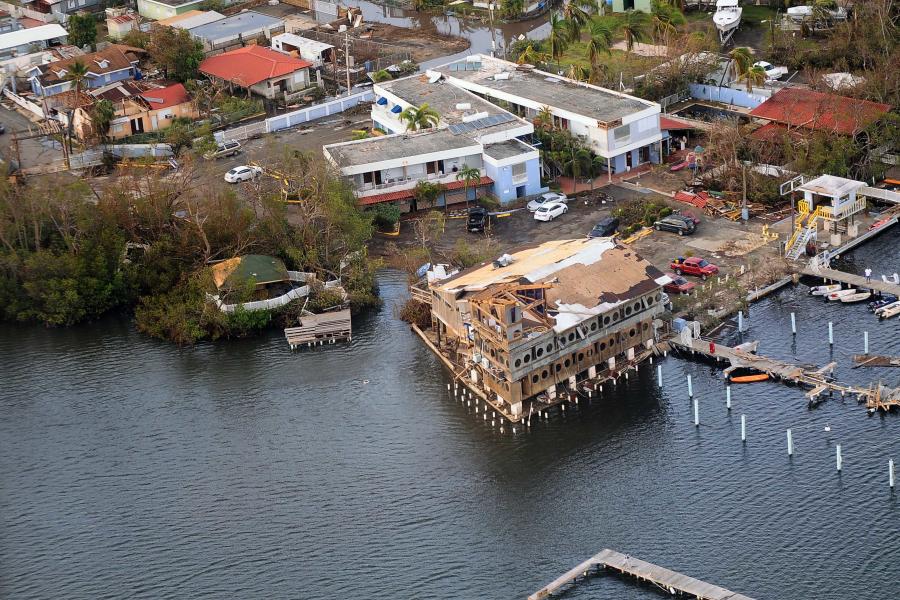 On Sept. 20, Maria ripped across the island with winds of up to 154 mph, killing dozens of people and causing damages estimated at up to $95 billion. (U.S. Department of Agriculture photo)

Homeland Security Secretary Kirstjen Nielsen said officials talked about areas “where things are not moving as quickly as they could,” speaking during a one-day trip to the U.S. territory with Housing and Urban Development Secretary Ben Carson.

Nielsen said federal officials will look into how to help get more supplies to Puerto Rico to speed up power restoration as well as provide federal assistance more quickly and possibly open more recovery centers across the island.

She noted that the number of people who registered for financial assistance in Puerto Rico after the Category 4 storm is greater than all those from hurricanes Katrina, Irma and Sandy combined. On Sept. 20, Maria ripped across the island with winds of up to 154 mph, killing dozens of people and causing damages estimated at up to $95 billion.

“This was an unprecedented storm,” Nielsen said. “We will not rest until the families here are back in their repaired homes, until parents are back at work, children are back at school and communities are back to life.”

Nielsen and Carson did not visit any areas affected by the storm and instead met with local and federal officials to talk about the recovery process that many Puerto Ricans have complained has been inadequate and slow.

Power generation is at 65 percent of normal, with nine of Puerto Rico's 78 municipalities still completely in the dark, and the U.S. Army Corps of Engineers has estimated power will not be fully restored across Puerto Rico until May, more than eight months after the hurricane hit. In addition, more than 200,000 homes were damaged and more than 30,000 people have lost their jobs, sparking an exodus of more than 200,000 people to Florida alone.

Federal officials said they would focus recovery efforts on power restoration and housing, with Carson pledging to do what is needed to help Puerto Rico get back on its feet. He said his agency is considering practical steps to get people back into their homes, such as moving them into the first floor while the second floor is being repaired.

“We do recognize that the situation is different here than it is in Texas or Florida or many other places,' he said, adding that he understands the need to provide urgent housing. “We're quite willing to look at the regulatory burden and present appropriate waivers and changes.'

Gov. Ricardo Rossello has requested flexibility in how community development block grants could be used, among other things, as the U.S. territory awaits nearly $5 billion in funds pledged by Congress.

The governor said a lot more financial assistance is needed as he praised the visit by federal officials and said they were committed to establishing a sense of urgency especially with power restoration: “Puerto Ricans are U.S. citizens, and we deserve equal treatment in the aftermath of this event."