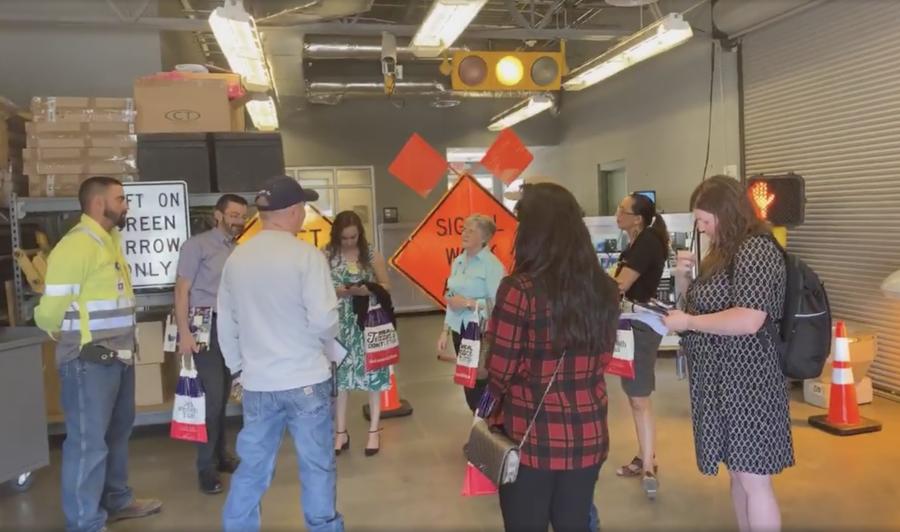 Texas Department of Transportation, El Paso District celebrated its 100th anniversary with an Open House at its district headquarters.

The TxDOT El Paso District celebrated 100 years in May. The district, which covers six counties (Brewster, Culberson, El Paso, Hudspeth, Jeff Davis and Presidio), is one of 25 TxDOT districts in the state, and is home to many Texas firsts, including the first diverging diamond intersection and in-pavement lighting located on Loop 375 and Spur 601; the first modern roundabouts on a state system at the intersection of Alameda Avenue (SH 20) and Paisano Drive; and the first and only state-owned international bridge.

"Transportation has come a long way in 100 years," said El Paso District Engineer Bob Bielek. "When you look at our district from El Paso to Guadalupe Pass to Presidio, it's amazing to see how some of our projects have improved and will continue to improve safety on our roadways and the way people travel. The sheer size and different climates of our district also make it incredible to think how many roadways our staff take care of on a daily basis. We cover over 20,000 square miles and 5,000 lane miles."

In the early 1900s, TxDOT's goal was connecting farms and ranches to market; today, it's safely moving goods and a population of more than 27 million across 80,000 miles of state-maintained roadways — even in the midst of historic growth in population and trade. The El Paso District is the largest TxDOT district by geographical area (21,709 square miles).

A week-long centennial celebration kicked off during the district's annual safety banquet. The El Paso District's Travel Information Center in Anthony, Texas, held a tourism fair, a proclamation at County Commissioners was planned and a public open house was held May 16 at district headquarters.

"Our public open house is an opportunity to come find out more about TxDOT," said Bielek. "Many people associate our work with construction projects only, but there is so much more our sections do — from travel information to design and environmental to signal shop work, material testing and traffic safety."