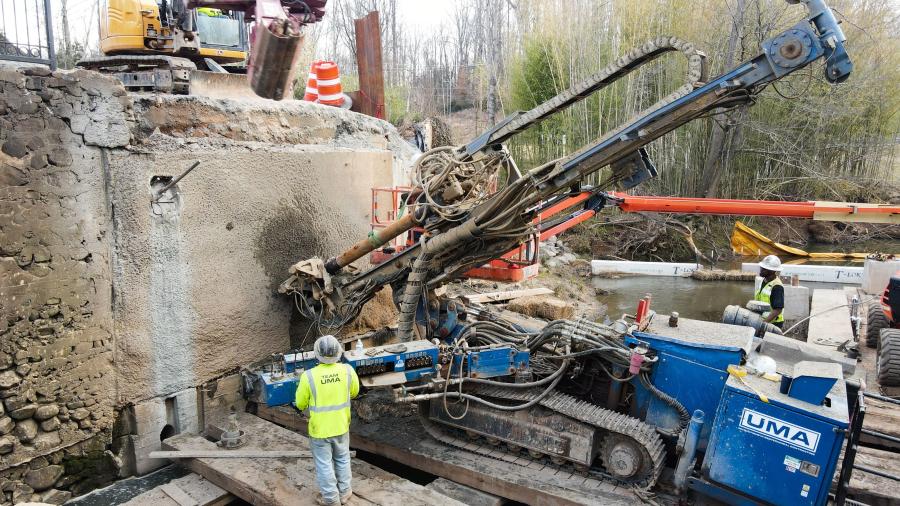 UMA Geotechnical Construction, a North Carolina-based geotechnical contractor serving the Mid-Atlantic Region, this past May helped its customer avoid failure of retaining wall structures during the demolition of a bridge spanning Blanket Creek in the Winston-Salem area.

UMA, under its subcontract with Kernersville, North Carolina-based National Bridge Builders, installed 14 ground anchors on the two retaining walls that were being held in place by the span that was to be demolished and could have collapsed if not properly secured independently prior to demolition. Traffic had already been rerouted to the new replacement bridge.

"Throughout the duration of this project UMA was faced with two main challenges in order to properly and safely install the anchors," said UMA President Brian DeSpain.

First, the UMA crew had to attach the top of the anchors through the existing bridge deck in order to achieve the proper installation angle. The anchors could not be installed from below the bridge because that path was obstructed by the bridge itself.

UMA used duplex drilling to advance both casing and drill steel into each hole simultaneously to keep them from collapsing. After reaching the required 30- to 50-ft. hole depth, UMA installed 30- to 54-ft. anchors inside the steel casing, with lengths varied based upon location and bar sizes of either #6 or #11.

The second challenge was that the two retaining walls are positioned on either side of an active creek, fed by the nearby Lasater Mill Pond. To achieve the correct anchor installation position, UMA opted to use a semi-elevated platform constructed using crane mats. This allowed field technicians to use the appropriate drill angle while water flowed freely in the creek.

"The successful completion of any project relies on the management and technical skills of the construction team, both in the office and on site," DeSpain said. "It's because of the expertise and teamwork of the employees at UMA that the retaining walls were able to be properly secured, a critical step to a safe bridge demolition."