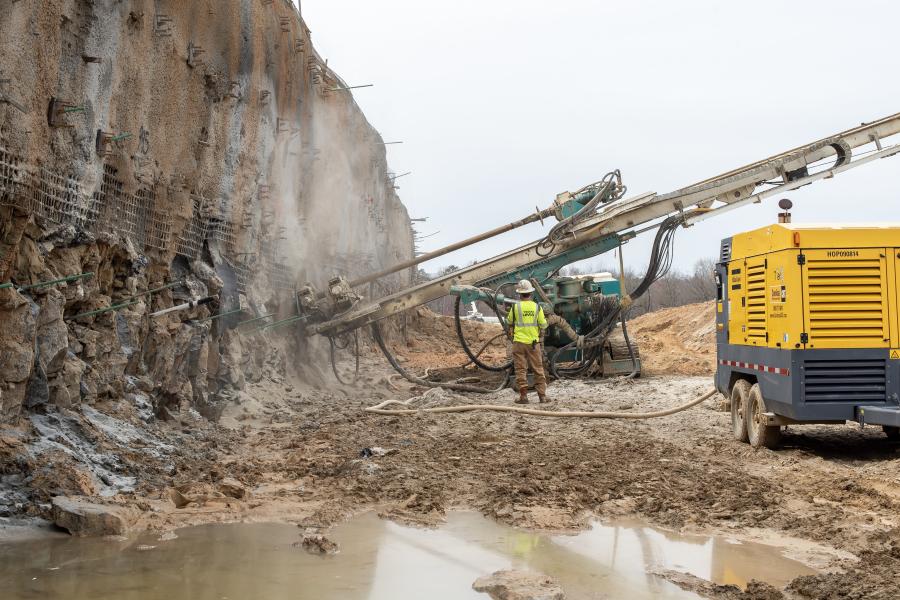 UMA Geotechnical Construction constructed all of the eight required permanent soil nail walls along a roughly 2-mi. stretch of the Greensboro Western Loop (Interstate 73) project but they were all dwarfed by the Wall 4. To be exact, the total project required 76,000 sq. ft. of wall, 42,000 of which was Wall 4.

UMA was a subcontractor to Colorado-based Flatiron Construction Corp., which had been retained by North Carolina Department of Transportation (NCDOT) to build a 1.5-mi. divided highway around Greensboro between Battleground Avenue and Lawndale Drive.

"The state identified the locations and it was up to us to figure out how to design the most cost-effective system."

UMA submitted a proposal in November 2016 and began work in mid-2017. Its engineers submitted drawings for Wall 4 in 2018 and finished construction in April 2019.

UMA is no stranger to working closely with the NCDOT, which represents the majority of its public sector work.

UMA's scope on Wall 4 was straightforward. The job was essentially to install soil nails and a temporary shotcrete facing to allow Flatiron to finish it off with a cast-in-place concrete wall. However, due to adverse geotechnical soil conditions, a simple install became increasingly more challenging.

In a budget-saving triumph, UMA's proven history and competent personnel made light work of the challenges.

At just over 30 ft., the height of Wall 4 towers over you when standing at its base. 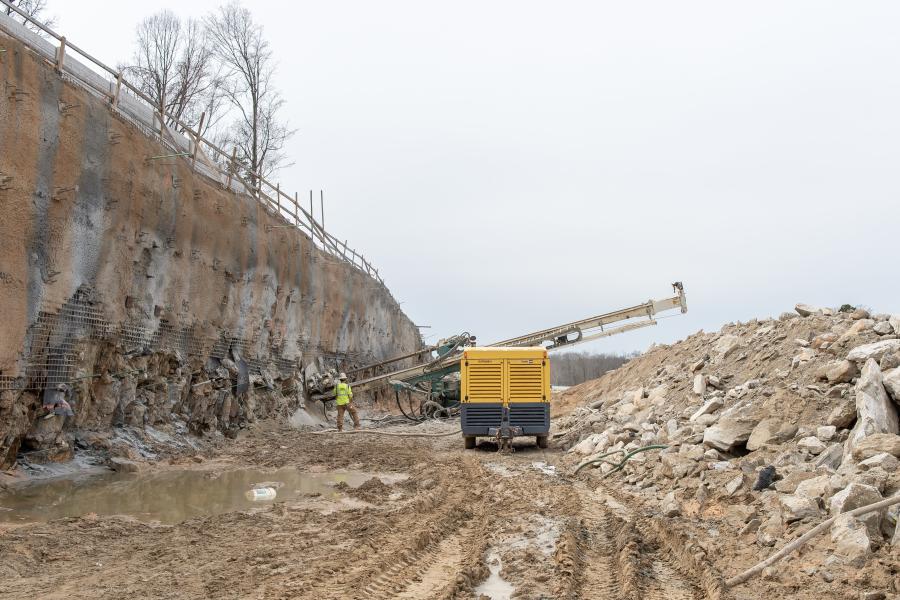 "Most project prequalifications that enable your company to bid on a soil nailing project require that you have completed 2,000 soil nails in the last five years," said DeSpain. "This one wall is in excess of that requirement."

How did UMA install soil nails on a wall that was higher than 30 ft. in some locations?

In lifts, of course.

Flatiron handled excavation and the cast-in-place concrete wall, which required UMA to work between its crews for most of the project. 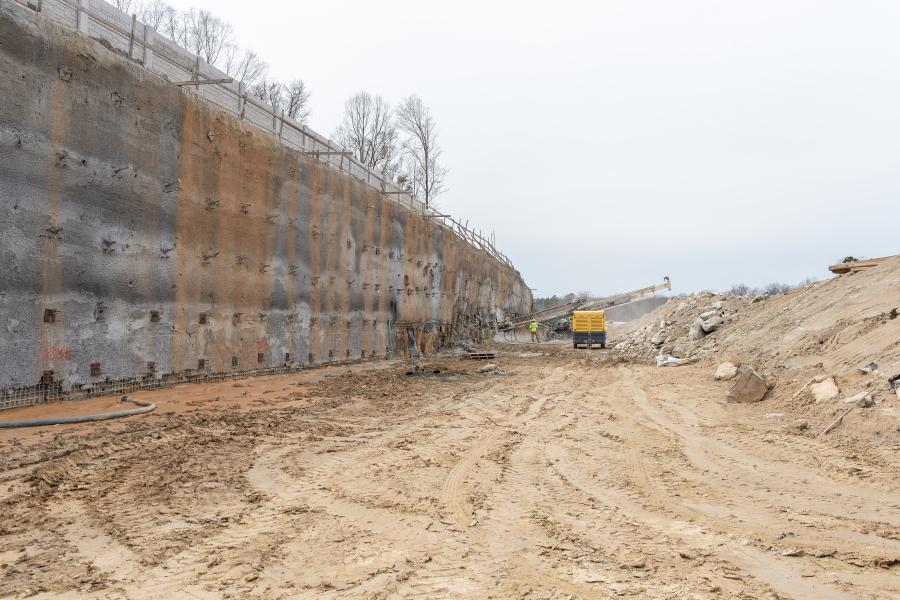 Flatiron's first step was to cut the hill down 30 ft. to reach the road base with a fleet of four Komatsu excavators and 18 articulated loaders. This mass excavation ultimately exposed Wall 4.

UMA's drilling crew worked the wall from one side to the other. Each lift the excavation crew cut out provided a successively lower working platform for the drilling crew.

UMA completed most of Wall 4 with a single drilling rig — a Casagrande C7 — one of the largest soil nail rigs on the market. 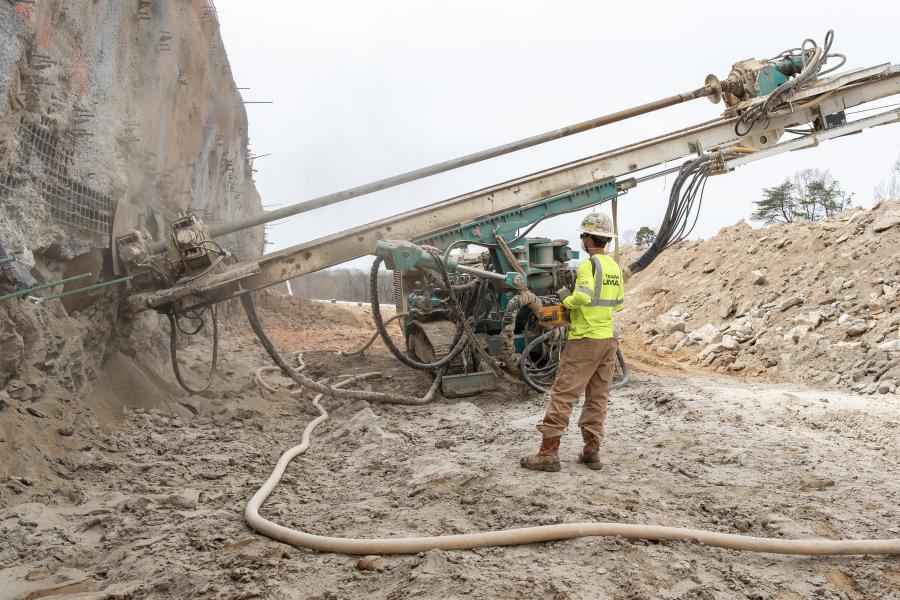 A balance was required to work in between Flatiron's crews. The excavation crew, hindered by wet weather and cold temperatures, persevered to provide UMA with as much access as conditions permitted. The cast-in-place wall crew, on the other hand, required more time to handle formwork, pour concrete, wait for it to cure and remove the formwork due to the sheer magnitude of this enormous wall.

Using a single rig on this massive wall was intentional, according to DeSpain.

"We designed the wall around the 30-foot stroke of the machine," he said, noting that this simplified the operation by allowing the operator to work alone without support from others.

"There were days where he was drilling 100 soil nails in a day by himself."

UMA bought the Casagrande C7 Drilling Rig specifically for the Greensboro Western Loop project. It was the first of two C7s that UMA has purchased from North Carolina-based International Drilling Equipment.

"We felt that it was appropriate to buy a new machine because of the size and the length of the project," DeSpain said. "We basically had one crew on the entire project for two years moving from wall to wall."

It took more than 2,000 soil nails to complete Wall 4. The length ranged from 15- to 50-ft.-long, although the vast majority were 30 ft. The C7's 30-ft. stroke allowed UMA to drill most holes with a single stroke. A chevron bit was used to drill and air was used to extract the cuttings, leaving an open 6-in.-diameter bore hole. 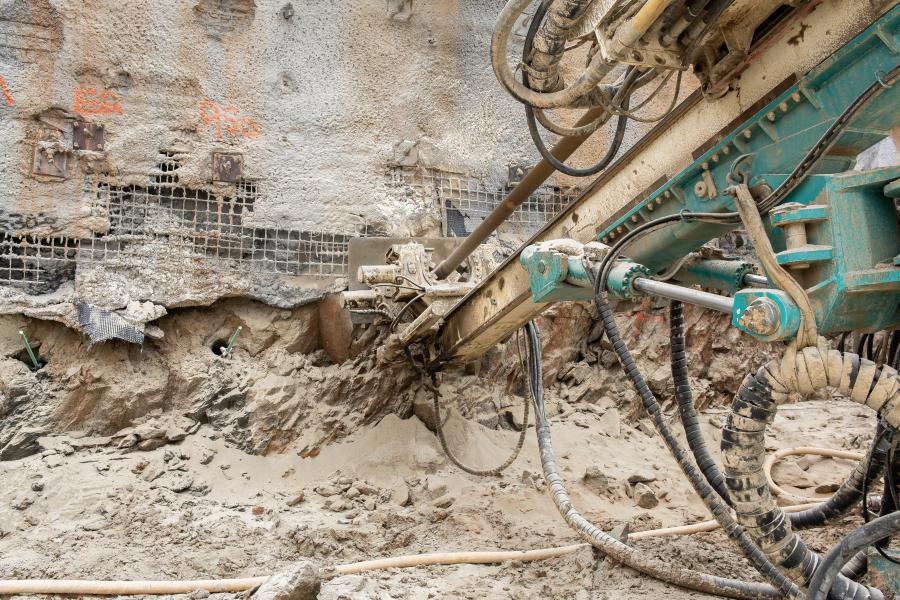 The rig has no carousel to hold additional drill rods so deeper holes required the support of an EZ Spot UR grapple mounted on a mini excavator. The C7 would drill the 30-ft.-hole and the grapple was used to set another drill rod to accommodate the additional depth.

Almost 800 tons of Type I/II cement was supplied by Roanoke Cement and mixed on site with a Colcrete Grout plant. Aiming for a 1.85 specific gravity, a mud balance was used to measure the specific gravity of the grout and ensure the proper mix, which included Type I/II Portland Cement, water, and admixtures. Once the tooling was extracted, the hole was filled to capacity with grout pumped through a tremie tube, monitoring volume via a magnetic flow meter.

Once the grout emerged from the hole, UMA's crew inserted the bar. Most of the soil nails were anchored by pure friction with the soil. Those in the decomposed Granite areas were bonded to the rock.

UMA's engineers determined that 5-ft. horizontal by 5-ft. vertical spacing was the most cost-effective means to support the soils and critical structures behind Wall 4. The anchor pattern is based on several factors, according to DeSpain.

"It's a combination of the soil properties such as friction angle of the soil and the surcharge loading that's above the wall," he explained. The surcharge is the outward force exerted against the wall face by the weight of anything that sits above it.

The length of the soil nails is partly determined by the failure plane behind the wall, which is the assumed location at which the global stability of the structure could fail.

"The nail should be installed past the failure plane to bring the factor of safety up to the FHWA-required 1.5," DeSpain said.

UMA's next step was to install a 4-in.-thick temporary shotcrete facing. Steel bearing plates were installed over the head of each soil nail while the shotcrete was still wet. That was secured with a bevel washer and hex nut. The corners of the plates had 5-in. Nelson studs, equally spaced to transfer the cast-in-place load to the soil nails. 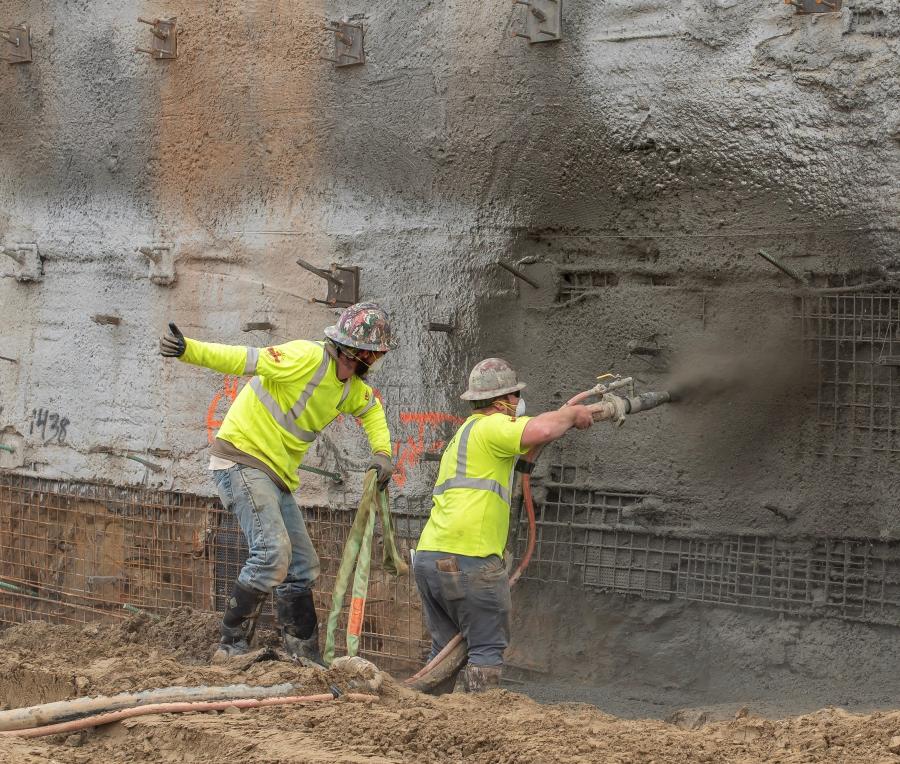 The 4-in. thick, 4,000-psi shotcrete wall was strong enough to hold the wall in place until the final cast-in-place wall was built in accordance with FHWA guidelines.

"The shotcrete behind the cast-in-place facing is ancillary to this type of design," DeSpain said. "The temporary shotcrete isn't necessary to the final design of the wall — in this case it was a means to facilitate Flatiron's cast-in-place pour."

Flatiron's cast-in-place crew took over at this point. They tied rebar cages to the Nelson Studs and assembled formwork over the shotcrete face. A 12-in.-thick concrete wall was then poured between the two to complete the finished wall.

This wall is what motorists will see when driving along the Western Loop, according to DeSpain.

"The cast-in-place wall is like an aesthetic finish," he said." It basically finishes the wall."

Unlike some walls UMA has designed and built with sculpted shotcrete, the finish of Wall 4 was specifically selected to complement the proposed sound barrier walls to bring an aesthetically pleasing view to an otherwise lackluster means of earth retention.

Soil conditions were mostly moderate with some areas proving more difficult, which allowed UMA to concentrate its efforts on the sheer size of Wall 4. A large portion of the wall was constructed in a low-quality decomposed granite, which is typical in this part of North Carolina. The remainder was a Piedmont soil, which is a reddish alluvial soil with silt and clay.

"This soil type has some cohesion so when you drill in it, it generally wants to stay open," said DeSpain, noting that UMA has drilled in challenging soil conditions ranging from the glacial till of southern Pennsylvania to the compressed seashells of coastal South Carolina.

"We faced challenges trying to keep the holes open in the fracture rock, but it wasn't overly difficult due to the experience of our team and the specially selected drilling and grouting equipment for the project."

Production soared because UMA assigned a large crew, "There were only four people assigned to the other walls on the project, said DeSpain. "We added more personnel on Wall 4 to not only deal with the size of this wall, but also to increase our productivity."

Teams were dedicated to drilling, preparing the wall for shotcrete, grout mixing and applying shotcrete. The chain of command included a superintendent with several foreman supported by a roster of seven field personnel. There was also a field engineer to ensure load testing was completed and quality control was adhered to as well as assistant project manager for adequate material procurement. A project manager kept the work on schedule and maintained the expected budget. 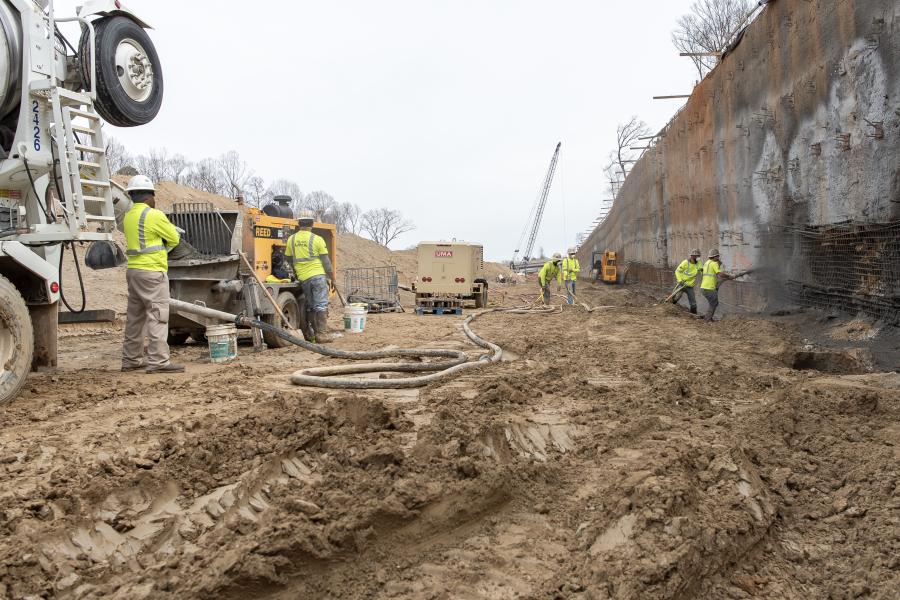 UMA's production approach was to create repetition and eliminate uncertainty to the greatest extent possible, according to DeSpain.

"We asked, how can we design the wall to be built in a way that is a repetitive process and can be constructed faster? We wanted to keep the bar and hole sizes consistent to avoid having to cut anything on site."

UMA's focus was to make sure crews could seamlessly select the appropriate materials, set them in place, and move on as effortlessly as possible.

Despite the magnitude of Wall 4, not to mention the other seven walls, UMA delivered the project ahead of schedule. One more future project will complete this beltway around Greensboro. Most drivers won't notice the massive wall towering alongside the roadway as traffic flows along the new beltway, but UMA and Flatiron will remember the smooth partnership that turned a large hill into a new stretch of highway.