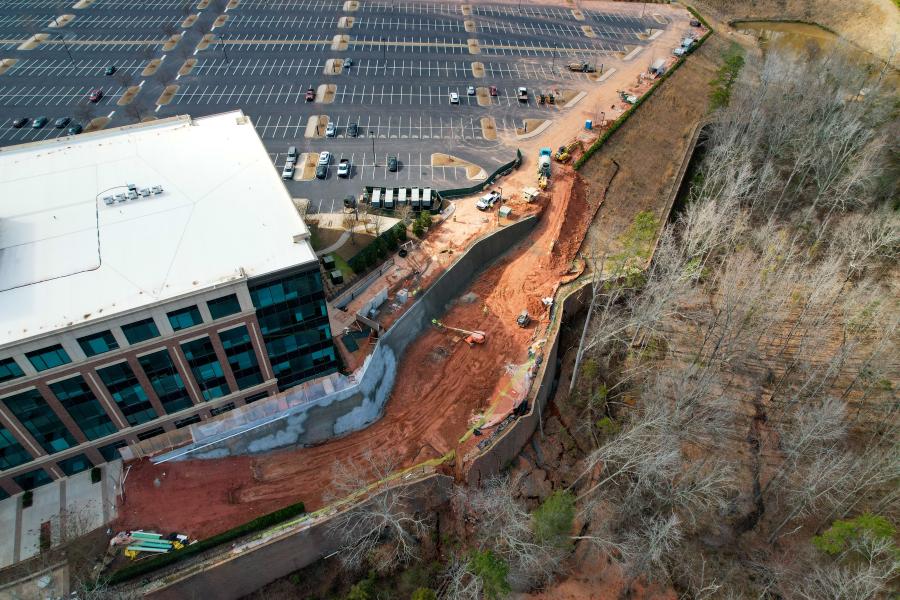 Stabilizing a mechanically stabilized earth (MSE) wall in proximity to an occupied five-story glass office building was a task unto itself for UMA Geotechnical Construction and its team of engineers.

The need to revise plans three times during construction and work near the wall when it unexpectedly started rapidly failing, however, proved to be one of the greatest challenges on this project.

"A 300-foot section of the wall began to rapidly move horizontally and vertically simultaneously," said UMA's President Brian DeSpain. "We've worked on hundreds of earth retention projects over the years, but never one with this magnitude of movement."

The site included a modern, five-story glass office building in Fort Mill, S.C., with frontage on Interstate 77 and atop a winding MSE wall overlooking a lake. The wall in question had been constructed and was functioning without any major signs of movement for five years. Below the wall was a thick buffer of trees on a downhill slope leading to the banks of Lake Patricia. The building sits on a site of several acres with extensive parking and detention basins.

The existing MSE wall was 1,033 ft. long and 32 ft. tall at its highest point. Behind the building were five large emergency power generators on a concrete slab to keep the building systems up and running in case of a power outage. 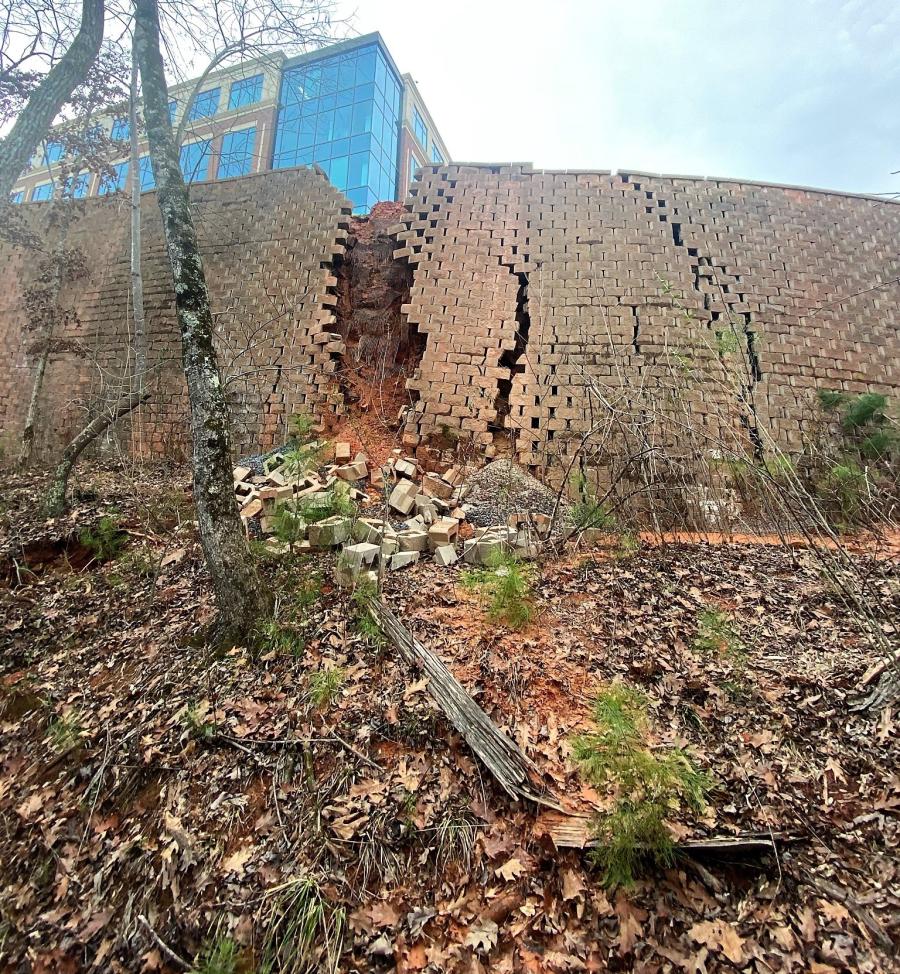 UMA was contacted by Terracon Consultants and Engineering Consulting Services (ECS) in summer 2021 to look at the existing MSE wall, which had been showing small signs of movement over an extended period of time. The movement was limited to the middle 300 ft.

ECS got involved in 2018 when it surveyed the top of the MSE wall and began monitoring settlement, according to ECS' Marc Plotkin, who specializes in earth retention and deep foundations. Plotkin served as the company's principal engineer at the time.

"This is a steel-frame building that was built in 2016," he said. "We were seeing distortions and movement of the columns. We got involved in the project about 2017 or 2018 because the building and generator enclosure were exhibiting signs of settling and distress."

ECS conducted a forensic study to identify the cause of movement in the building and the best solution. The generator enclosure was skewed at a 30- to 45-degree angle at the time. There were many factors to consider including the proximity of the patio to the MSE wall, the grade of the slope between the slab and the wall, and the backfill material.

Plotkin recalled that the MSE wall looked solid leading up to the failure. ECS was only measuring vertical deformations at the time and seeing minimal lateral movement. The team was surprised and concerned that the movement was concentrated on the two exterior building corners closest to the MSE wall, as opposed to being evenly distributed across the entire face. Increased movement and steepening of the slope near the generator enclosure exacerbated their worries; however, the wall showed no visual signs of distress.

Although ECS did not see an increasing rate of settlement in 2018, it recommended underpinning two of the corner building column foundations with 8 to 10 cased micropiles in 2019. The generator enclosure was underpinned with 10 to 12 helical piers. The intent was to prevent further deformation of the building columns and save the generator enclosure. 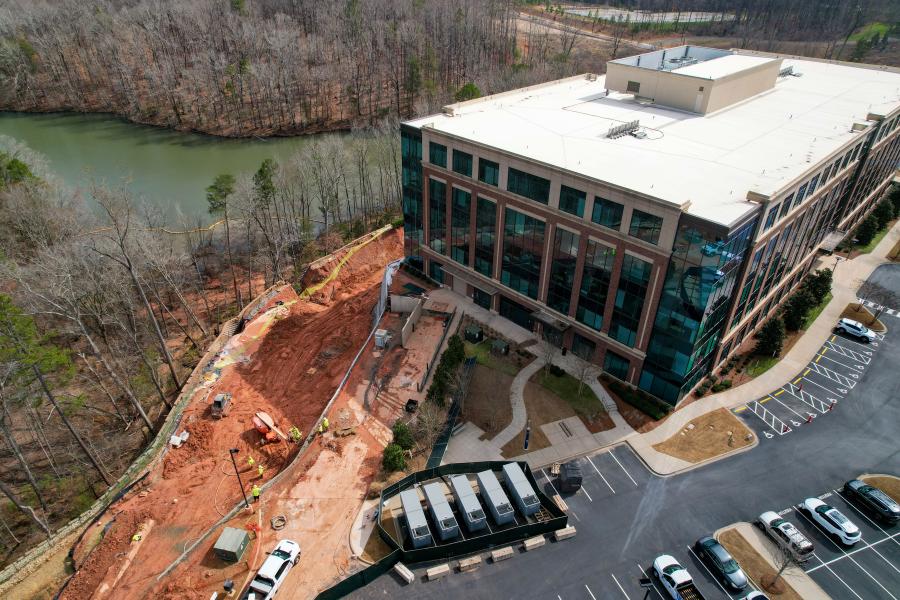 The MSE wall was directly below an occupied modern, five-story glass office building in Fort Mill, S.C. UMA and its engineers had to revise plans three times during construction and work near the wall when it unexpectedly started rapidly failing.(UMA Geotechnical Construction Inc. photo)

The safety of the building occupants and field workers was paramount. Employees at the office building were able to continue working during construction due to underpinning that was done in 2019, ECS set up inclinometers on the wall and pinned locations on the building that would serve as a warning system if it needed to be evacuated at any point. The existing micropile underpinning would allow more than enough time for that to occur.

ECS had installed inclinometers at the end of the underpinning and started seeing an accelerated movement in the inclinometers in 2021, which meant the slope and wall were starting to move. Cracks opened up in the generator enclosure and along the rear of the building.

There were many contingencies in place to monitor the safety of the site, but Plotkin ultimately bore the weight of determining if the site was safe to work on.

He gave UMA credit for seeing the project through.

"I don't know if every contractor would have stuck it out," said Plotkin. "They were essentially working on top of a failed soil mass." 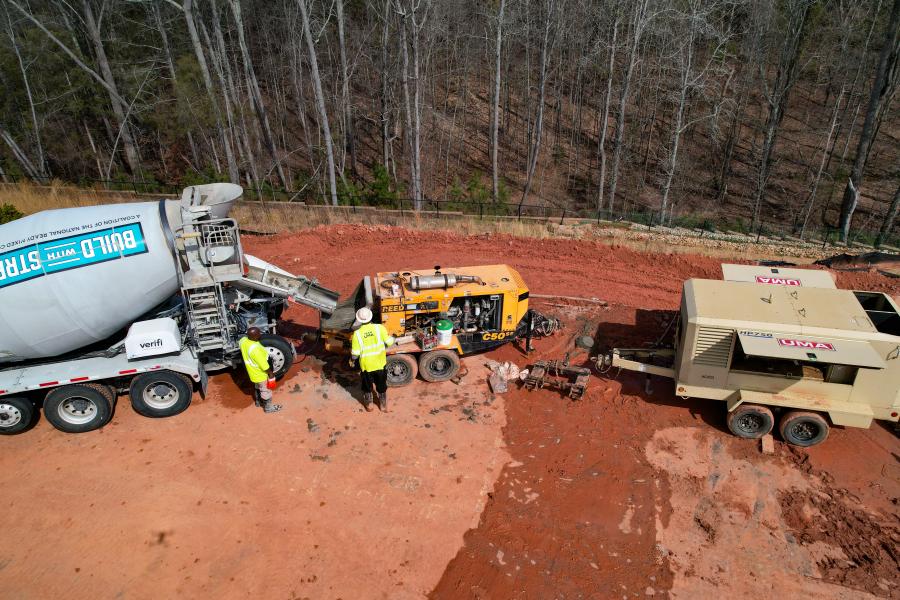 UMA was hired directly by the owner of the building. The wall had been in place for five years at the time.

UMA brought in Triad Geotechnical Consultants (TGC) of Greensboro, N.C. as a consulting engineer to evaluate the preliminary designs for pricing, and ultimately to develop the final design. TGC and UMA have partnered on numerous Design-Build projects in the past.

During its first five years in existence, the wall moved 1 ft. horizontally and 1 ft. vertically and was showing small signs of deformation on the face. The owner initially wanted UMA to design and build an anchoring system to stabilize the face of the MSE wall. The intent was that soil nails would be drilled through the face from a safe area atop the MSE wall, followed by spraying a 6-in. shotcrete face over the block. That design was nixed due to accelerated wall movement after construction began.

The primary design was created that focused on protecting the building and generators because of the accelerated wall movement.

The secondary soil nail wall design would utilize 20- to 30-ft.-long #8 steel tendons and a shotcrete facing to retain the wall from further movement. The placement of this wall would be located above the failing MSE wall and below the building and generators to hold both in place to facilitate the construction of the MSE wall repair.

Helical piles were installed and attached to the generator slabs in an effort to try and take some of the weight off of the slope above the MSE wall in hopes that this would reduce the amount of movement that was being experienced.

"Our intent was to remove the surcharge load from the generators," said TGC's Harshman. "We did not want to stabilize that load with the soil nails." 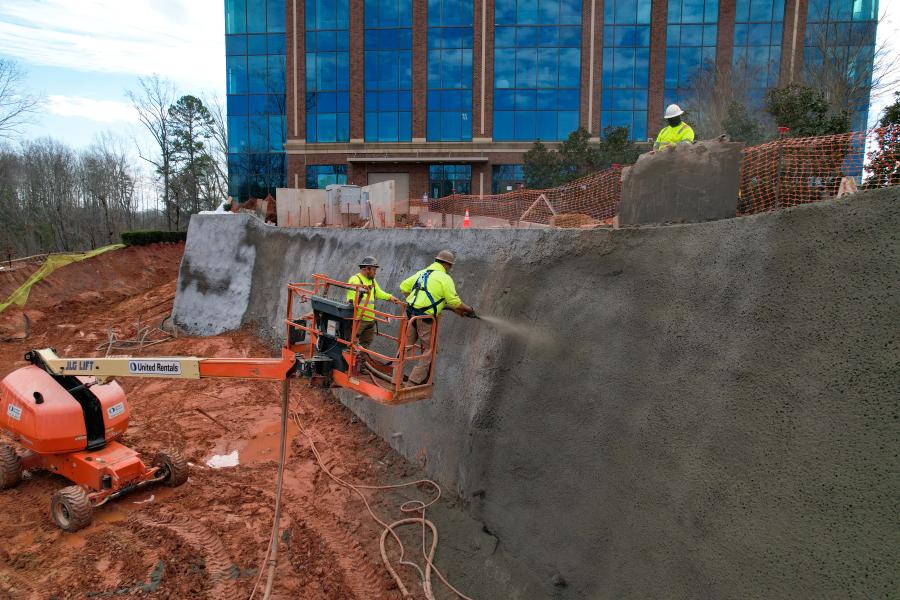 UMA proposed to the owner and the design team that a 4,600-sq.-ft. permanent soil nail wall with reinforced shotcrete facing was required since a 3:1 slope to connect the building with the grading below the MSE wall was impossible. (UMA Geotechnical Construction Inc. photo)

UMA had begun implementing the first soil nail wall design when the MSE wall failed in lateral sliding. "Over the course of weeks, the wall moved an additional 10 feet horizontally and 10 feet vertically," said UMA's Brian DeSpain. "There was no option but to abandon the secondary repair plan."

"One of the unique things here was that this project required a full redesign, and basically punting from when UMA mobilized to what ultimately had to happen," said Plotkin. "If the wall hadn't failed, it would have been a matter of trying to stabilize the MSE wall in place."

"We came up with a soil nail stabilization system for the wall," said Harshman.

"There was no chance of saving the generator enclosure at this point."

Nearby was a loading dock area, access drive, collector cabinet, and electrical service lines that were connected to the generator. The placement of the soil nail wall would allow these areas to stay in place and save the building.

UMA redesigned the repair plan to include deconstructing a portion of 300 linear ft. of the failed 30-ft.-high MSE wall, while simultaneously constructing a soil nail wall to retain the soil below the building and underpinning the building with micropiles.

UMA proposed to the owner and the design team that a 4,600-sq.-ft. permanent soil nail wall with reinforced shotcrete facing was required since a 3:1 slope to connect the building with the grading below the MSE wall was impossible. The 250 soil nails needed to be long enough to stabilize the excavation to permit construction of the slope. These nails ranged from 20 to 50 ft. long. Within 10 ft. of the building, a gradual transition with grading was impossible. The path of the wall meandered to avoid the tension cracks that formed during the failure.

The grading was between the building and MSE wall and also required additional underpinning along the rear side of the building. UMA accomplished that with four additional micropiles to stabilize the building close to the failed MSE wall.

UMA had just gotten equipment on-site to start phase one, when the wall started moving very rapidly and shifted 10 ft. laterally and 10 ft. vertically, but the soil mass stayed intact. In fact, very few blocks dropped from the MSE wall. Tension cracks were discovered parallel to and behind the wall and a depression in the ground formed behind the geogrid. Cracks widened daily, leaving openings large enough to swallow a compact car. Additional cracks opened at the foot of the wall, which slopes downward to the lake. As the wall moved forward it heaved the ground, toppling trees and cracking the ground.

The property contains Piedmont Residual Soil, which is relatively stable, according to Plotkin. "At some point the slope above the wall started to move sufficiently enough to develop tension cracks. They continued to open up, to the point where we're able to leave a really good water intrusion location. It allowed that tension crack to propagate to the MSE wall, until eventually as we would get rain, that tension crack would fill, load the wall, and force it to shift laterally.

"Continuing to work, and the fact that they [UMA] engineered a plan as we were out there in the field is really what saved the structure," said Plotkin. 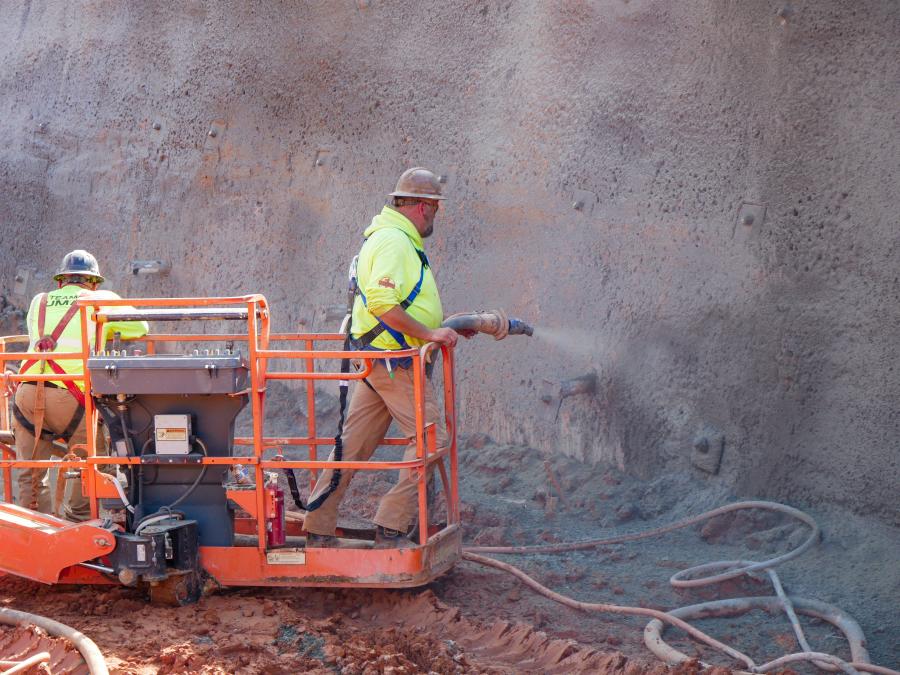 UMA's work on the MSE wall concluded safely and successfully in spring 2022.

Despite the previous challenges, the project was uneventful. The project received the GeoVirginia 2022 Outstanding Geotechnical Engineering Project award on April 13.

"This was a very unique and exciting project in our industry," said DeSpain. "I hope it will help to provide some lessons learned to future wall designers."

Aside from the geotechnical feats, perhaps the greatest lesson on this project was the importance of a well-functioning project team, from an engaged owner to a strong partnership between a contractor and multiple engineering firms to agree on a Design-Build approach on the fly. 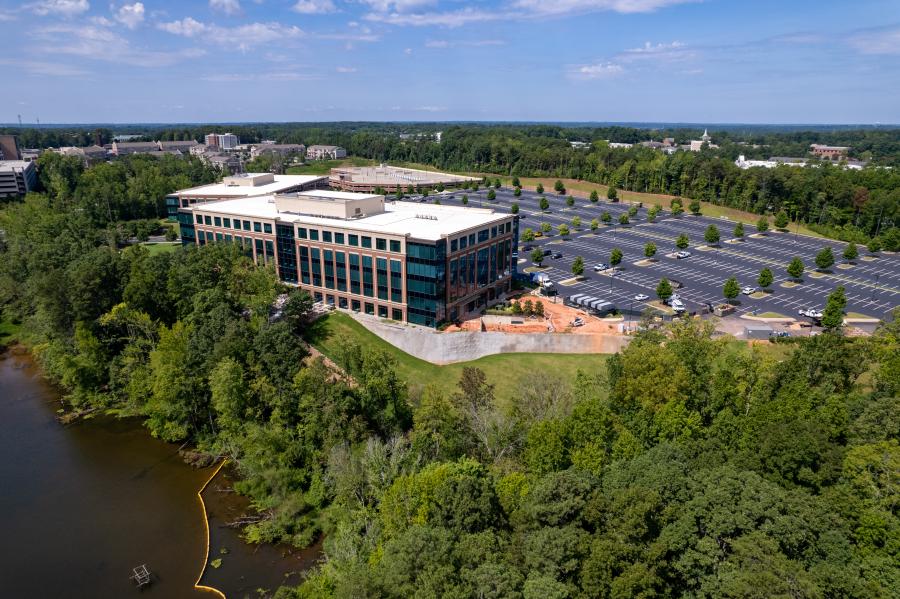 The award-winning project was safely concluded in spring 2022 due to a well-functioning project team. (UMA Geotechnical Construction Inc. photo)