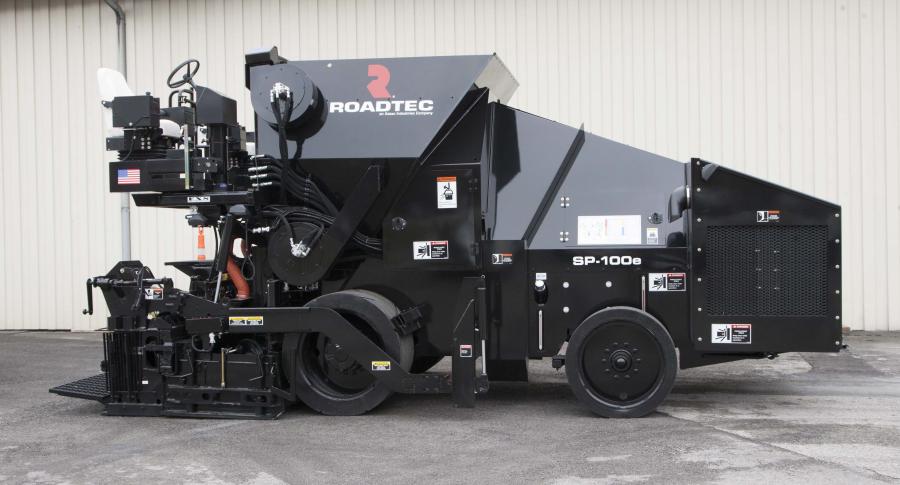 The SP-100e accepts the asphalt material at the top of the machine, where gravity feeds the material through flow gates directly to the auger.

Roadtec denies it, which automatically casts a blanket of suspicion. The question: Does its SP-100e Stealth Paver share the same capabilities as the F-117 Nighthawk and the B-2 Spirit Stealth Bomber in terms of an ability to avoid detection by radar, infrared, visible light, radio frequency spectrum, and other means. If the Roadtec machine does in fact employ stealth technology, it will likely never be willingly revealed by the company.

The Roadtec SP-100e Stealth Paver is an all-black machine, which distinguishes it from the rest of the company's offering of white machines. The exterior color of its Stealth is something it clearly shares in common with stealth aircraft. Coincidence? One has to wonder.

In addition to its radar deflective black exterior (OK, I'm making an unproven assumption, but come on….. you paint the machine black and make it look cool and a bit foreboding AND name it Stealth…. AND then deny it has special anti-radar powers?!), the SP-100e has features that are unconventional for a traditional asphalt paver. These features include:

• The SP-100e Stealth Paver is gravity fed. There are no slat conveyors, hopper wings, push rollers, tandem front boggies, or other mechanical apparatus pushing the HMA along. The SP-100e accepts the asphalt material at the top of the machine, where gravity feeds the material through flow gates directly to the auger.

• The paver is one half of a team. To work, the SP-100e is paired with a material transfer vehicle (MTV), such as the Roadtec Shuttle Buggy. The MTV keeps the flow of hot-mix asphalt, which contributes to the quality of the finished surface.

• Operator comfort is paramount. The machine can be operated from either side of the paver. The operator platforms with ergonomic seats and controls can swing out for better sight lines and they are perched up higher than most machines. The paver also has a very cool airflow system that creates a barrier near the back wall of the hopper. This air curtain feature pushes the asphalt fumes and heat up and away from the operator platform.

In the end, just like the military stealth aircraft, the Roadtec SP-100e Stealth Paver is designed to precisely execute its mission… paving a smooth-finish mat.