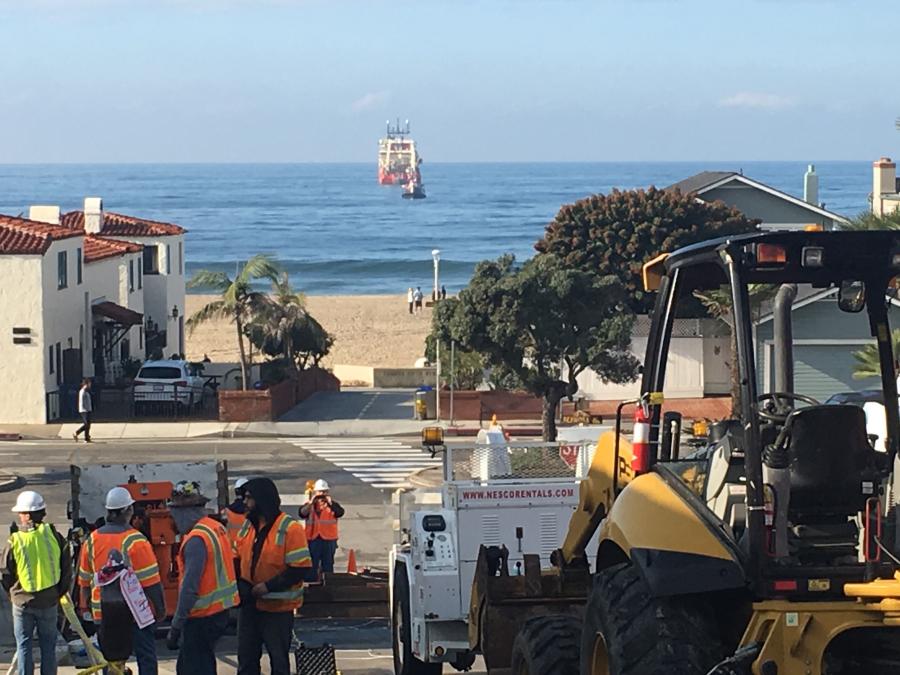 With the job sites located a block from the Hermosa Beach shoreline near expensive residential properties, ARB Underground was very cognizant to keep noise and other disruptions to a minimum.

Fewer than 20,000 people call the waterfront city of Hermosa Beach, Calif., home. Situated on the Pacific Ocean, near California's Pacific Coast Highway and The Strand — the famous bike path that runs 22 mi. along the coast — the city is a hotspot for fun and sun. And as of this year, it's also the final link in a $250 million-project chain that began thousands of miles away.

In 2014, five international telecommunications companies formed a consortium to build a cable system between Southeast Asia and California. Beginning in Manado, Indonesia and traveling to Davao, Philippines, through Oahu, Hawaii, and ending at Hermosa Beach, Calif., this system spans more than 9,000 mi. from the Philippine Sea to the Pacific Ocean — all underwater.

The system, known as the Southeast Asia-United States (SEA-US) submarine cable system, was designed to improve internet speeds and increase broadband capacity between the continental United States, Hawaii, Guam, the Philippines and Indonesia.

The final portion of the SEA-US project, a shore approach at Hermosa Beach, would be led by local contractor, ARB Underground, part of Primoris Service Corporation. But even before work began, the company realized the nature of the project and a few unique jobsite challenges meant some new strategies — and new equipment — would be required to complete it.

One of ARB's specialties is horizontal directional drilling (HDD) for underground infrastructure. With a staff that includes a general superintendent, drilling superintendent and Jody Parrish, HDD division manager, ARB knew it could handle the Hermosa Beach phase of the SEA-US project and decided to prepare a bid.

As Parrish prepared the bid for submission, he took note of the project scope and jobsite characteristics, and quickly realized he'd have to add one more key player to the team roster: the HDD unit itself. To find the right drill for this unique job, he looked to RDO Vermeer.

With locations from Minnesota to Texas, Primoris and RDO Vermeer had partnered for more than two decades, in several cities and on numerous types of projects. Primoris and ARB were very familiar with Vermeer equipment, operating a variety of its machines throughout the years — including horizontal directional drills. Yet, as Parrish realized early on in the bidding process, nothing the crew had operated before was going to fit the bill for the Hermosa Beach project.

First, pilot holes would be drilled under the beach, two each at two neighboring locations. Drill pipe would push the hole beyond the beach and extend into the ocean. The drill pipe would remain underwater as conduit for the cable coming from Oahu.

There were two main sites where work was to take place, each about a block from the Hermosa Beach shoreline, which, according to Parrish, posed a set of challenges on its own.

“The neighborhood is expensive beachfront property,” he explained. “We would have to interface with the public and ensure disruptions were kept to a minimum.”

The limitations, combined with the project's tight timeline — just eight weeks for four bores — meant efficiency would be another high priority.

Finally, and most concerning of all, the designated work areas were small and narrow, in spaces measuring approximately 130-ft. by 30-ft. To put that in perspective, the total jobsite footprint was about the same width and only a bit longer than a tennis court. The crew's third and top priority would be to maximize every inch of workspace it had.

“First and foremost, the drill we chose would have to fit in the limited area,” Parrish said. But, keeping the other jobsite priorities in mind, he also needed something that didn't skimp on performance.

“The machine would still need to provide the drilling power and speed of operation to complete the project on time,” he said.

As he began looking for the right drill to fit the three must-haves of the project — size, power, and speed — Parrish had a unit in mind: the Vermeer D330x500 Navigator horizontal directional drill. This was a drill that Ken Hugen, RDO Vermeer general manager of sales agreed would be the ideal fit for the job because it would meet the project's must-haves.

Number One Must Have: Size

With a job scope that included moving 30 ft. wide by 5 in. diameter (9.14 m by 12.7 cm) drill steel, a crane was not a luxury — it was a necessity. The Navigator's onboard crane would save the crew from having to bring a crane on site and take up valuable workspace.

Number Two Must Have: Power

Because of waves and sand movement that occurs near shore, the drilling would have to extend out into the ocean, beyond the beach break where the ocean floor is more stable. The Vermeer drill's power ensured it could meet this requirement of drilling 3,000 ft. (914.4 meters) out into the ocean, navigating different types of underground terrain along the way.

Number Three Must Have: Speed

ARB had to complete the shore approach phase of the project in just eight weeks, while keeping on a daily schedule that would not disrupt the community's residents.

The D330x500 Navigator is self-contained, which made setup fast and easy for ARB. And in addition to saving precious jobsite space by having the drill and crane on one machine, it would also save the company the time (and expense) of having an additional machine to operate and maintain.

ARB secured its drill and submitted the project bid to RTI, the lead architect of the SEA-US consortium. After winning the project, Parrish prepared his team and all the equipment, mobilized, and began work on Sept. 19, 2016.

Armed with a drill that he was confident would stand up to the challenges of the project, Parrish and his crew were eager to get to work. Also, ready to get the project under way was RTI.

“We had been working with residents and city officials for two years prior to starting construction, to prepare them for what was coming,” said Chris Brungardt, RTI senior vice president, regulatory compliance.

Brungardt's team was well-aware large, directional bore projects were challenging and unpredictable, and in this case, concerns were magnified due to the bore sites being located on narrow city streets, near existing utilities, and, as Parrish noted early on, extremely close to high-value homes.

Another challenge ARB discovered early-on was the tight space meant there was no room on site for extra materials or equipment. ARB had to precisely coordinate delivery and removal of materials and extra equipment to keep the area clear. No matter what other challenges came up or what type of material they encountered during drilling, the ARB team powered through. Brungardt and RTI were, “continually impressed by the crew's problem-solving abilities.”

When all was completed, the path, including the two original holes at each site formed a V-shape. This also brought an added element that Parrish and his team weren't used to.

“Typical drilling projects we do are all on land, requiring drilling from surface to surface,” he explained. With three quarters of this project occurring underwater, a marine contractor, divers and a few extra precautions were required. The crew added rhodamine dye to the drilling fluid. Red in color, the dye would show up on the divers' spectrometer, alerting of any fractures. Luckily, the project went smoothly and there were no fractures.

Also smooth was the crew's ability to keep RTI's promises to the city and residents. Brungardt commended the ARB crew for keeping noise and traffic restrictions to a minimum, while conducting themselves in a professional manner.

“We had zero complaints from residents related to ARB,” Brungardt recalls. In fact, residents were complimentary of the ARB crew, several contacting Brungardt to thank him for the accommodations ARB made for them.

As for how the Navigator performed on the job? “Excellent,” according to Parrish. He credits the drill with allowing the crew to finish on time and on budget. And, not only was the city pleased at the end of the project, RTI gave ARB nothing but high remarks.

“They rose to every challenge and performed admirably,” Brungardt said. “The project owners had a great deal riding on the project and knew the success or failure would be a direct result of how ARB performed. ARB was outstanding in every phase of the work and we could not be happier.”

After completing the HDD portion on time, Nov. 10, the ARB team had a small window of time to catch their breath before the next phase began.

“We came back on Dec. 12 and 13 to actually land the fiber optic cable from a ship offshore,” Parrish said.

The ship unloaded fiber optic cable onto boats positioned in the harbor. It was then transferred to the divers, who placed it inside the drill hole, underwater, then the cable was winched ashore. Once that was completed, the final clean-up phase at each location included pavement restoration and a slurry seal applied over the whole block to give a uniform look.

Of the four initial shots, only one has been used so far. According to Parrish, future plans are to run more cable to accommodate both local growth and international needs. The end of the pipes and marine cable remain approximately three feet below the ocean floor to be protected from anchors and fishing activity.

Not just a good experience for the city, residents, and RTI, Parrish's team also enjoyed the project. Much of the positivity was thanks to the success of the Vermeer drill and partnership with RDO Vermeer.

While RDO Vermeer offers full support of maintenance and service, Hugen is quick to point out that ARB and Primoris are very self-sustaining when it comes to their equipment management.

“They have a very accomplished shop so most of the maintenance was taken care of by their team,” said Hugen.

There was one crucial weekend service call where the crane was experiencing a problem on site. Rather than wait for parts — or Monday morning to arrive — one of RDO Vermeer's technicians disassembled the crane on his service truck, got the parts needed, fixed the issue over the weekend and ensured ARB was back up and running when the workweek began.

Parrish recalls the support and onsite service provided, “It was very good working with RDO and their technicians, they got the job done.”