Little Island’s supporting structure is made up of concrete piles rising up from the Hudson River, emerging from in between the leftover wood piles of Pier 54 and Pier 56, which were largely preserved to maintain habitats for aquatic life. (Little Island photo)

New York Harbor, where the mighty Hudson River empties into the Atlantic, is one of the largest natural harbors in the world. It is at the same time a highly engineered environment.

Drawing on both these facets — the natural and the man-made — is Little Island, where a former industrial jetty is being transformed into a futuristic and idyllic public parkland, at a cost of $250 million.

Little Island rests aloft the remains of Pier 55 on Manhattan's West Side on hundreds of stepped bulbous concrete piles. When the park opens in spring 2021, the hilly landscaped refuge will offer visitors walking trails, a public plaza and a pair of performance stages, among other recreational spaces.

Little Island's supporting structure is made up of concrete piles rising up from the Hudson River, emerging from in between the leftover wood piles of Pier 54 and Pier 56, which were largely preserved to maintain habitats for aquatic life. (Little Island photo)

Delineating these uses will be a smorgasbord of native flora, ranging from dozens of tree and shrub species to hundreds of types of grasses and perennials, all nestled atop giant concrete "tulip pots."

The London-based design firm Heatherwick Studio was awarded the Little Island project in 2013 following a design competition. While the idea of a levitating park was whimsical, the architects showed real concern about disturbing marine life habitats, for which Pier 55 functioned as scaffolding.

Working with the New York firm Standard Architects, Heatherwick Studio determined to leave the decayed wooden piles in place, lofting the undulating park over them. The varying heights of the new concrete piles — the tallest reaches 62 ft. above the Hudson — should allow sunlight to reach those very habitats.

"What consumed the most time and effort — and [was] perhaps the most anxiety-producing — was ensuring that the design conformed to the shifting profile of the piles and the swoop of the concrete pots," Nielsen explained.

But any landscape features and the requisite infrastructural supports would place a significant load on the concrete structural system. Anticipating this challenge, Heatherwick Studio and MNLA consulted with collaborator Arup, a global structural engineering firm, which used 3D parametric scripts and digital models to calculate whether too much weight was being put on any one cluster of columns.

For instance, the process helped guide MNLA to select and situate the plantings, which skew toward evergreens to avoid wind loads associated with dense canopies of foliage.

Although they appear to be of one piece, the constituent piles and pots were fabricated by different hands in different places. Washington, D.C.-based engineering firm Mueser Rutledge designed the 267 piles from its New York office, then sent the digital files over to Coastal Precast System's Chesapeake, Va., factory for production.

Upon fabrication, the piles were delivered by barge to Pier 55 and slowly driven into the bedrock over the better part of a year (gaps were left in the installation period, though, to accommodate seasonal fish migration).

As for the tulip pots, which comprise several distinct concrete "petals," they were fabricated by The Fort Miller Company and two of its subsidiary companies in upstate New York. Hundreds of unique molds were needed to form the pot modules and scores of steel plates to secure them together in groups of four. All the parts were then transported to the Port of Coeymans, just south of Albany, for assembly by Cranford, N.J., marine contractor Weeks Marine Inc. and then placed in barges for shipment down the Hudson River. 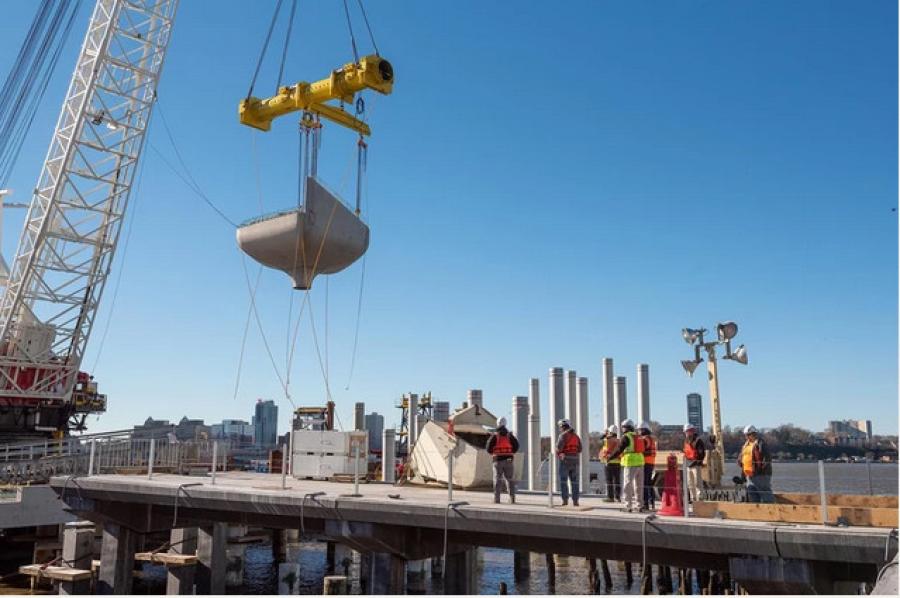 The installation of each pot took a few hours, with a total of 132 pots installed on the site. Each pot weighs up to 75 tons and no two pots are exactly the same. (Little Island photo)

After the superstructure came together on-site, MNLA moved ahead with plotting the landscaping elements as all the plant life required extensive drainage and soil bedding. MNLA devised a complex system that accounted for the extreme grade changes; rising sequentially from the concrete slab is a ¾-in. drainage mat, followed by an 18-in. layer of gravel, anywhere between 12 in. and 2 ft. of geofoam, and, even more dramatically, 18 in. to 6 ft. of soil.

Downspouts located at the junction of four-pot intervals prevent the park from becoming a pool.

"The evergreens are concentrated on the north and northeast slopes to screen the West Side Highway and nearby Pier 57," explained Nielsen. "Little Island is angled off the waterfront to both frame views of the Manhattan skyline and the Statue of Liberty and capture greater solar exposure."

MNLA sourced trees from three separate nurseries for Little Island, which were tagged in the fall and winter of 2019 and planted this past spring and summer. According to Nielsen, each tree was weighed upon delivery to the site — the largest has a 12-ft. root diameter and weighs 20,000 lbs. — and based on their weight was assigned the proper cranes for lifting and insertion.

The Hudson River is prone to severe winds, especially in winter, and the design and engineering teams countered the risk of uprooted trees by tying the root structures to a mesh of steel cables predrilled into the concrete slab.

"This is by far the best collaborative experience I have had in my career," said Nielsen. "Every decision derived from continual dialogue and designed to account for rising sea levels. I am totally confident it will stay out of harm's way."