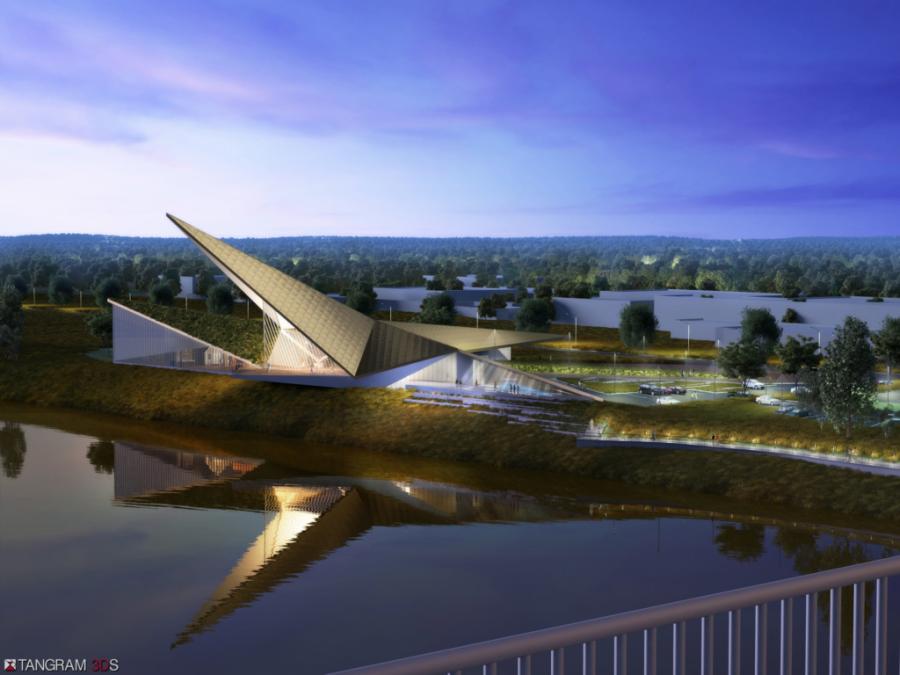 To coincide with the 230th anniversary of the U.S. Marshals Service, the United States Marshals Museum's opening date is set for September 24, 2019. Designed by Cambridge Seven Associates along with Polk Stanley Wilcox Architects, the institution's foundation has also launched a $60 million fundraising campaign for construction.

The new 50,000-square-foot museum will be located in Fort Smith, Arkansas, and will feature a collection of artifacts spread across three galleries exploring the 230-year history of the nation's oldest law enforcement agency, a Hall of Honor for those killed in the line of duty, and a National Learning Center that will promote an understanding of constitutional democracy.

Peter Kuttner, president of Cambridge Seven Associates and principal architect for the museum, consciously blended history with modern sustainability in the design. The museum looks out over the Arkansas River, which used to serve as a border between the former colonies and what was known as the frontier at the time of the Marshals' establishment in 1789. The scheme also incorporates photovoltaic panels and vegetative roofing along the building's star-shaped design, which,along with its use of bronze, is reflective of the badges worn by marshals in earlier years.

From his research, Kuttner found that “there was no official badge manufacturer in Washington,” that “some were stamped on tin, some were cast, some [stars] had five points, some had six points,” and “when you buy souvenirs, they're all different sizes and looks.”

For his inspiration for the star-shaped aesthetic, Kuttner looked to one of the last scenes in the movie High Noon, in which U.S. Marshal Will Kane tosses his badge to the ground. “It hits at an angle, with some of the points jutting out of the ground,” he said, explaining his approach to the museum as “low on the front, and high on the back.” The infamous High Noon drawing by former President Bill Clinton, who serves as honorary chair of the museum's executive committee, still hangs in the Clinton Presidential Center in Little Rock, Arkansas, and served as “a great little connection” that got the committee on board, Kuttner said.

The facility is projected to cost $35.9 million, with $12.3 million in total exhibits, a $4 million endowment, nearly $3 million in contingencies, and $3.5 million for one-year operating expenses. Just over $29 million is listed in committed fundraising so far.

With almost half of the campaign target already secured, the museum still faces fundraising challenges. In a conversation with Talk Business & Politics, Jim Dunn, president of the U.S. Marshals Museum Foundation, cited the agency's low profile, as well as the location of its future home in Fort Smith as specific points of tension. “Convincing donors to export large chunks of money to a distant and unknown community is difficult,” he said.

At present, the museum's eight-member staff is working out of offices in Fort Smith, maintaining some 500 items that will eventually be used in the museum's exhibitions.

The museum staff is set to expand to 18–20 people upon opening.

With regard to the museum's funding and the array of design elements, specifically the sustainable features, Kuttner expressed anxiety about its execution: “I'm crossing my fingers that those elements survive value-engineering,” he said.