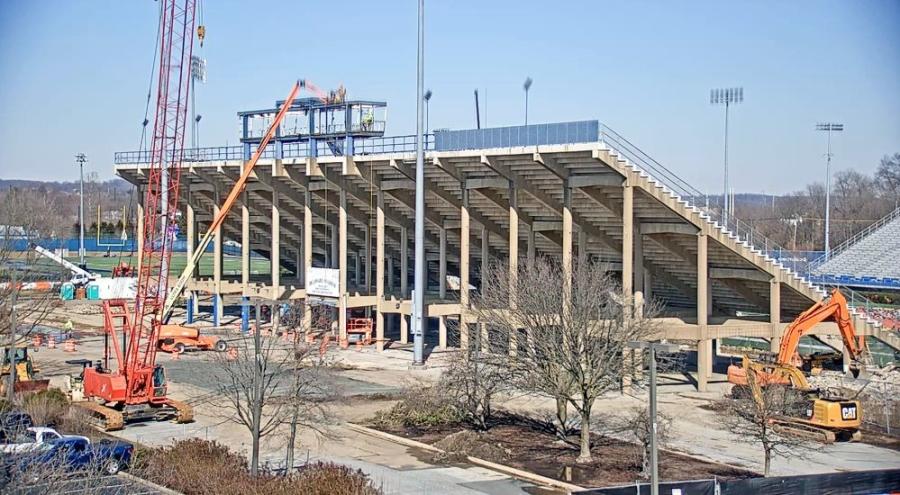 "Our greatest focus in the department of athletics is to provide an experience for our student-athletes that prepares them for success in their future," said UD spokesman Scott Day. "Our motto of ‘inspiring greatness together' is embodied in this project, because it provides a home for all of our 600-plus student-athletes to be under one roof, bettering themselves, whether it be physically, mentally or academically. 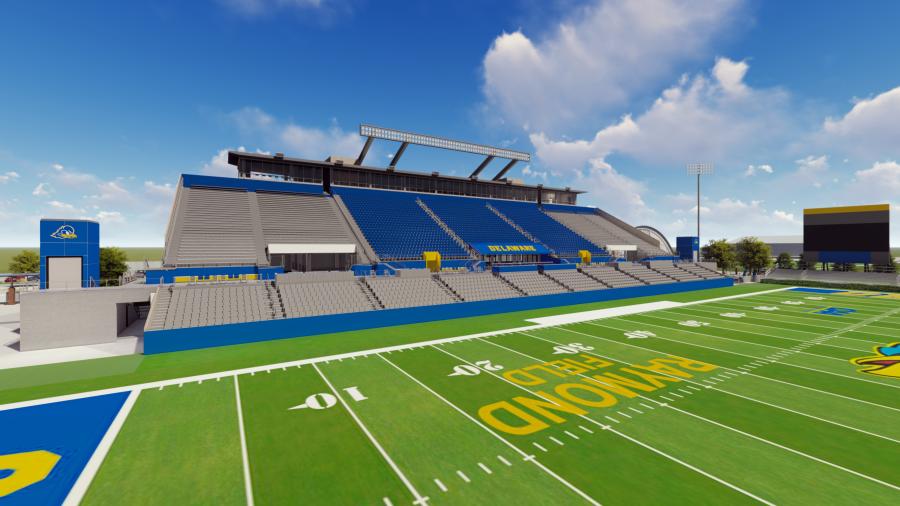 "We are in the middle of a much bigger campaign for the university as a whole, which this project is a part of. The momentum and excitement around campus has never been so high. It's a great chance to be a part of something special."

Day said the project has been in the making for quite some time.

"The discussion for a building of this magnitude started probably five-six years ago, but really became a reality in the past few years when we had several major donors, led by Ken and Liz Whitney, who made the project a reality.

"We had a groundbreaking ceremony in December, with about 300 to 400 people in attendance, including campus partners, supporters, student-athletes, staff and many folks who bleed blue and gold. It was a game-changing moment for Delaware athletics."

"The first moment it became a reality was when we saw the construction equipment roll into our parking lots. Construction is a daily reminder of the progress that we are making toward achieving our goal. The journey may hit delays, it may hit bumps in the road, but if we trust the process and understand the end goal, it's an extremely exciting process to be a part of on a daily basis."

Reaction from those who will use the new facilities has been extremely positive. 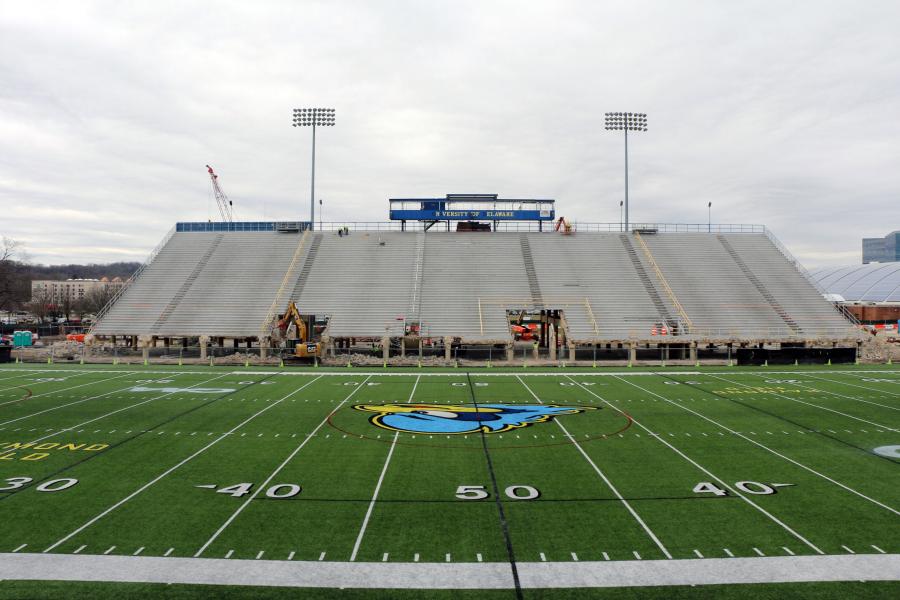 "We have more than 600 student-athletes who all compete and take pride in wearing the Delaware jersey. This project gives them all one home to go to and find support in each other.

"Right now, our student-athletes are housed in several different buildings, but this allows them to interact and support each other on a totally different level. This provides them resources and top-of-the-line tools to build a successful future in whatever they choose."

As for how the work is affecting day-to-day operations, said Day, "There's always changes that have to be made when construction is going on, but we know the end goal. We know that the process to get to that goal may get delayed or have unforeseen circumstances, but we also realize how special this new building and the renovation is going to be. We know how much of a game-changer this is for Delaware athletics.

"Our parking lot lost some spaces, and there's some extra steps and longer routes to walk around to get to places, but overall, we're excited about how things are moving forward."

Renovation of Delaware Stadium began at the end of the 2018 football season. The ongoing construction is the first of several phases planned.

According to the university's official website, the Whitney Athletic Center is named for UD alum and Board of Trustees member Kenneth C. Whitney, and his wife, Elizabeth K. Whitney, in recognition of their gift of $10 million. 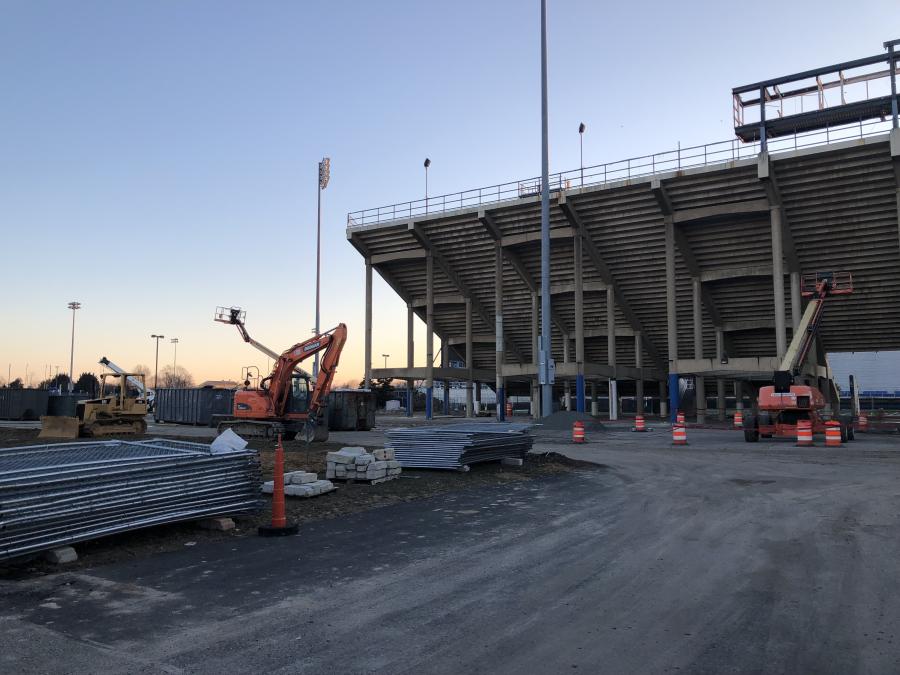 "The Whitney Athletics Center will play an essential role in helping ensure the success of our student-athletes, both in competition and in the classroom," said UD President Dennis Assanis. "Ken and Liz Whitney have demonstrated their deep commitment to our students through their generous gift, and we appreciate everyone who has followed their lead in supporting this project."

The Whitneys said a strong athletics program is integral to the unique student experience offered by UD.

"We are proud to support the Blue Hens of today and tomorrow through the building of a new athletic center," Ken said. "We are excited in knowing the multiple ways this facility will enhance the student-athlete experience at the University for years to come, as we strongly believe in the positive impact athletics can have across an entire university community and beyond."

Chrissi Rawak, director of Athletics and Recreation Services stated, "We are grateful for the commitment shown by our donors to this project. As we work every day to be a national model for student success, seeking comprehensive excellence in all we do, this facility will serve as the lifeblood for those efforts, positively impacting our student-athletes and fans for years to come."

As part of Phase I work, crews are renovating the west side of the stadium. This includes installing chair backs for all seats in the middle three sections, upgrading restrooms and concessions and providing a Stadium Club space with bar, food and exclusive club seating. The plans also call for an enhanced press box, including game day production spaces and coaches' booths. 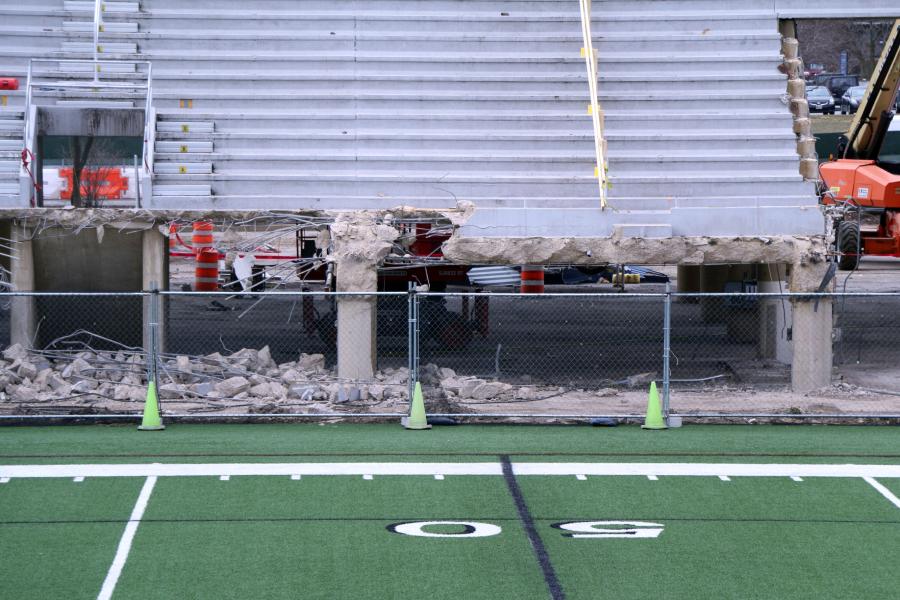 Construction of the new athletic center for all UD student-athletes will extend along the stadium's western facade to include the Student Success Center, integrated space for academic support, career preparation and leadership development and tutoring, mentoring, academic advising and study areas. Also included will be an academic lounge, multipurpose rooms for guest lectures and press conferences, a health & well-being space, a 10,000-sq.-ft. strength and conditioning space, an enhanced athletic training area, team workshops and athlete educational sessions, and hydrotherapy tubs for rejuvenation and therapeutic needs.

According to Joe Shirley, a UD senior associate athletic director, "Our biggest challenge is that the stadium we're doing the construction on right now is still open, and will continue to be open while the project is ongoing. We have lacrosse games, commencement, football season and many other daily events going on. We have to balance those events with the construction noise, dust and debris that come along with a project of this magnitude."

Work on stadium seating is currently taking place. Construction should be completed this summer. The new building will be finished in August of next year.

"We are currently in the demolition phase of construction, taking a lot of the stands that will be replaced for the upcoming football season in 2019," said Shirley. 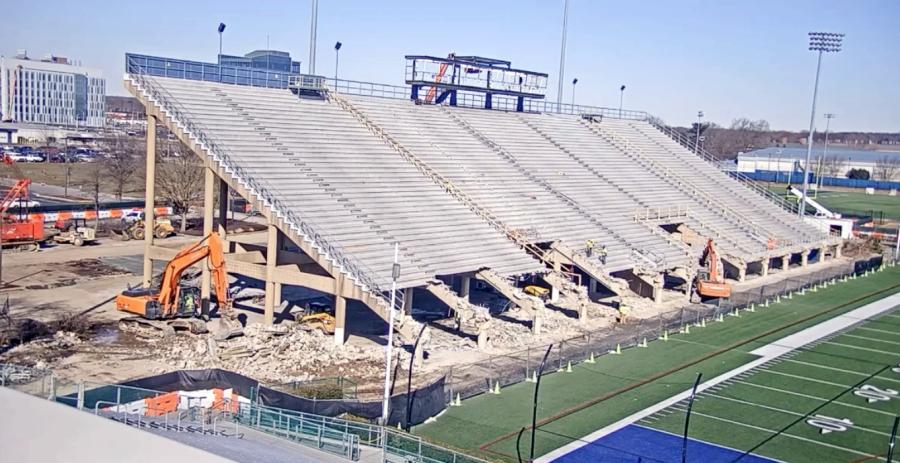 "We are keeping the structure and installing new planks that are wider for more leg room and comfort for our fans, said Shirley, adding, "We have to move a lot of the underground infrastructure of the stadium and all the workings that go into the stadium. That's the biggest task yet to be done."

The stadium was built in the 1950s, but a lot of the foundation was inspected, and fortunately, crews are able to use a lot of the same structure in building the new stands.

In addition to providing west side seating and amenities on the concourse, workers must complete new plazas to welcome fans and create gathering spaces for the visitors and students. Shirley said planning the project to have the seating ready for the next football season and hosting events during construction have been the most time-consuming chores. Luckily, the elements have not been a problem, so far.

"Weather has not been a factor. If anything, the winds of Delaware cause the most issues."

Typical construction equipment is being used on the project. Main materials utilized include steel, brick and glass.

Following the completion of fundraising for Phase I, focus will shift to future phases of Build Our Home, which will include the Delaware Field House and seating on the east side and in the endzones of Delaware Stadium.