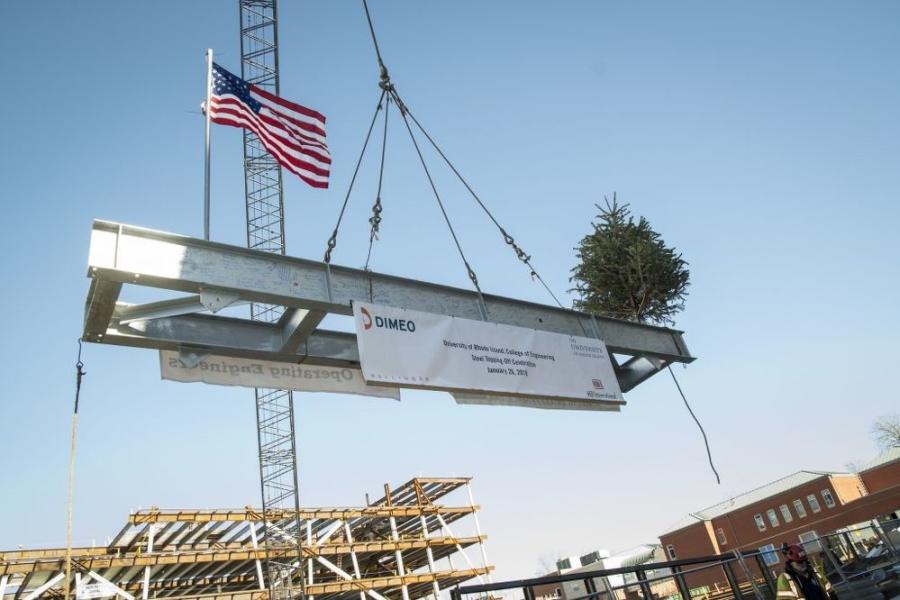 The beam is lifted during the topping out ceremony on Jan. 26 at the new College of Engineering building. (Nora Lewis photo)

University of Rhode Island officials and contractors celebrated the installation of the final piece of structural steel at the University's new $150 million College of Engineering complex today during a topping out celebration.

Such events are traditional milestones celebrated by workers in the trades, contractors and institutional leaders.

Work on the largest project in URI history began in February 2017, and a ceremonial groundbreaking was held in April. The project is progressing on schedule, with classes expected to start at the new facility in September 2019.

“As we look up at what has been accomplished in about a year at this site, we at URI, and indeed all Rhode Islanders, have every reason to be optimistic about the future,” said David M. Dooley, URI president. “We celebrate with the hundreds of skilled trade workers who have been working during the past couple of weeks in sometimes brutal cold to make this project a reality. Already, we can imagine what a magnificent facility this is going to be for our students, faculty and staff, and how it will play a key role in the state's economic development.”

At the peak of the steelwork, 100 workers were on the site. With this part of the project being completed, 2,137 tons of structural steel now dominate the skyline near Bliss Hall, the historic home of URI engineering.

The next major steps in the project are:

Prior to construction, five older engineering buildings — Crawford Hall, Gilbreth Hall, Kelly Hall, Kelly Hall Annex and Wales Hall, all of which opened in the late 1950s and early 1960s, were razed to make way for the new structure.

The facility's foundation and relocation of the underground utilities — steam, power and telecommunications lines — are completed. About 30,000 cu. yds. of earth were removed and stockpiled at East Farm and about 10,000 cu. yds. were brought back to fill around the foundations.

Funded by a $125 million bond issue approved overwhelmingly by Rhode Island voters in 2014 and strongly supported by Rhode Island's business and labor leaders, the first phase now under way will result in a 190,000-sq.-ft. facility designed to foster interdisciplinary collaboration and innovation and meet the technology-driven changes in all segments of engineering. In fall 2016, Rhode Island voters approved an additional $25.5 million for the second phase of the project to upgrade and expand Bliss Hall, the historic home of URI Engineering on the Kingston Quadrangle since 1928.

“I sense the excitement building among our students, faculty, staff and alumni as the building takes shape,” said Raymond Wright, dean of the College of Engineering. “This project means more and better teaching and learning spaces and more opportunities for Rhode Island businesses to work with our students and faculty in a facility that will house the best technology and equipment. Thanks to this engineering complex, our students will graduate from URI as innovators and leaders, ready to move Rhode Island into a new era of prosperity.”

The new facility will include research and classroom space for chemical, electrical, computer, biomedical, mechanical, industrial and systems, and civil and environmental engineering, as well as general University classrooms. A unique structural system will be used for the central portion of the structure. A four-story “Bridge” will consist of three, 270-ft. trusses that span 158 ft. The trusses are 40 ft. apart. The Bridge will house teaching labs, departmental offices, research labs and graduate student areas.

The construction manager is Dimeo Construction Co., and the architect and engineer is Ballinger. Serving as the owner's representative on the project is Hill International.

Dimeo was named the project's construction manager in April 2016.

“Today is truly a day of celebration as it is a critical milestone for the project. The superstructure defines the shape of the building and the steel topping out signifies the safe completion of the framing of the structure, and a wish for continued good luck for the future of the building project including its eventual occupants,” stated Doug Peckham, vice president of Dimeo Construction Co. “There is still a complex path to be traversed over the next 18 months, and the commitment, collaboration and will to succeed by the teams led by URI, Ballinger, Hill International, Dimeo and the various subcontractors will be the key ingredient to maintain the high level of success achieved to this juncture of the project.”