URI Engineering Complex to Be a Commanding Presence 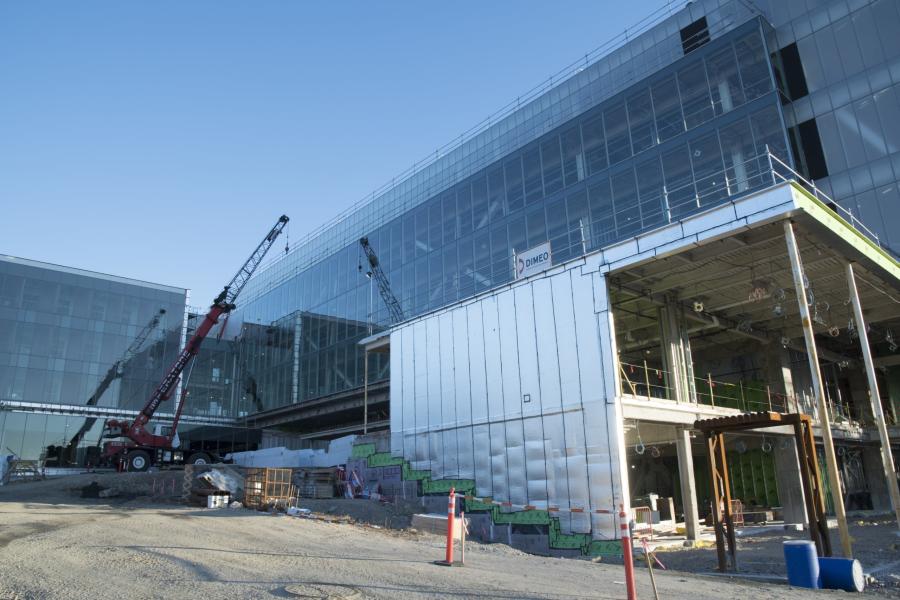 Completion of the University of Rhode Island's new College of Engineering building is several months away, but its unique and commanding presence near the northeast corner of the Kingston Campus quadrangle has led to this characterization: It will be one of the most provocative and technologically advanced engineering buildings in the country.

The largest project in University history, work began on the $150 million engineering complex in February 2017, and it is expected to be ready for classes in fall 2019. Voters approved two bonds for the project, a $125 million bond for the new facility and a $25 million bond to refurbish and expand Bliss Hall. The home of URI Engineering since 1928, Bliss Hall will get a 15,000 sq.-ft. addition and is scheduled to reopen in January 2020. 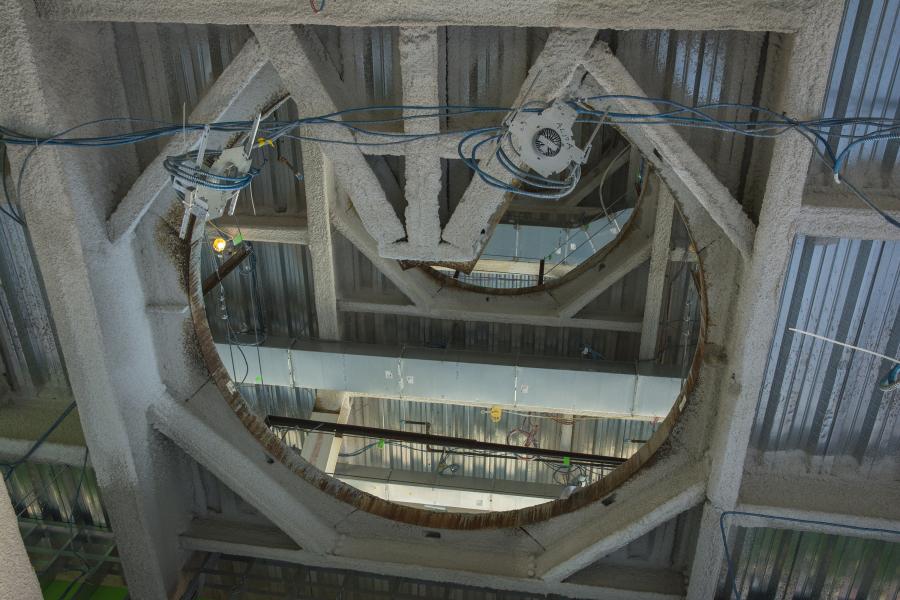 This 12-ft.-diameter opening, seen from a lower floor of URI's new engineering, will eventually be the location of a spiral staircase. (URI photo by Nora Lewis photo)

At 186,000 sq. ft. and 100 ft. tall, the new engineering building replaces the 98,000 sq. ft. found in the five outdated engineering structures that were razed to make way for the new facility. The new facility is state of the art, in terms of architectural design and engineering. The bold design uses three trusses, similar to those used in bridges, which span more than 150 ft. of open space inside. There is significant use of glass on the exterior and on interior walls of the building, which allows the building to feel open and collaborative.

The new building is allowing the URI Engineering program to increase enrollment.

"Current and prospective students are excited about what is going on here," Dean Raymond Wright said. "In 2007, our enrollment was under 1,000, but it is now 1,550. We expect that our enrollment will grow as this building becomes operational."

On the ground-level floor, there will be two, 72-seat active classrooms and a 60-seat active learning classroom. Each of those spaces will contain circular tables and technology that will allow students and faculty members to collaborate.

"Engineering is a collaborative discipline. The new complex, with its wide-open spaces, glass walls, and hands-on learning, is designed around the notion that this collaboration leads to success," said Wright.

The quad-level floor will look out to the new engineering quadrangle. The quad will feature an exterior patio with seating areas. Inside there will be a café made of modern composite materials. The cafe will accommodate approximately 110 people.

A glass-walled space will allow observers to see into senior capstone project space for seven engineering programs. The first floor also will house the college's dedicated student shop. It will also be home to two computer labs and two electronic student centers. 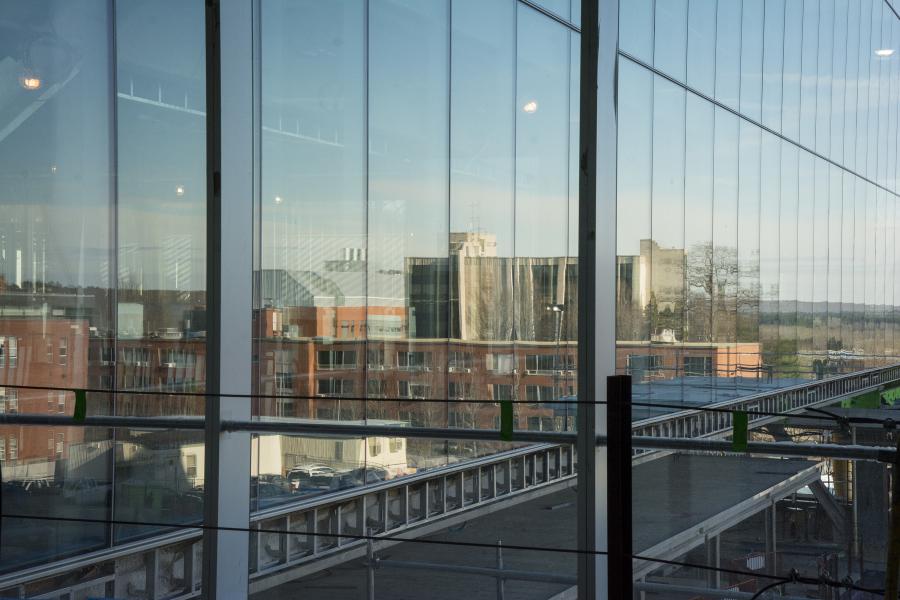 Buildings on URI's Kingston Campus are reflected in the glass walls of the new engineering complex. (URI photo by Nora Lewis photo)

Ninety individual faculty offices will be located on three floors, as well six, 12-seat conference rooms and six faculty lounges. Three floors of the bridge will house research labs, and the fourth floor will house labs for the college's smart cities disciplines and robotics programs.

At Bliss Hall, the entire building has been gutted and all of the windows are being replaced with historically appropriate modern windows. New plumbing, mechanical, fire prevention and electrical infrastructure also are part of the upgrade. The expanded facility will house student organization space, student work rooms and several general assignment classrooms. The second and third floors will house the department of electrical and computer engineering. The ground floor will be some department of civil engineering labs.

The Bliss Hall part of the project received about $378,000 in support from the Governor's Commissions on Disability to upgrade building access, including new doorways and a new elevator, with another grant proposal pending for fiscal year 2019.

"This is a particularly generous grant from the Governor's Commission," said Paul DePace, director of capital projects at URI. "This support enables us to turn one of URI's historic granite buildings into a welcoming and accessible facility for students, faculty, staff, alumni and visitors."

"During the last several months, people have seen the size and scope of this building, and they are amazed," Wright said. "They recognize that there are astonishing things going on in the building now, and that they will continue once we open the doors. There is a sense of awe as people see the change taking place."

The project has enjoyed major support from industry and private donors. Even before a single spade of earth was turned or a single excavator showed up at the site, the project attracted $7 million in private gift pledges. Among the top pledges are: Toray Plastics (America), $2 million: FM Global, $1 million; Taco Inc., $400,000; and an anonymous gift of $2.5 million from a URI alumnus and corporate leader. The College has set a $20 million private fundraising goal to invest in additional equipment and faculty recruitment.

The construction manager is Dimeo Construction Co., of Providence, and the architect is Ballinger of Philadelphia.

"The new building will be one of the most provocative and technologically advanced engineering buildings in the country," said Terry Steelman, design principal with Ballinger and architect. "The building is intended to enhance the identity and visibility of the engineering disciplines while creating a vibrant hub of interaction and innovation for the entire URI community. This exciting new facility will be an important catalyst for attracting the best faculty, students and industry partners as the College of Engineering grows in national stature."

Click here to view interactive panoramas of the new building.