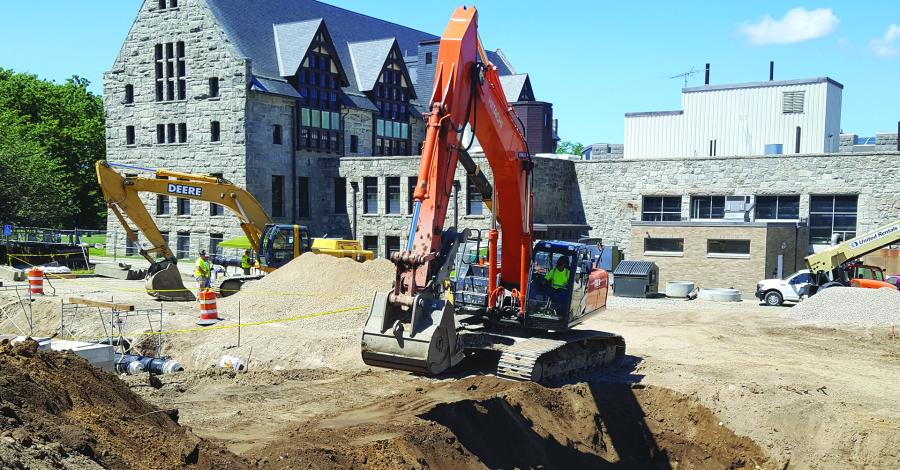 When the University of Rhode Island committed to building a new engineering complex, two decisions were obvious. One, five historical buildings, all built in the late 1950s and early 1960s would have to go; and two, the new building needed to be a cutting-edge structure that spoke clearly of its purpose.

“This was about making a very bold statement that this is an engineering building,” said Dean Raymond Wright. “There are 2,300 tons of structural steel, and 3,700 square feet of glass in the interior alone. There is a lot of glass on the exterior, which is a very unique feature on this campus. One of the features in the cafeteria is a unique composite material.”

Groundbreaking on the $125 million, 190,000-sq. ft. complex took place in April. Crews have since finished excavating for the foundation, installed the steel piles that support the foundations and have begun formwork and pouring concrete, said Doug Peckham, vice-president of Dimeo Construction Company, headquartered in Providence, R.I.

The exterior of the building, designed by Ballinger architects, utilizes an aluminum unitized curtain wall and features fin projections along with a combination of etched glass wall systems including a large skylight at the roof.

“The building is very transparent as you are looking in from the exterior which reveals the exposed structural steel skeleton,” Peckham said. “The unitized curtain wall system is a type of system in which it is mostly erected from the interior of the building and reduces the labor intensity of field erection. The system is prefabricated in large sections and segmented together in the field, in lieu of a conventional curtain wall system which is 'stick-built' in the field. You can still get the same look with other systems, but the designer's approach has made the exterior a very transparent view from exterior into interior. In total, there is [more than] 77,000 square feet of glass wall systems on the exterior envelope.

“The structural steel is another signature feature of the building, which again leads into the glass which will allow the public to view this very unique steel shape that supports the building. The main component of the steel is the bridge, which is composed of three long span parallel trusses that traverse in the east-west direction or long-axis of the building and are a series of vertical, horizontal and skewed angular steel shapes connected together. The bridge starts at the main floor level and continues vertically to the roof allowing for a long clear span on the lower level with no visible support.”

“The complexity of the steel fabrication due to the geometry of the structure, the steel erection tolerances, as well as the significant amount of welding required on the bridge trusses will be challenging for the project schedule. In addition, the majority of the steel installation will be occurring during the cold months this winter. The challenge will be to complete the installation of the steel and efficiently put in weather protection measures and temporary heating, so we can pour concrete on each level through the winter. That's the immediate challenge in front of us.”

Equipment on site includes backhoes, front-end loaders, bulldozers, large dump trucks, large excavators, various size cranes and pile driving/drilling equipment. During the concrete foundations installation, most of the concrete pours utilized a concrete pump truck to convey concrete from mixing truck to within the formwork. A large drill rig for drilling the hydraulic elevator piston casing will mobilize to the site parallel to concrete installations. In addition, pumps and dewatering frac tanks have been employed to control the height of the existing water table during concrete foundation installations. Once the foundations are complete, two cranes will mobilize the site in mid-October to support the structural steel erection sequence which will be sized at 300 tons [crawler] and 170 tons [hydraulic] each.

Another unique tool being utilized on the project is a drone.

“We've used a drone to fly over the site at certain intervals to do some contour mapping of the topography of the existing site. This will enable us to see what the grades were at a certain date when they were handed off to another contractor.” Peckham said. “In addition, we can utilize the footage from the drone to identify existing features and conditions that existed on a certain date, and compare the footage several months or years later, if there's been damage, we have a good benchmark for all existing conditions. To that point, we've also utilized vibration monitoring for preparation of pile driving to monitor any movement or cracking within the existing buildings that are in immediate proximity to the pile driving or heavy equipment operation within the site.”

They've also utilized building information modeling, or BIM, for mechanical, electrical, plumbing and fire protection systems design analysis. They'll continue utilizing the modeling throughout the project for the coordination of all of the piping, duct work and electrical systems conduit/lighting through the buildings, as well as to develop certain exterior building facade mock-up documents, Peckham said.

“It's definitely going to be a signature building that consolidates most of the engineering programs into one building. The campus over the last 15 years plus has transformed quite a bit, especially on that side with the recent buildings they have been constructed which are a little more cutting edge versus the original older style buildings. It's definitely a different look.”

The consolidation allows students and faculty who were once grouped by program to now be grouped by interest, making problem solving that much easier, Wright said.

The steel work is scheduled to begin in October, with exterior glass on the building envelope set to begin in March 2018. The building is projected for a completion in the summer of 2019.