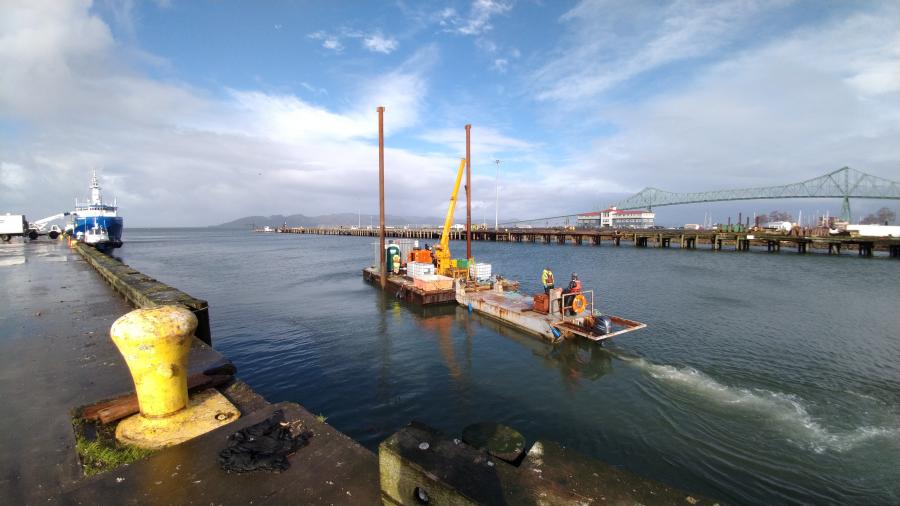 Oregon State Bridge Construction Inc. (OSBC) began the repairs in March 2019 and expects to complete its work in November 2021.

The New Youngs Bay Bridge along U.S. 101 linking the cities of Astoria and Warrenton in northwestern Oregon, a crucial link for commuter and commercial traffic, is undergoing a major rehabilitation via a $12.4 million investment to extend its lifespan.

Oregon State Bridge Construction Inc. (OSBC) began the repairs in March 2019 and expects to complete its work in November 2021. The project is being funded by the Oregon Department of Transportation Bridge Program.

Craig Gries, OSBC's President, has overseen many bridge projects and is well aware of the challenges. 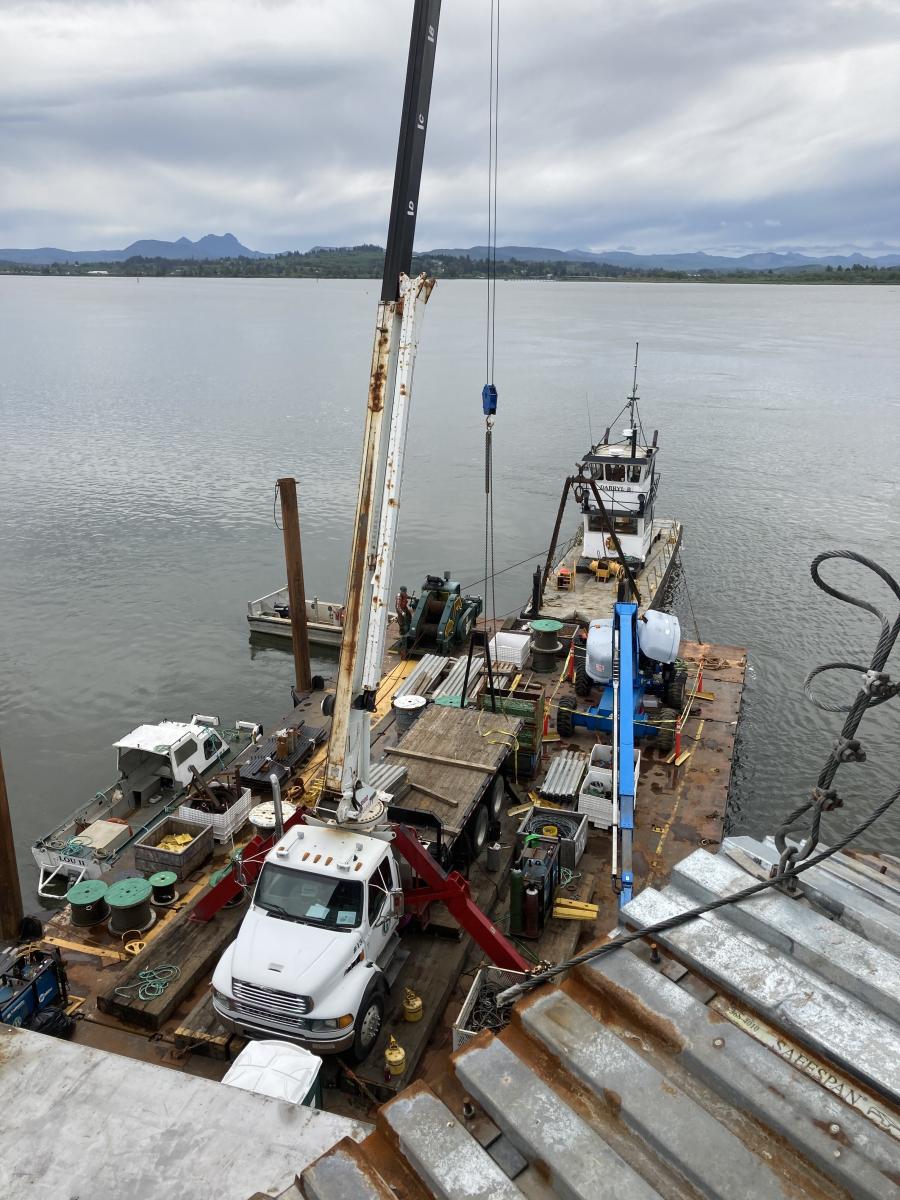 "The biggest challenge is just the location and geometry of the bridge," he said. "The length and it being completely over water, access to the work is everything. One of OSBC and ODOT's main goals is to minimize the traffic impacts. This means the usual way of getting the work, the road itself, is not accessible and this requires more inventive ways to get to the work. One way is ferrying the crews out by boat. This method works sometimes, but presents its own challenges.

"Another issue is weather," he added. "Astoria and the bridge itself are exposed to a very windy and rainy environment. This can make travel by boat too treacherous at times. This might mean the crews have to walk a little farther than normal. We have also purchased a small bus to take the crew out to the only parking spot on the bridge. This works well, but is also another task where social distancing cannot be achieved and requires special PPE due to COVID-19."

OSBC has minimized the amount of night work on this project by building access safe span scaffolding under the bridge that allows a majority of the work to be done during the day.

"One task, epoxy injecting cracks in the concrete, requires traffic to be moved into a single lane to decrease vibrations," said Scott Plummer, OSBC's project manager. "We utilize large generators on the barge to power lighting on the safe span to illuminate the work areas. At the beginning it was discovered there was an electrical line buried in the bay that powers the drawbridge span, running alongside the entire length. OSBC and ODOT worked together to hire divers and locate the utility. Marker buoys were installed to make sure we didn't have any conflicts during barge spudding operations.

"On any project of this size and timeframe there are going to be issues, especially on repair/rehabilitation work," he added. "We have found that just because the original plans show something, doesn't mean that is exactly how they built it back in the 1960s. We and ODOT have worked to resolve these issues at the lowest level, but sometimes the original design team needs to come back in to provide direction. Resolving issues has definitely been an entire team effort."

A fair amount of specialized equipment is being used, including various cranes placed on barges.

"Two pieces of equipment are most vital to the work," said Gries. "The first is the barges — probably the most important. It is not only what we use to install the access platform, but storage for materials and as a place to sit for the second most important piece of equipment, the NLB 225 ultra-high-pressure water blaster which is critical to removing the old concrete that requires repair. Barges and boats are usually out at the bridge, but OSBC rents space from the Port of Astoria for sheltering the barge during storm events." 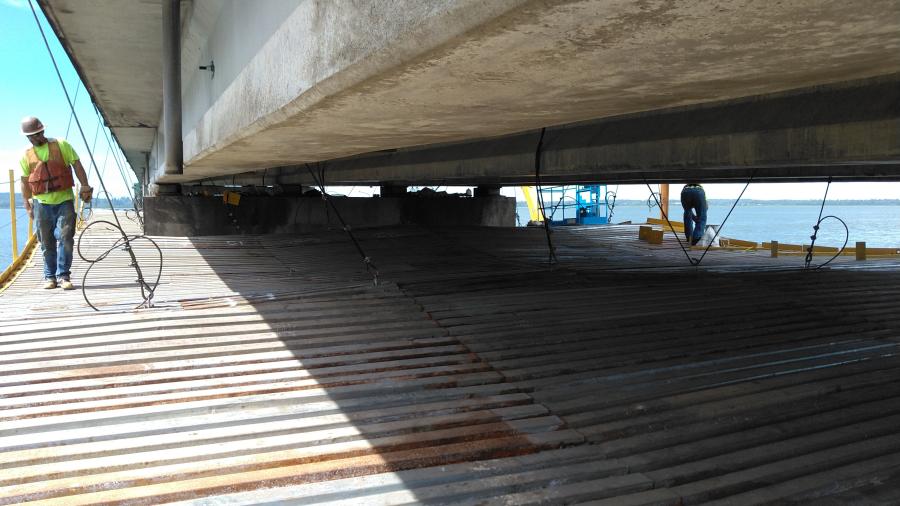 The work is far from easy and raising the lift span tower bracing above the high route clearance will require the removal and reinstallation of multiple cross braces at a higher elevation.

"This will be done during 14 consecutive full nighttime closures," said Gries. "We have closures, but they are not around the clock and the roadway needs to be re-opened each morning. This requires the work to be sequenced in a very specific order and we cannot remove more than we replace in one night time shift."

The replacement of the rocker bearings is ongoing.

"This requires temporarily jacking the bridge to remove old steel rocker bearings and replacing them with new steel and reinforced elastomeric bearing assemblies," said Plummer. "The work takes place at 14 of the 52 bridge piers and each location has four bearings. The challenge is the jacking of the bridge itself. This is required to remove the dead load from the bearings before they can be removed and replaced. The catch is that traffic is still cruising by up on the roadway. We need to lift it enough to do the work, but not so much that the travelling public can feel it."

The concrete repair is the core of the project and takes the most time, being the key to extending the bridge's lifespan.

"One of the challenges is actually finding where the work is to be done," said Gries. "Delaminated or damaged concrete can be found by ‘sounding' techniques, which is basically taking a small hammer and tapping the concrete and listening for that ‘hollow' sound. Usually not too hard, but on a bridge that is almost a mile long, that means there is 275,000 square feet of surface area where every square inch needs to be tapped by a hammer."

OSBC relies on great teamwork to get the job done.

"A project of this scope requires an entire team effort," said Gries. "From ODOT's management and design team, to our construction team down to the subcontractors and most importantly each individual crew member, everyone has to have the same goals of extending the life of this bridge and doing it on-time and on budget. The efforts of the crews have been outstanding. This is a tough job. When you are starting at Bent 1 with 52 to go and literally cannot see the end of the bridge, it is hard to see any light at the end of the tunnel. They have made really good progress so far and while it is still small, we are starting to see the light."

Materials expected to be removed include 150 tons of concrete and 56 rocker bearings that will be recycled on other projects. New materials being brought are 150 tons of repair mortar, 5 tons of steel and 1,200 gallons of silane sealer to coat the concrete. 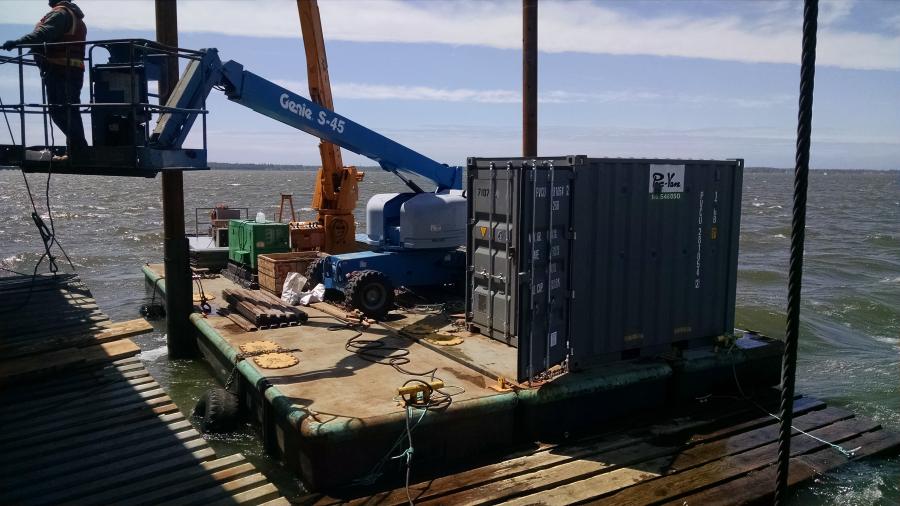 "The main wear and tear issues that come up are with the high pressure water blasting system," said Gries. "Sending water out a tiny nozzle at 40,000 psi means we work our way through parts fairly quickly. NLB has been great at getting us the parts in a timely fashion, and the crews have gotten good at ordering what we will need in advance."

Mechanics are sent as needed.

"Astoria and the project site is the definitely a marine environment — salt water, rain and wind storms can cause equipment to breakdown," said Gries. "The keys are preventative maintenance and to make sure to clean equipment and tools on a regular basis."

"NLB and ERS have been great," said Gries. "If the hydro blaster breaks down, the entire job is shut down. NLB has been very responsive with wear parts and helping us to keep the job moving. On a project like this things always come up. It is nice having a local place like ERS that is only 15 minutes away to get us what we need. Whether it is another manlift or just and extra light and heat on a cold night, it is good to know that you can get what you need on short notice."

"With more than 20,000 vehicles a day on average using it, the bridge connects Astoria with the other communities on U.S. 101 and is an important life line in Clatsop County," said Lou Torres, an ODOT public information officer, Region 2 (Willamette Valley and Northwest Oregon). "This is an extensive bridge repair project. Making the necessary repairs enables the bridge to continue as a critical part of the North Coast transportation network."

From one causeway to the other, the two-lane bridge is just under 1 mi. long and has 52 spans. It was built in 1963 and has been impacted by growing traffic volumes, including larger and heavier trucks; deterioration caused by direct exposure to the elements; and rapid changes in temperature.

"A bridge rehabilitation project like this one takes several years of planning," said Torres. "It takes some time to determine the extent of the necessary work. The investment that we are currently making will extend the life of the bridge for many years. We do not have the funds to replace a bridge of this size, so this is critical infrastructure work for the North Coast."

"ODOT bridge engineers designed the project with the idea that it would extend the life of the bridge for many decades," said Torres, "and to also minimize traffic delays during construction. The bridge and U.S. 101 are an important connection between Astoria and Warrenton." 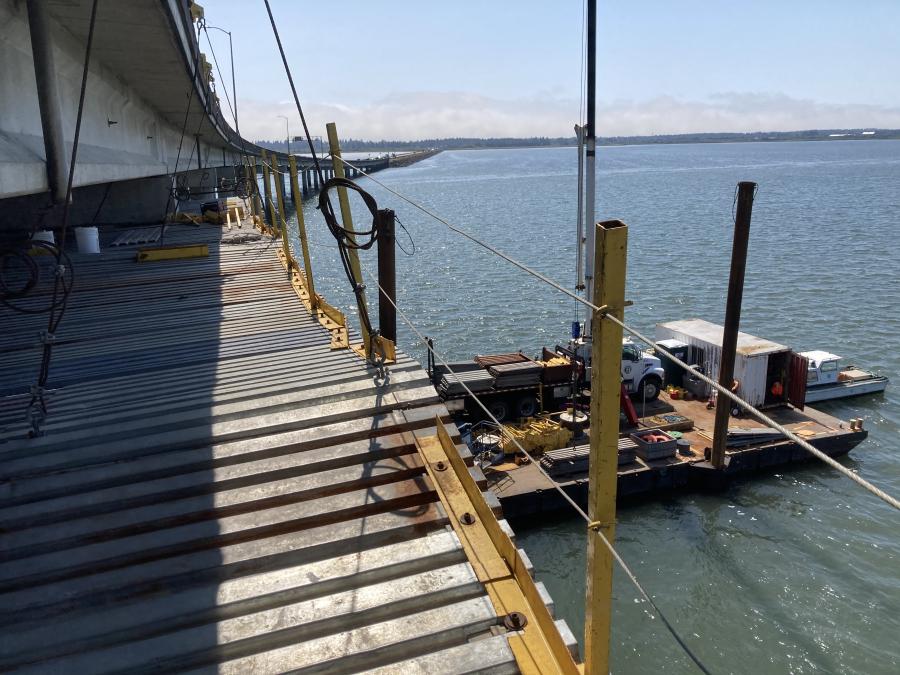 The full nighttime 14-day closure to occur in 2021 has not been scheduled yet. During the closure OSBC will be working on lift span bracing, with traffic to be detoured on U.S. 101 Business.

"So far we have been able to keep the traffic impacts at a minimum," said Torres. "Travelers know about the work and have been accommodating and understanding. We continue to urge drivers to slow down when they are in the construction zone for the safety of everyone."

In addition to the challenges of working on the bridge, OSBC crews and ODOT inspectors are complying with COVID-19 safety requirements.

"They have been taking extra precautions to protect themselves and the community from COVID-19 while still being able to successfully perform their duties," said Torres. "During pre-shift tailgate meetings workers do their best to maintain social distancing measures when not utilizing PPE. ODOT and our contractors have tried to limit our contact with people by bringing our own food or wearing masks when we go to stores or to pick up takeout. We have been taking the pandemic seriously when traveling and trying to do our part to stop the spread of the disease."

The work is proceeding along well into the second year of a three year initiative.

"The contractor is making excellent progress in repairing the damaged concrete on at least 20 of the 53 spans so far," said Torres. "Work will continue to be performed from a barge and ‘safe span' decking underneath the bridge with occasional nighttime single lane closures for crack injection on the girders." CEG