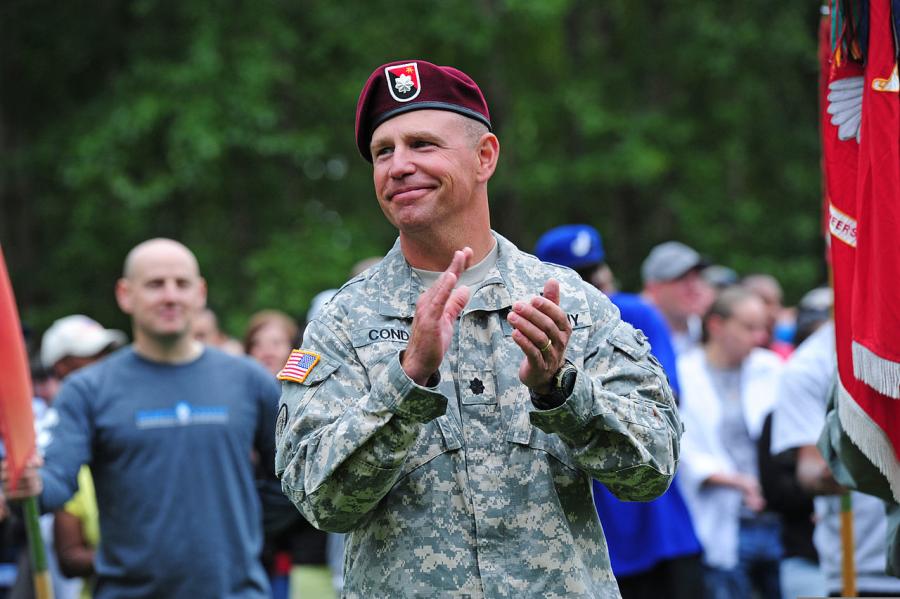 The custom of acknowledging a change in command officers of a military unit is a formal ceremony and dates back to pre-Roman times. It emphasizes the continuity of leadership and unit identity, despite changes in individual authority, and symbolizes the transfer of command responsibility from one individual to another. This transfer is represented by passing the Command Flag, the tangible symbol of the unit, from the outgoing commander to the next senior officer to the new commander.

A native of Cadillac, Michigan, Col. Conde is a graduate of the U.S. Military Academy at West Point with a bachelor's degree in Environmental Engineering. In June 1995, Col. Conde was commissioned a 2nd lieutenant in the U.S. Army Corps of Engineers. He has served in various U.S. locations and in Iraq, Afghanistan and Korea. Challenges he will face include regulatory activities, navigation and dredging, environmental restoration, clean up at former defense sites and other issues.

As Commander since July 31, 2014, Col. Barron had many accomplishments while managing Corps responsibilities in the six-state region, overseeing civil works, engineering, construction and real estate work for Army, Air Force and other activities. Accomplishments include: dredging projects; environmental restoration; work on EPA Superfund projects; flood risk management; and support to Joint Base Cape Cod, Hanscom Air Force Base, U.S. Army Soldier Systems Center and Westover Air Reserve Base. He managed an annual program of $270.6 million in fiscal year 2016 and a projected program of $265 million in FY17.

The Corps' role in New England dates back to the country's founding. An engineer force first proved its value in a military operation in New England in June 1775 when Col. Richard Gridley, at the direction of Gen. George Washington, designed fortifications for the Battle of Bunker Hill. Since then, Army Engineers have been a sustaining force in the field and have accomplished peacetime civil works missions that have helped develop a Nation.

The Corps' mission is to support the Nation, serve U.S. military units worldwide with first-rate facilities, engineering know-how for the Soldier in the field, and as an implementing agent of national water resource policy. The six-state New England region serviced by the District covers 66,000 square miles with 14.6 million people.

In accomplishing its missions, the District contributes to the region's well-being in harbor improvement and maintenance, flood risk management, recreation, water quality and conservation of natural resources. For information about the District and new Commander visit the website at http://www.nae.usace.army.mil/.