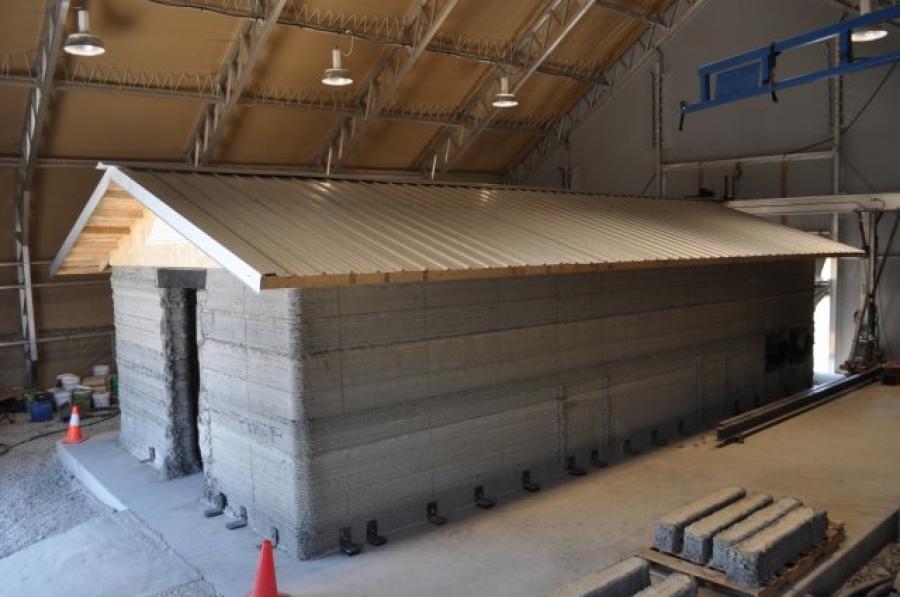 The barracks hut, or B-Hut was created via an additive manufacturing process, which allows semi-permanent buildings to be printed using concrete made from available materials. (Photo Credit: Michael Jazdyk)

The 512-sq.ft. building was created at the Construction Engineering Research Laboratory (CERL) in Champaign, Ill., by the Army's three-year-long Automated Construction of Expeditionary Structures (ACES) program. The barracks hut, or B-Hut was created via an additive manufacturing process, which allows semi-permanent buildings to be printed using concrete made from available materials. In doing so, the Army said it could cut building costs in half, and could reduce manpower by 62 percent.

“ACES will allow the Army to print buildings and other required infrastructure, such as barriers, culverts and obstacles on location. The ACES team designed, built, and validated an additive, three-dimensional concrete printing technology that is a real game changer. Unlike previous efforts, ACES can use up to 3/8 in. aggregate in the concrete that is used. In addition, the ACES project paid particular attention to methods of reinforcing printed concrete, both horizontally and vertically."

According to the Army, CERL has partnered up with NASA to find a way to make the technology used in the ACES program more mobile.

In addition, ERDC and Caterpillar have announced a partnership in a Cooperative Research and Development Agreement. The partnership will focus on finding ways to commercialize the technology used in ACES, especially in relation to disaster relief and other, more typical construction endeavors.