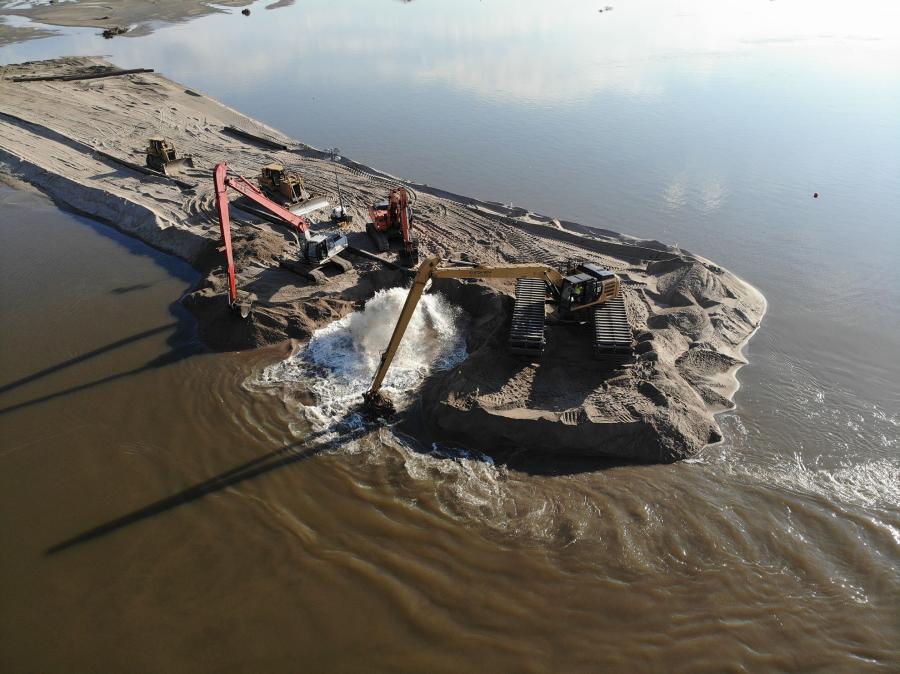 The Missouri River Levee System L-575 sustained seven breaches, along with significant other damage during the March 2019 event. These breaches ranged in size, with the largest breach being approximately 2,000 ft. in length. (USACE — Omaha District photo)

Although much work remains following last year's devastating flooding, the U.S. Army Corps of Engineers (USACE), Omaha District, has officially closed breaches on the Missouri River Levee System L575. The L575 system provides an initial level of flood risk management to the area behind this downstream portion of the levee. 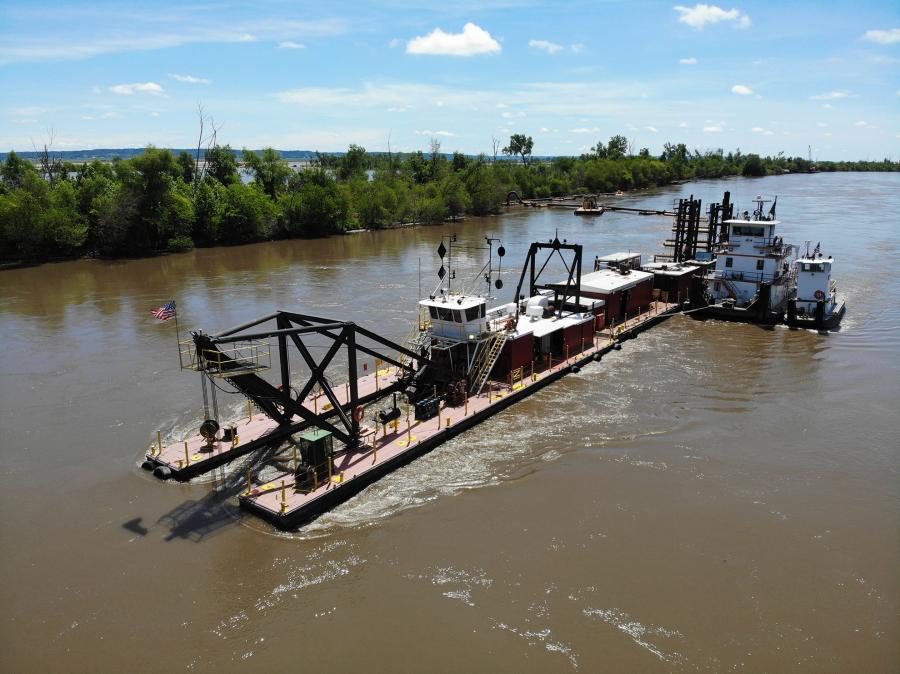 Crews managed to keep the work moving throughout the winter months. Bohlken said the 2019 flood that caused so much damage was actually a series of events.

"The first, and most destructive, flood followed the March 2019 ‘Bomb Cyclone' that hit the Midwest. This event set record river stages at 45 different gages across four different states. Following the March event, another high-water event was experienced during late May and early June. No significant damage was experienced during this event, but the high-water levels did impact the ongoing flood repair efforts.

"The third event occurred in mid-September, with nearly eight inches of rain across parts of Northeast Nebraska and Central and Eastern South Dakota. This event led to 19 river gages seeing historical river stages. Once again, there was not significant damage associated with this event, but it did impact ongoing flood repair efforts."

The Missouri River Levee System L-575 sustained seven breaches, along with significant other damage during the March 2019 event. These breaches ranged in size, with the largest breach being approximately 2,000 ft. in length.

According to Bohlken, closing breaches "A" and "B" were critical milestones in repairing the L-575 levee system.

The biggest challenge with designing the levee repairs has involved efforts to do so while the river was still at flood stage.

"This meant that not only was water actively flowing through the breach locations during many of the repairs, but that the team was also not able to conduct an onsite damage assessment," said Bohlken. "To ensure levee repairs continued forward, the team utilized aerial imagery where site access was not possible to develop preliminary designs for repairs in those locations." 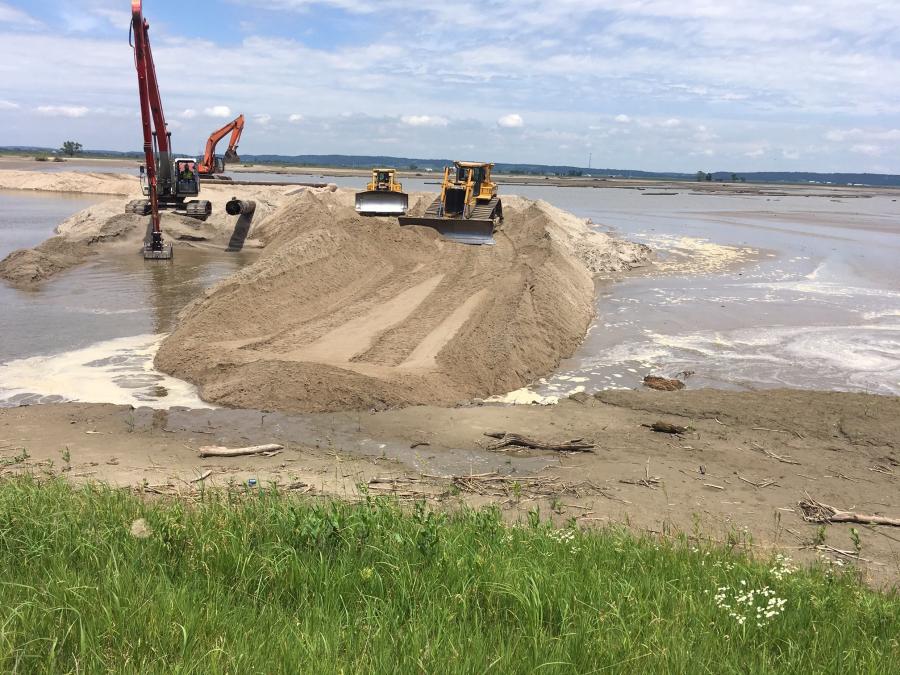 For some time, crews worked on the levee crest repairs at both the "A" and "B" inlet breach sites, increasing the resiliency of the repairs at these locations. The contractor conducting the efforts is Weston Solutions Inc. of West Chester, Pa., and is still on site.

For L575, the contract for final levee repairs was awarded to Aptim Federal Services LLC of Alexandria, Va., in December 2019, in the amount of $58.3 million. To date, nearly $110M worth of repair contracts have been awarded on the L575 levee system. A final dollar amount is not certain at this time, as the team has not been able to fully inspect the damaged levee system.

Bohlken noted that the significant repair efforts made to date would not have been possible without the levee sponsors and stakeholders.

"There are project sites where the majority of the equipment operators are local farmers and landowners. Additionally, the levee sponsors have been instrumental in ensuring project site access and the availability of borrow material for the flood repair efforts.

Area engineer Brendan Kight of the flood recovery construction office, construction division, Omaha District, USACE, said the biggest concern for the Omaha District regarding the 2019 flood repairs has been completing levee repair work through a very active weather season, and while the Missouri River was still at or above flood stage.

"The Missouri River at Nebraska City was at or above flood stage for around 270 days in 2019, starting on March 15, which was more than three months longer than during the 2011 flooding. Most traditional levee repair methods are developed to repair the damaged levee system after flood waters have receded, so this added a much higher level of complexity to the repair process.

"Additionally, it wasn't until October that there was a five-day stretch of weather were no precipitation fell in Omaha. This continued to saturate the already wet project sites, making repair efforts more difficult and requiring more handling and conditioning of materials, such as clay soil that is used to repair the levees."

Many of the project sites along the Missouri River were either underwater or completely saturated when repair efforts began, and some of the sites are still completely saturated. This meant that the soil material that would have historically been used to repair the damaged levees was either inaccessible or saturated to a level that it would either require additional handling and conditioning to be used or was unusable. 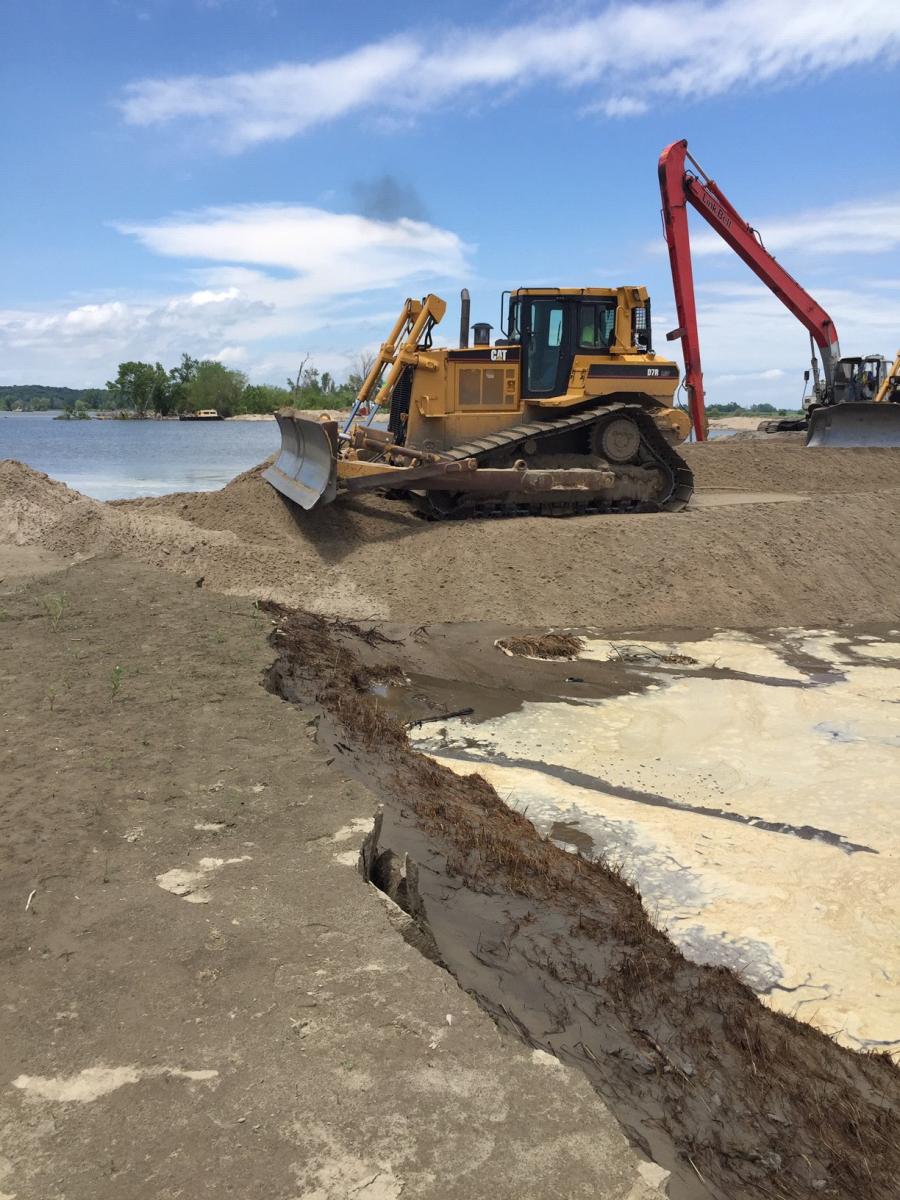 The team focused on repairing breaches and critical section loss areas. These locations represented the highest risk to life safety. At locations where possible, such as on many of the tributary systems, there also is a push to completely rehabilitate damaged levee systems so that the levees can be returned to the levee sponsors.

Kight said the primary concern when working near or on the water is the safety of everyone on site.

"This means that at times work efforts may have been slowed or paused to ensure work was being done safely. Two other significant concerns have been site access and suitability of levee repair material, mainly clay soil. Substantial effort has gone into restoring site access to the levee repair locations, as the previous access routes were either under water or damaged/destroyed during the flooding. Additionally, local soils are highly saturated, making them harder to excavate and place."

Weather has been a significant factor in the repair work, according to Kight.

In addition, mining cohesive material has been a significant challenge for all the projects focused on repairing the Missouri River Levee Systems.

"The majority of the cohesive soils in the local area are highly saturated, making them extremely difficult to excavate. There have been numerous occasions where construction equipment was getting stuck at the clay excavation [mining] sites because the soil was too saturated to work on/with. Additionally, once the clay has been excavated, it has required significant conditioning to dry to a level that it can be effectively placed to repair the damaged levee systems."

As far as conducting resiliency and interim repairs throughout the L575 levee system, the team has focused on increasing the width and height of the repairs at both the "A" and "B" breach locations, as well as closing the downstream outlet breaches, where water behind the levee system from the upstream inlet breaches broke through the levee to get back to the Missouri River. 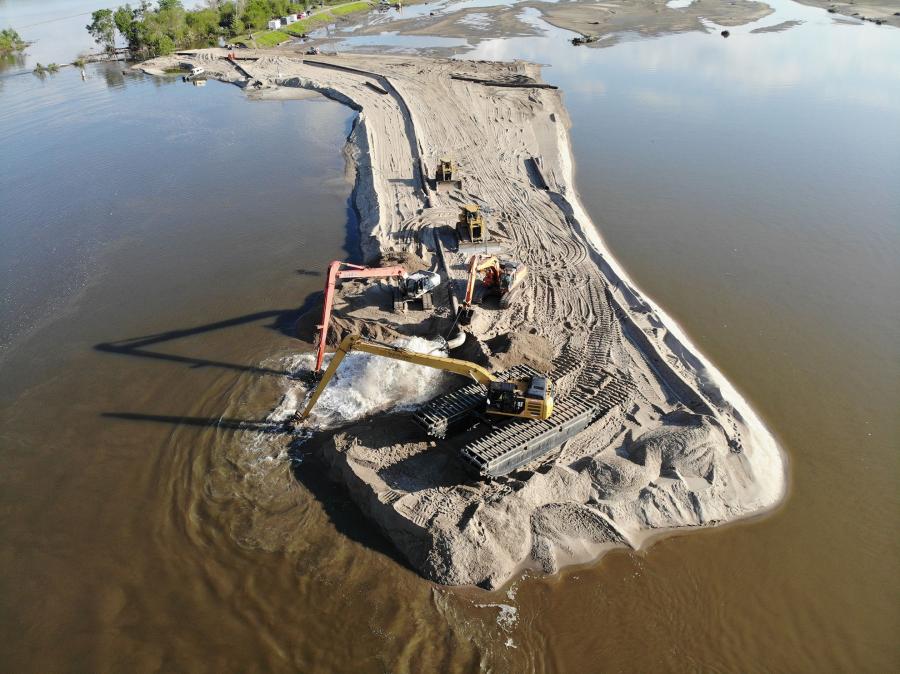 "There also has been a focus on restoring the critical section loss locations, as these also are significant ‘weak spots' in the levee system that have a higher level of risk associated with them," said Kight.

To restore areas that experienced significant erosion during the March 2019 flood event, the work process requires excavating the damaged location until a solid base to build upon can be established. Material is then placed in lifts and compacted until the entire levee section is restored.

Restoring the levee crest requires a smaller-scale effort, including putting down an aggregate surface that allows vehicles to travel on top of the levee. The levee crest is one of the main ways to access the levee, so until the crest can be restored site access can be very limited.

Kight noted that the most time-consuming part of the project so far has been securing materials for the levee repairs.

"During previous flood events, such as in 2011, there was an abundance of material that was accessible and usable to repair the damaged levee systems. Due to the sustained high-water levels and active weather patterns experienced in 2019, material availability was extremely limited and a lot of the material that was available required more work to condition to a point where it could be used to repair the damaged levee systems." CEG