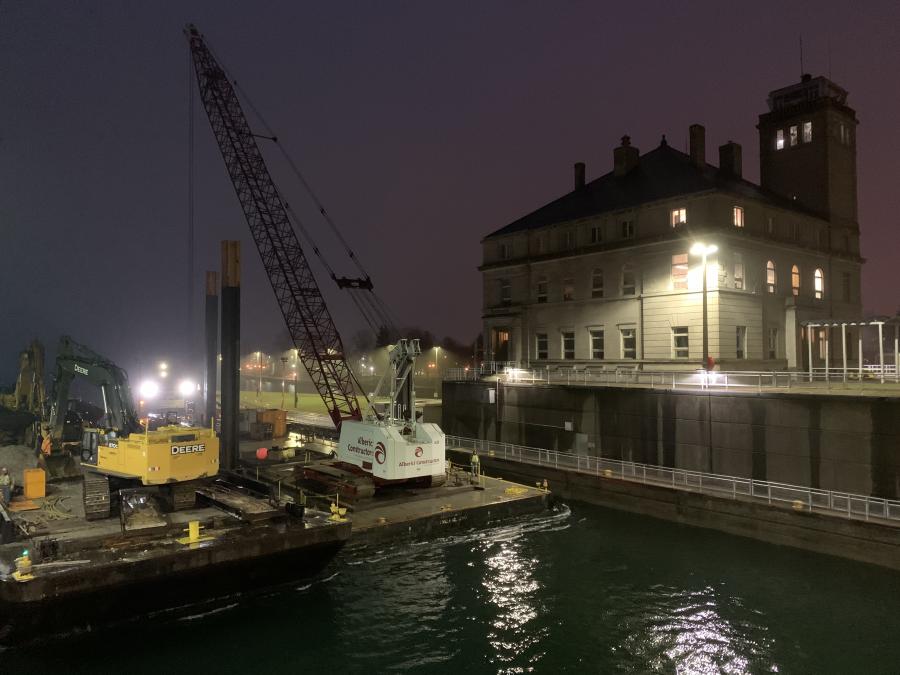 Joint venture contractors Kokosing-Alberici mobilize some of its equipment to the New Lock at the Soo site on April 13, 2021, in Sault Ste. Marie, Mich.

The U.S. Army Corps of Engineers (USACE) New Lock at the Soo project is on schedule as construction resumed on phase one and is initiated on phase two.

Trade West continues phase one, deepening the upstream channel to the Sabin and Davis locks, which will be replaced by the new lock. USACE officials expect phase one completion in November 2021.

Kokosing-Alberici is starting phase two this year, rehabilitating the upstream approach walls. This will stabilize the existing approach walls allowing modern vessels to tie up and wait their turn to pass through the new lock. Phase two should be complete by fall 2023, with winter seasonal breaks.

"The Detroit District is looking forward to working with contractors Trade West and Kokosing-Alberici on phase one and phase two of the New Lock at the Soo," said Lt. Col. Scott Katalenich, commander, USACE, Detroit District. "We had a partnering meeting with phase two contractors who are starting this year and are confident this project continues the successful construction of the new lock."

The third phase, construction of the new lock chamber, will include rehabilitating downstream approach walls and is currently at the 95 percent design milestone. Bid solicitation should begin this summer with phase three construction starting in spring of 2022.

The Soo Locks are situated on the St. Marys River at Sault Ste. Marie, Mich., and allow vessels to transit the 21-ft. elevation change at the St. Marys Falls Canal. More than 85 percent of commodity tonnage traveling through the Soo Locks is restricted by vessel size to the Poe Lock. The New Lock at the Soo project is constructing a second Poe-sized lock (110 ft. by 1,200 ft.) on the existing decommissioned Davis and Sabin locks site.

The Soo Locks are a nationally critical infrastructure and this critical node's reliability in the Great Lakes Navigation System is essential to United States' manufacturing, according to a 2015 Department of Homeland Security study on impacts of an unexpected Soo Locks closure.