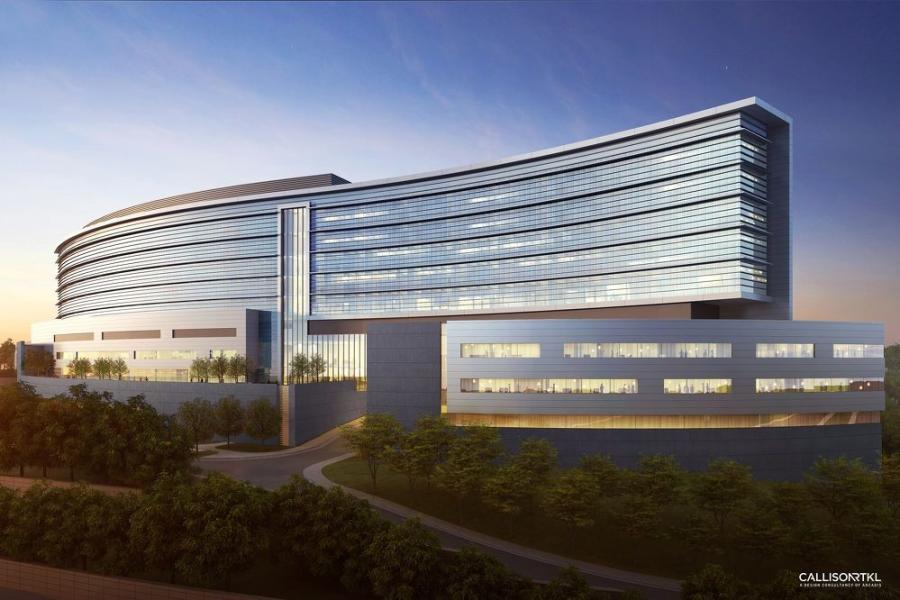 The building will be eight stories. The design is an homage to the slow-moving curve of the neighboring Hudson River. (CallisonRTKL Architects photo)

Considered the largest construction project in the city of Poughkeepsie's history, a new inpatient pavilion being built at Vassar Brothers Medical Center will change how patients in the region experience health care. The $545 million, 752,000 sq.-ft. facility includes an emergency department and trauma center; state-of-the-art operating suites; a 30-bed critical care unit; more than 200 patient rooms; a rooftop helistop; and a conference center.

“This project represents the most significant transformation of the medical center since its inception in 1887,” said Tim Massie, senior vice president of marketing, public affairs and government relations at Health Quest. “The patient pavilion will allow Vassar Brothers to replace its outdated, semi-private medical/surgical patient rooms with private ones. In so doing, the Medical Center will introduce patients in our region to a dramatically enhanced hospital experience. It will be a facility that melds the latest technology with scenic vistas that also have a role to play in the healing process.”

The building will be eight stories. The design is an homage to the slow-moving curve of the neighboring Hudson River.

“The residents of city of Poughkeepsie, Dutchess County and the Hudson Valley deserve a medical center like this,” said Massie. “The patient pavilion at Vassar Brothers Medical Center will be a landmark and asset for the community, a gateway to the city of Poughkeepsie and a site known for the excellent patient care and services provided by its staff.

“The mayor has spoken with pride about how this project is the catalyst for a new renaissance for the city. Businesses looking to move here or expand — and their employees — want to know there's a quality health care system in the area. Health Quest and Vassar Brothers Medical Center are the health care providers of choice, and that will be brought home again when the new building opens.”

The medical center has managed patient volume while attempting to modernize and maintain the existing facility. Based on the age of the buildings, future investment was deemed a waste of resources. Because the medical/surgical units and ICU have outlived their usefulness, it was determined the most effective way to address the problem was to construct a new patient pavilion. Massie believes the timing is right for the new facility.

“Health Quest is a non-profit system, with four hospitals, including Vassar Brothers and other affiliates, that employs more than 6,000 people throughout the Hudson Valley and northwestern Connecticut. Bringing in construction jobs over the course of the project, as well as other permanent jobs, will have a direct and positive impact on the economic well-being of the city of Poughkeepsie and the region as a whole.

“It's energizing and reassuring to see the progress. It seems like only yesterday we broke ground, and now this grand landmark is taking shape, giving physical, tactile life to our vision. There is palpable excitement felt throughout the campus, as staff and patients watch this incredible transformation. This project has created quite a bit of buzz and excitement with each week of progress. It's a grand structure, and we are grateful to all the skilled workers who will be able to look back on this project decades down the line and take pride in making what was once a dream a reality.”

The more than half-billion-dollar construction project will feature four floors of private inpatient rooms with bathrooms. The rooms will be 330 sq. ft., with each floor housing 66 rooms. The additional patient floor will be able to accommodate another 66 beds, when patient volume requires the space to be completed and opened.

With approximately 58,000 sq. ft. of space, the 66-bay emergency room/trauma center will be almost twice the size of the current emergency room that treats 70, 000 patients annually. There will be 15 operating suites, and a 72,000-sq.-ft., 30-bed Intensive Care Unit (ICU) three times larger than the existing unit.

Visitor lounges will be constructed, along with a 240-seat cafeteria and outside seating areas. A 300-seat community conference center for staff, etc. also is included in the plans.

According to Larry Bell, vice president of construction of Health Quest, the 660-ft.-long structure is in two different seismic class zones.

“We had to design two types of seismic foundations that were then combined into one building. Another challenge was bridging the existing power plant. The new power plant is contained within the new building, so during construction a temporary power plant is operational to keep the existing facility running smoothly.” 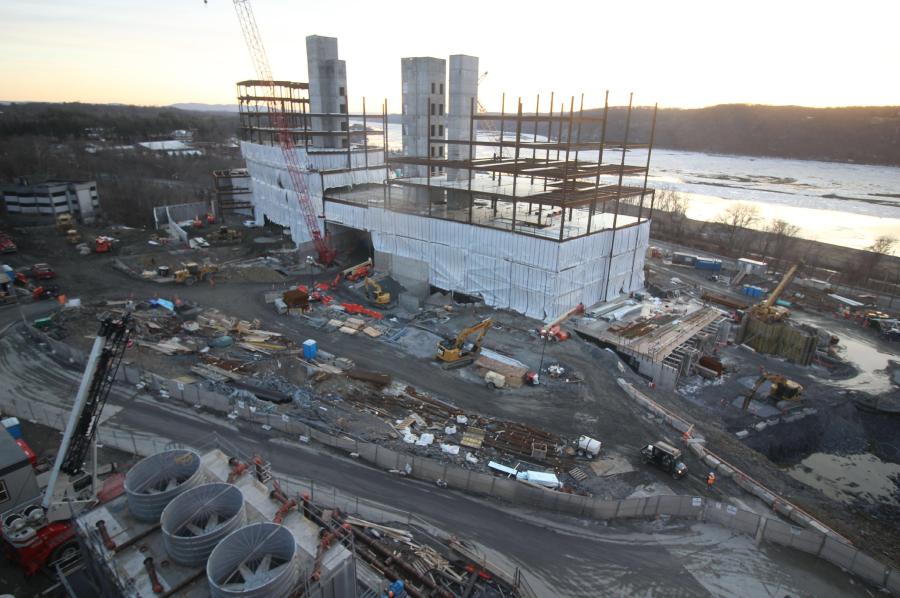 In addition, a road that goes through the middle of the building has proved difficult for clearance levels. Another concern is the overall slope of the site.

“The pavilion is being built on a slope with a 50-foot elevation drop from top to bottom. And the extensive existing infrastructure has offered many challenges. This is not a greenfield site.”

The plans call for constructing an ER/trauma area and operating suites. Bell said building this area is no different than the inpatient or critical care units, as they are all part of the overall design.

He also noted that the new building will be tied to a portion of the existing hospital.

“We have to make sure the vertical and horizontal relationships are spot on. We will have to coordinate the utilities between the two buildings.”

As for the condition of the site prior to construction, “There were numerous residences, several commercial buildings, a helistop and utilities that traveled through the site. The utilities had to be disconnected, and some were relocated. The other buildings were all demolished to make way for the new patient pavilion.

The concrete foundation sits on rock, so blasting was required.

“The team drilled down in some cases up to 70 feet to place the charges. However, the blasts were only felt minimally, because the area was covered with up to 12 mats weighing 12,000 pounds each, to stifle the sound and prevent debris from spreading.”

“To ensure quality and safety, blast vibrations were monitored at key hospital locations to make certain no damage occurred to the existing facility's foundation and surrounding properties, as well as to not affect patients. The team prepared the medical, nursing and ancillary staffs for each blast with a number of alerts, including one day, one hour, five minutes and one minute prior.

“There were 100 blasts during excavation. We removed more than 100,000 cubic feet of rock with blasting and bulk excavation next to the existing hospital.”

Some of the main equipment includes a rock crusher and screener, several 4-yd. excavators, four 13K lulls, one 6-yd. front end loader, one Cat 735 rock truck, one 40-ton roller and one roller with sheep's foot. 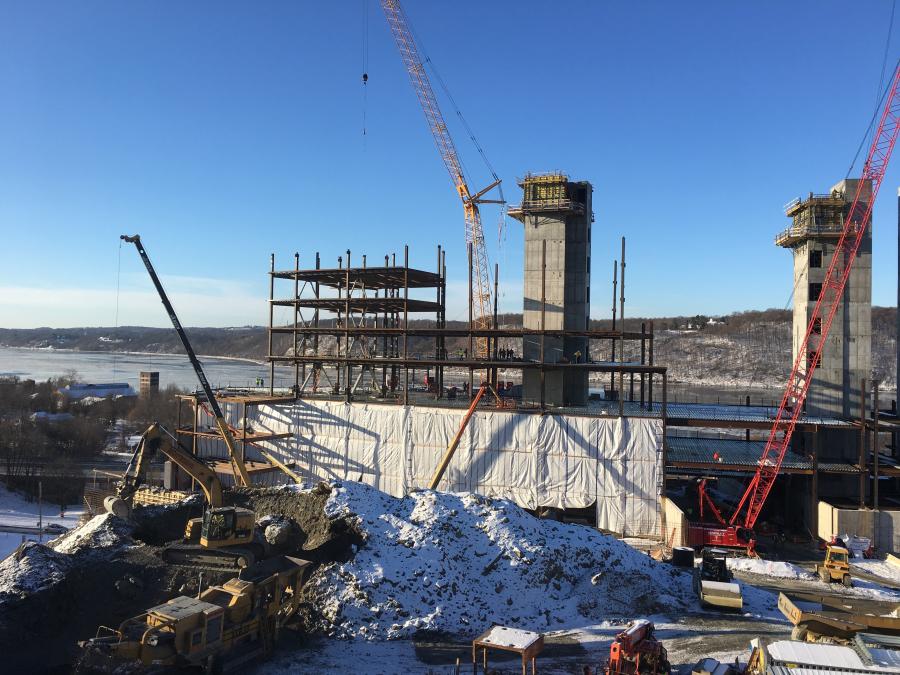 “We are raising the bar on how health care is delivered in this community, and we are changing how patients in our community experience that care,” said Françoise Dunefsky, chairwoman of the medical center's Board of Trustees. “I am quite certain that if brothers Matthew and John Guy Vassar were with us today, they would be very pleased with where we are taking their hospital.”

Vassar Brothers Medical Center houses the first and only cardiothoracic surgery center in the mid-Hudson Valley, a state-of-the-art birthing center, pioneering centers for advanced surgery and wound care, the area's only Level III Neonatal Intensive Care Unit and the new Division of Neuro Interventional Surgery for advanced treatment of aneurysms and acute stroke. The new pavilion was designed to complement the existing facility.

Steve Stokes, LEED GA, senior associate vice president, CallisonRTKL Architects, said the overall vision for the new building was to create a destination of care for the Hudson Valley region, to advance the clinical excellence and attract top-level medical staff and other talents. Transforming the patient and family experience also was essential, along with creating a facility that would be an asset to the community.

“It's a very long building — 60 stories if stood up vertically — so if it were straight, it would have a factory appearance. When you go to other facilities this long and tour them, the corridors look like they go on forever, which is known as the 'hotel' or 'bowling alley' effect.”

The unique design serves two purposes. In the interior, the curved bed floor diminishes the elongated feel. From the exterior, the two undulating curves work in unison to pay respect to the Hudson River.

Stokes said when the quality of environment matches the high quality of care, it's a win for everyone involved.

“The Hudson Valley is such a beautiful landscape, so we wanted to provide access to the outdoors. We integrated that into the design with an outdoor terrace and dining area.”

Jay Stasack, senior associate at CallisonRTKL, added, “To accomplish a piece of architecture with this level of quality and vision, you need a client that is ready, willing and able to push the boundaries on a project like this. Health Quest and its leadership team have the vision to bring this bold new patient pavilion to the Hudson Valley.”

During construction, the public can get a first-hand look at what the interior of the final building will look like when complete. The “prototype experience” is a life-size, realistic model of medical/surgical and critical care patient rooms, as well as nurse care centers.

The self-guided audio tour includes a video and gallery of renderings and floor plans that highlight new clinical areas, environmentally friendly construction highlights, an overview of the medical center's future campus and the different phases of construction. A display offers touchable materials that will be used throughout the new structure.

The patient pavilion is expected to open for patient care in early 2019.