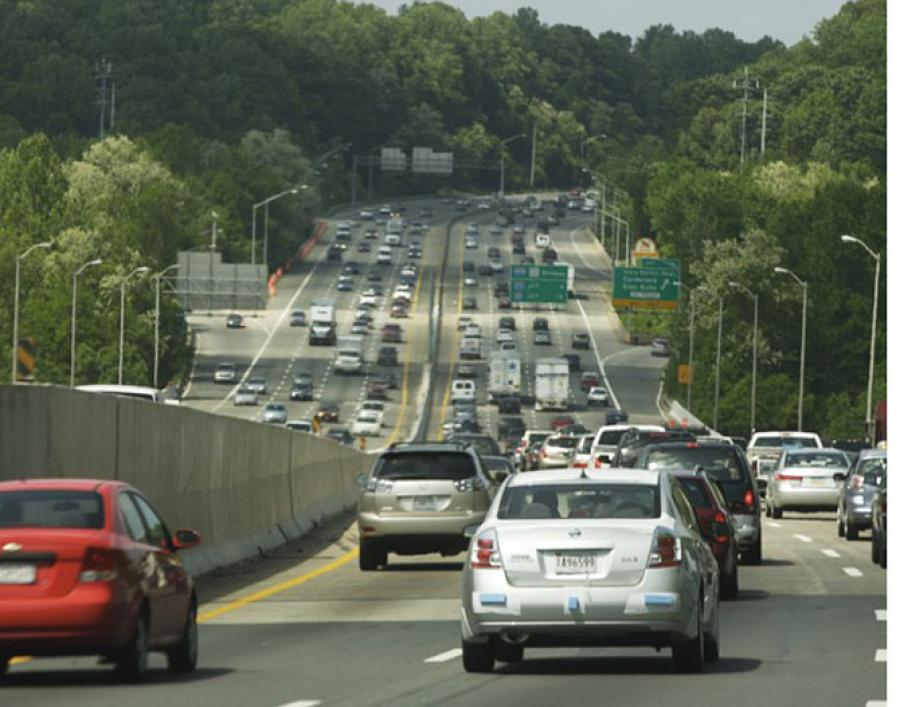 Traffic on the American Legion Bridge over the Potomac River.

The Virginia Department of Transportation (VDOT) is scheduled to begin construction in 2022 on its I-495 Express Lanes Northern Extension project, dubbed 495 NEXT.

The northern Virginia effort aims to enhance traffic flow and reduce cut-through traffic on local roads and residential streets. It extends the existing I-495 Express Lanes north by two and a half miles, with new and improved connections at the Dulles Toll Road and the George Washington Memorial Parkway, in the Fairfax County suburbs west of Washington, D.C.

Both roadways are notorious for congestion.

"The $600 million project is expected to cut express lane users' travel times by 24 minutes, reduce crashes by 20 percent and create 6,300 jobs and $880 million in economic impact," according to an early October news release by VDOT.

Preliminary project concepts on the transportation department's website show 4 mi. of new bike and pedestrian connections, including a shared-use path that runs parallel to I-495 from Lewinsville Road to near Live Oak Drive in McLean, and connects to existing Tysons Corners facilities.

In addition, a newly proposed Build Alternative wall will be constructed along Live Oak Drive near the George Washington Memorial Parkway interchange, and nine existing noise walls are to be replaced.

At Live Oak Drive, Georgetown Pike, Old Dominion Road, and Lewinsville Road, seven bridges with pedestrian accommodations, sidewalks, bike lanes and crossings will be replaced or rehabilitated, according to VDOT.

Finally, stormwater management facilities are being installed and funding is available for the restoration of the Scotts Run stream.

Lane Construction Corp., headquartered in Connecticut, will oversee the design-build effort on 495 NEXT.

Residents Have Concerns About Project's Cost and Design

While commuters and others familiar with I-495's gridlock on both sides of the Potomac River anticipate the project's financial close in December, and the new lanes opening in 2025, some residents living near or on Live Oak Drive in the McLean area of Fairfax County's Dranesville District expressed concern in community meetings on the matter as well as some of the proposed project concepts.

With construction planned in the community to begin next year, residents' concerns have centered on four areas: sidewalks, the moving of Live Oak Drive, which would likely mean a loss of mature trees, impaired sightlines with the new bridgework, and stormwater management.

April Georgelas, a homeowner on Live Oak Drive, said in an interview Nov. 18 with The Community newspaper, "Twenty years ago, Live Oak Drive was moved to add five lanes to the beltway. [VDOT is] destroying what vegetation we still have left that they didn't take the first time, and we've tried to regrow. In moving the street [again], they will remove the trees and vegetation [once more]. The stormwater problems will only increase. We are on septic here, and the stormwater is going to create such a nightmare."

Susan N. Shaw, megaprojects director of the Northern Virginia District at VDOT, responded to the concerns, by telling The Community that the design-builder may make refinements to the plans during the final design.

"The latest version of the Live Oak plans are presented in the FAQ section of the website," she noted.

Shaw went on to explain that about 0.25-mi. of Live Oak Drive's 1-mi. length shifts to the west. The new section will be built in the same manner as the existing section, with one lane in each direction.

"No sidewalks are being constructed in this section to avoid impacting parking spaces at the Langley Swim Club and to minimize to the extent possible right-of-way and stormwater impacts," she added.

Concerning the removal of vegetation running parallel to Live Oak Drive, Shaw pointed out that the project team is conducting a tree survey to identify mature growth impacted by the 495 NEXT project.

"As part of the project, we will develop a vegetation plan that will include native trees and plants to be planted within the VDOT right of way where feasible," she told the local news publication.

In response to concerns about sightlines and the upcoming raised Live Oak Bridge, Shaw explained that the new span will be 3 ft. higher and constructed parallel to the existing bridge so that community members will always have access to either side of the interstate during the 495 NEXT work.

Additionally, an all-way stop-controlled intersection is being proposed at the bridge's end to provide drivers with safe turning movements.

"The project team recently conducted a community walk along Live Oak Drive with residents and community members to review stormwater concerns and challenges," she explained. "495 NEXT will improve the stormwater runoff along the corridor, and the selected stormwater management approach satisfies the requirements stipulated by the Virginia Department of Environmental Quality (VDEQ). This approach was confirmed after extensive coordination between VDEQ, VDOT and Fairfax County to identify a balanced solution."