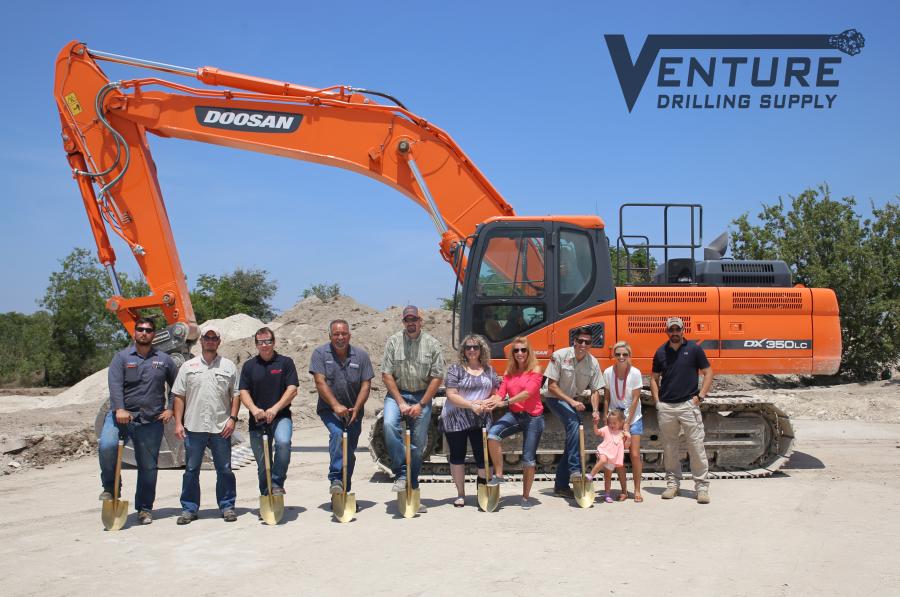 Venture has exclusive rights for the Doosan line in approximately an 80-mi. radius around Austin and handles the Epiroc line of hydraulic attachments for much of Texas. In photo, Venture family members include Michele McCarthy (6th from L), executive manager; Colt McCarthy (7th from L), president; Abigail McCarthy (8th from L); and Daphne McCarthy (9th from L).

Like all businesses, equipment dealerships face challenges, such as competition, economic and market changes, staffing issues, evolving technological advances and more. Sometimes, though, the challenges are of a more personal nature.

Colt McCarthy, Wayne's son and president of Venture Drilling, recalled how everyone at the company banded together to overcome that extremely difficult time.

“We had a lot of loyal people, including employees and family, that stepped up to help my mom (Michelle McCarthy) operate the company,” he said. “Her three children were too young to be of much help at the time.”

Venture recovered from this tragedy and today has grown from its humble roots in Tahlequah, Okla., to a three location supplier of construction and drilling equipment and supplies. The Tahlequah, Okla., Midland, Texas, and Austin (Pflugerville), Texas, branches all focus on the drilling industry. In addition, the Austin location also sells the Doosan and Yanmar lines of construction equipment.

The company grew steadily under Michelle in the years after the tragedy, helped in part by the oil and gas boom of the late 1990s, according to McCarthy. Venture became the Ingersoll Rand drilling distributor for Oklahoma, Kansas and Missouri during this time.

When Colt graduated from college in 2006, he immediately started working in the rock quarries.

“I always had more of an interest in the business from the contractor's side of things than from the sales end,” he recalled.

Shortly after that, Atlas Copco approached the company about acquiring Rock Drilling Supply, a drilling supply dealer just outside of Austin, Texas. One requirement, however, was that a principal needed to reside in the market, so Colt decided to move to Austin in 2007 and launched the new Venture branch in nearby Georgetown.

“We weathered the recession and started to do very well in 2011 and 2012,” he said. “By then, we had good employees in place and saw an opportunity to expand to other markets and got into the construction equipment field with the Doosan line. Drills are not that different from heavy equipment in terms of service. We had the mechanics in place, so it was a natural fit. We started looking around for a line of equipment in 2013. We felt getting into the construction world would help to shield the company from future oil downturns.”

Venture took delivery of its first Doosan machines in 2014.

“We handled Doosan air compressors after they bought Ingersoll Rand,” he said. “We were impressed with the company and the quality of its products. We first saw their equipment line at ConExpo in 2011. We inquired then about being a dealership. We knew we had the room and the service know how.”

As part of Venture's agreement with Doosan, Colt agreed to move the dealership closer to Austin and found the property in Pflugerville on “equipment row.”

The company moved into the new facility in June 2017.

Venture has exclusive rights for the Doosan line in approximately an 80-mi. radius around Austin and handles the Epiroc line of hydraulic attachments for much of Texas.

Quarry customers are prospects for wheel loaders and excavators.

In a short time, Venture has partnered with contractors on some high profile jobs in the Austin area and has teamed with A&R Demolition on the I-35 corridor job and introduced the contractor to the Combi-Cutter CC3300, which pulverizes concrete and rebar.

Contractors like working with Venture. “We know what it is like to be a contractor,” Colt said. “We think like contractors. We are passionate about what we do, and I believe the facility we have shows our commitment to the area. We are not just flopping a few machines out in the market. We are here to stay. Austin has been my home for 11 years now and my family does not plan on leaving.”

The company recently added Yanmar excavators to its lineup, “which will bring us into entirely new markets for compact equipment,” Colt said. “Yanmar is a fantastic machine with one of the lowest warranty work rates in the industry.”