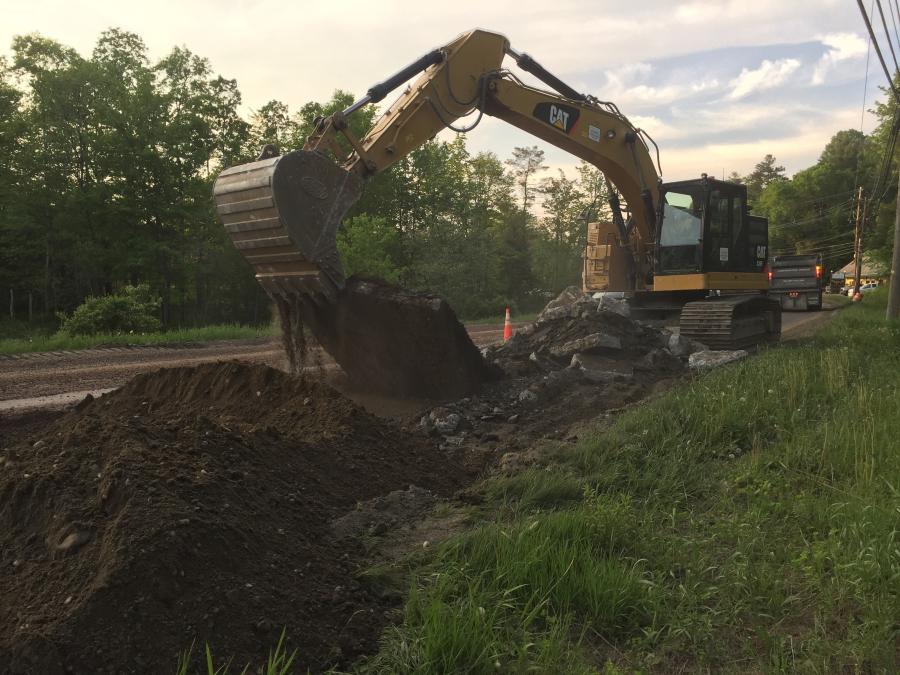 The Route 100 project addresses the poor pavement condition along the corridor, due to underlying concrete slabs that have caused reflective cracking into the top courses. (VTrans photo)

A $25 million road rehabilitation has crews working after hours in the towns of Waterbury and Stowe, Vt. The Route 100 project, approximately 9.5 mi. long, is necessary to address the poor pavement condition along the corridor, due to underlying concrete slabs that have caused reflective cracking into the top courses.

“The project will remove the slabs and fill the voided area with new subbase, and will rebuild the pavement structure,” said Matt Bogaczyk, Vermont Agency of Transportation (VTrans) project manager. “The finished product will be a road with consistent subbase and corrected banking, which will reduce maintenance costs and increase safety to road users.

“The condition of the pavement has deteriorated to a 'very poor' level. The decision was made to address the pavement condition and the longevity of the road by removing the concrete slabs below. The resulting rehabilitated road is forecasted to last 20-plus years without major reconstruction, rather than seven to 10 years, which is typically associated with a functional overlay.”

Bogaczyk said the length of the project was riddled with lateral reflective cracking from underlying concrete slabs in various stages of disrepair, as well as potholes and rutting from years of freeze/thaw patterns and heavy traffic loading. The average annual daily traffic of the route ranges from approximately 9,000 to 15,000 vehicles.

“Route 100 is a very busy route, taking traffic from the interstate exit in Waterbury north to the tourist destination of Stowe. “In addition to the tourist traffic loads, there are many commuters along this route who have minimal other options to get to the interstate.”

Bogaczyk said most of the ongoing construction is being performed during the off-hours. 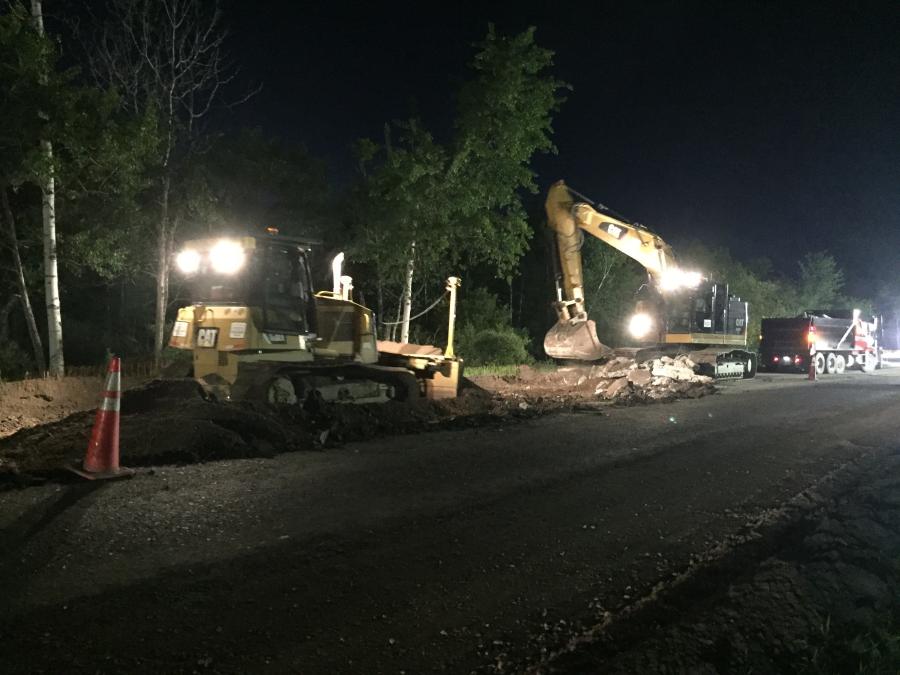 “Traffic patterns were evaluated over the course of a 24-hour period, and it was found that there was a major decrease in traffic in the overnight hours. During the summer months, data shows a strong relationship with commuter traffic. Based on this information, the project restricted lane closures to only occur between 7:00 p.m. and 6:00 a.m., unless necessitated by an emergency situation. The only exception to this restriction was a short period of time where some tree clearing was necessary, and the contractor was given permission to work in daylight, to limit associated risks with clearing.

So far, travel issues have not been significant under normal operation, due to the requirement for nighttime work. There have been some minor daytime disruptions due to emergency situations, but as a whole, traffic has not encountered major, recurring delays.”

Because the pre-construction condition of the pavement along the corridor was in bad shape, the timing was right to make the repairs.

“The surface contained many lateral cracks, reflective of the underlying concrete slabs, as well as potholes. Furthermore, there was an inconsistent travel lane/shoulder width along the project length. When this project is completed, road users will have a brand new surface that will be banked according to engineered designs, and it will remain in better shape for a longer time period. Furthermore, the lane and shoulder widths will be more standard along the length of the project — an 11-foot travel lane and a 5-ft. shoulder, in most areas.

“The width of the shoulder will allow for some delineated bike lanes along this bicycle priority corridor and provides bicyclists wide shoulders in non-delineated areas. A new traffic signal will be added at the intersection of Route 100 and Guptil Road to improve safety and congestion, and drainage will be improved along the length of the project.” 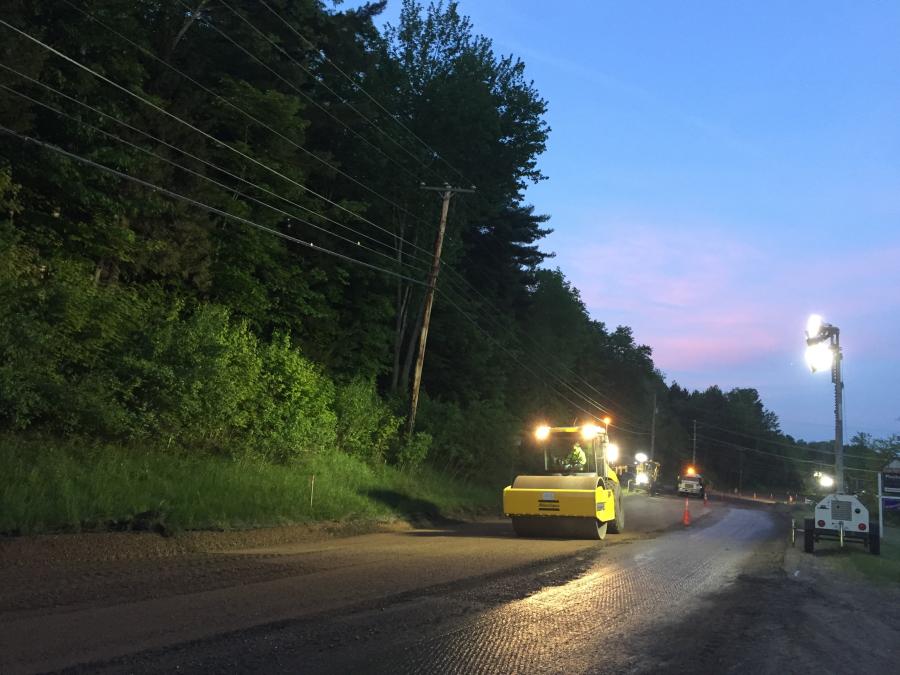 Work officially began the first week of April 2018, with a contract completion date of October 2019. Having multiple staging sites along the length of the project cuts down on trucking time and increases productivity, as materials and equipment can be stored in areas closer to active work zones. In addition, large staging areas have been difficult to find and permit along this corridor because of surrounding environmentally sensitive areas.

Bogaczyk said crews are dealing with noise and light concerns during the nighttime hours, to minimize disruptions to travelers and nearby residents.

Currently, the contractor is completing drainage replacements and underdrain installations along the route. Work has begun on the milling of pavement; slab removal; subbase replacement and grading; and base course repaving. Workers have completed the rock ledge scaling and tree clearing required by the contract, and are planning to complete the necessary drainage replacements and underdrain installations. Work has begun and is progressing in a linear fashion to the north on the milling, concrete removal, subbase installation and grading and base course repaving.

Bogaczyk noted that weather this spring has been a factor.

“Work in the road was slightly delayed due to some late season snow storms. Also, some heavy rain storms have created some significant challenges in maintaining a good driving surface. Rain has caused transitions from gravel to hard concrete surfaces to develop large potholes in the travel lane that require constant monitoring and maintenance work. It is likely that further rain storms will create the same issues in travel way deterioration, however, the contractor has been able to respond quickly to these situations to alleviate the issues.” 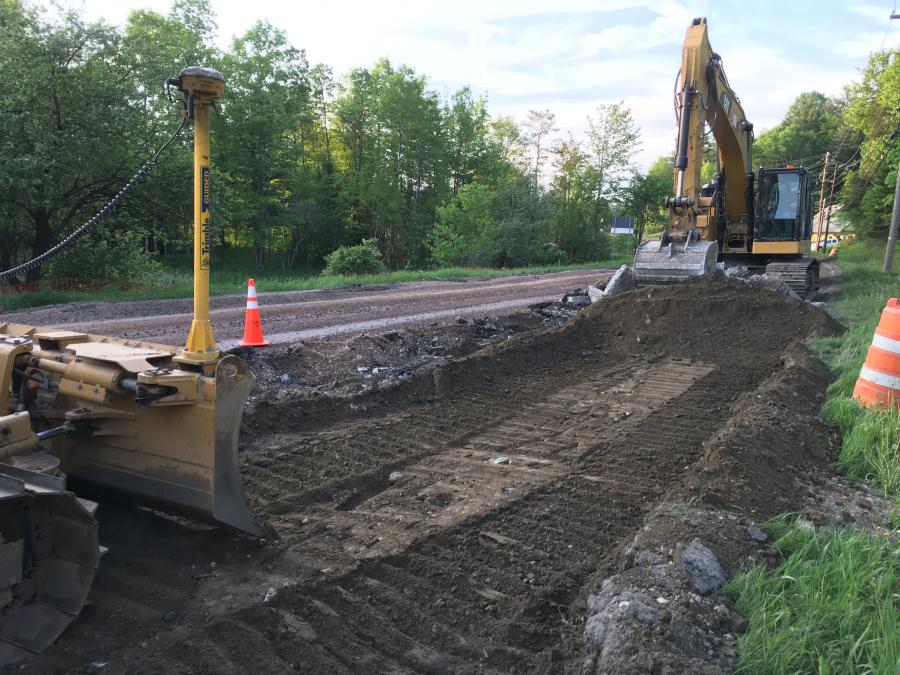 Looking ahead, the majority of the work will be a continuation of the concrete removal and rehabilitation work associated with the removal. Aside from the travel way work, guardrail replacement will take place after paving activities. Also, there will be a new sidewalk installed as part of this project in Stowe, and a new traffic signal at the intersection of Route 100 and Guptil Road.

Main equipment being used on the job includes excavators, loaders, a grader, pavers, rollers and various trucks. Gravel and hot mix pavement are among the required materials.

Traffic during construction hours has been delayed slightly, as there has been alternating one-way traffic during those periods. During the day time/non-construction times, traffic has had to slow down as the pavement has been removed in short stretches along the route, forcing vehicles to travel on gravel surfaces.

Paving operations will follow after the concrete slabs are removed, and new subbase has been placed and graded to meet the required cross slopes. The pavement will be placed in 2, 3-1/2 in. lifts of Type IIS Superpave for the base/intermediate course, and a final, third 1-3/4in. lift of Type IIIS Superpave as the wearing course.

The concrete slab removal will take place after most or all of the surface pavement has been milled off. The concrete slabs, which have been estimated to be roughly 7-1/2 in. thick; 10 ft. wide; and 20 ft. long, will then be fully excavated and removed from the site. The remaining void will then be filled with new subbase, which will be graded to specified cross slopes in preparation for the paving operations.

Drainage work has been mostly limited to the replacement of some of the existing cross culverts along the corridor. The project also calls for installing new runs of underdrain to help move water away from the road structure. Drainage work was started early in the construction process to allow for settling of the above materials, before the final lift of pavement is placed. The contractor has completed the vast majority of the drainage work at this time. Drainage not replaced will be inspected and cleaned out where required.

Bogaczyk also said working with Waterbury and Stowe officials has been a positive experience.

“Both towns are aware of the need for this rehabilitation, and have been extremely supportive in getting information to the public and providing information to VTrans regarding town-owned infrastructure and local events with large traffic influxes.”