Heavy and marine construction specialists Murray Logan Construction is holding a virtual "clinic" on best practices for dredging and recycling of materials removed from a complete rebuild job site in Palm Beach, Fla. The project is under way on the Lake Worth Lagoon/Intracoastal Waterway, just adjacent to South Lake Drive. 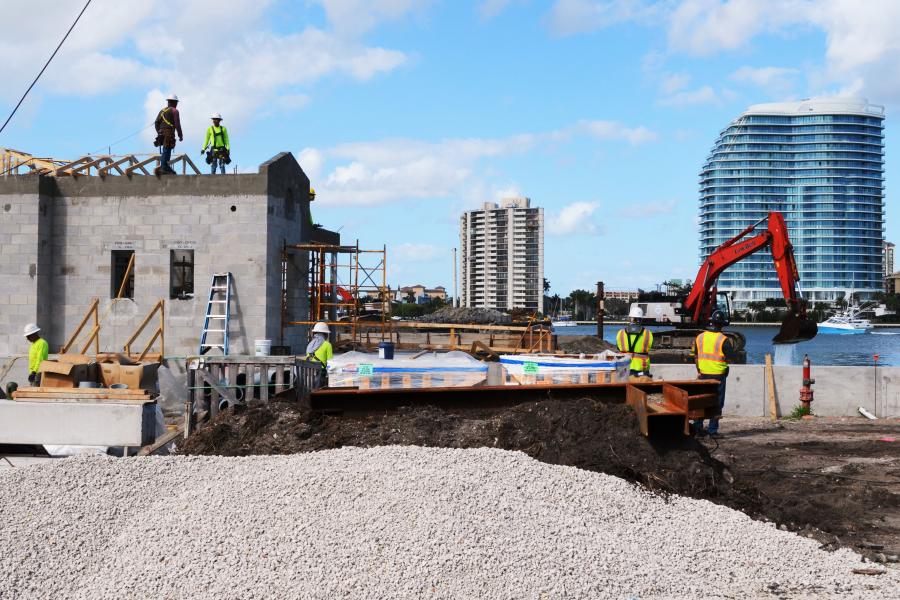 Andy Logan of Murray Logan Construction, based in West Palm Beach, Fla., stated that his company currently is working on construction of the second of three structures to replace aged marina buildings. The three buildings will provide police and dock master headquarters, as well as support for all marina activities. Two of the new buildings are being constructed with an "over water" footprint.

Other major reconstruction includes building of four docks, with single docks at the north end, and three with piers, which were the first ones to undergo construction and are almost complete.

"We have five barges that are active in this construction," Logan said. "Over 90,000 yards of underwater material is being removed from this site, comprised of about 85 percent rock and 15 percent sand.

"We're loading the material to be removed onto barges and barging one mile south to another site — Tarpon Cove — where we're making islands for Palm Beach County. We're reusing and recycling everything."

The existing aging docks that were removed were put on barges and moved offshore for use in an artificial reef program. This included a couple million pounds of concrete that was removed from the site and barged out and placed offshore in 40 ft. of water.

Completion has already taken place for removal of two concrete buildings and three big docks with 25-ft. pilings, which were removed, cut up with wire saws, pulled out with cranes, stacked on barges and taken offshore.

The overall project started in May of 2020 and the town of Palm Beach is expecting completion by November of 2021.

In addition to a police station and dock master headquarters, this rebuild will serve for a deeper more efficient facility for docking of 84 yachts ranging in size from 60-ft. up to 294-ft. vessels serviced by a full-fledged marina. The previous marina facility had been very active and all of the boats had to be moved for rebuilding the existing dock, buildings and parking lots. Essentially, Murray Logan is completely demoing everything and building completely new.

Logan stated that the main purpose of the rebuild is to update the marina while increasing the depth to accommodate bigger boats.

"There were already some big boats in the previous marina, but after our work, the chances for bottoming out of the big boats is very slim." 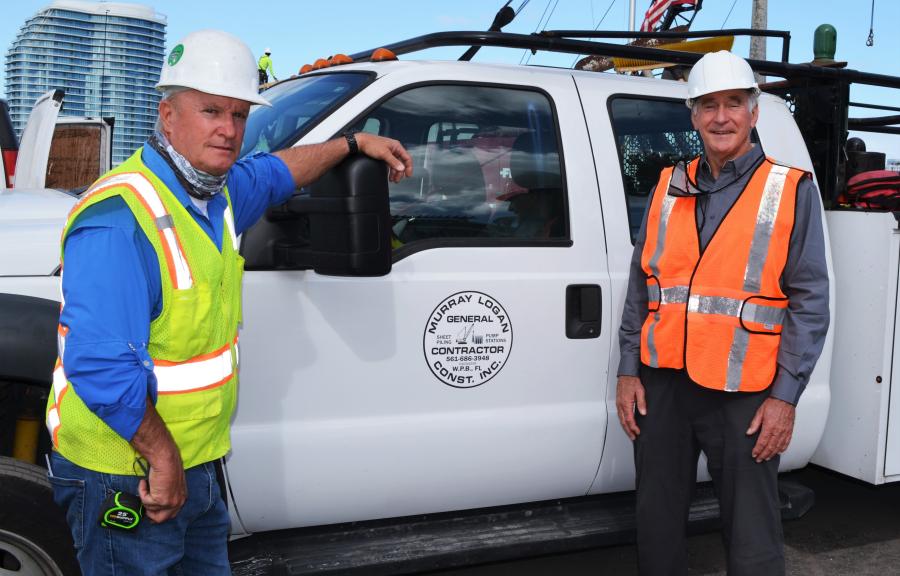 At the heart of the dredging work, Murray Logan Construction found that a pair of new Link-Belt 490x4 excavators purchased specifically for this job from GSE were best suited for this particular job site. The machines are working six days a week, 10 to 12 hours a day. The company had purchased other Link-Belt excavators from GSE in the past and felt this duo was best suited for the work at hand.

The challenge of this particular site is that the underwater rock is so hard. That's why Murray Logan brought in two machines for non-stop digging and so many barges for transferring rock to the island project.

"We're switching buckets back and forth from a smaller to a larger bucket and go through a lot of bucket teeth because the rock is so hard. The machines themselves are absolutely perfect with no problems. They're a good match for the barges we're using and very good for the height off the water, inclusive of the barge deck height from the surface of the water where the excavators are working.

"The rock is really tough on bucket teeth. We've gone through 12 sets and counting on each excavator. Breaking off the solid sandstone is much more challenging under water than if you were on dry land. Also, being on a barge, you're only using about 60 percent of the trackhoe capabilities because you're continuously moving on the water. It's like pile driving on water versus land. The process is much quicker on land," Logan said.

Production averages about 180 to 200 yds. of rock pulled up by each excavator per day and in softer material production totals go as high as 290 to 300 yds. when in the right material.

For the pair of Link-Belt excavators, Logan is one of the daily operators.

"It's a tough environment when you can't see your bucket and you're digging solid rock," he said.

Logan stated that his company believes the Link-Belt trackhoes are the best machines for their money and the service they get from their distributor, GSE, is outstanding.

Service work for these machines is performed right on the barge. The Murray Logan Construction maintenance team comes out with all the materials needed, hop on a skiff, get to the barged machine at the exact hour meter timing for regular maintenance, and do the work. The machines never come off of the barge.

The only time Murray Logan needed its GSE field service representative was when one excavator had a minor cylinder leak. The machine was brought to the shore, the cylinder replaced and the machine was up and running the next day. 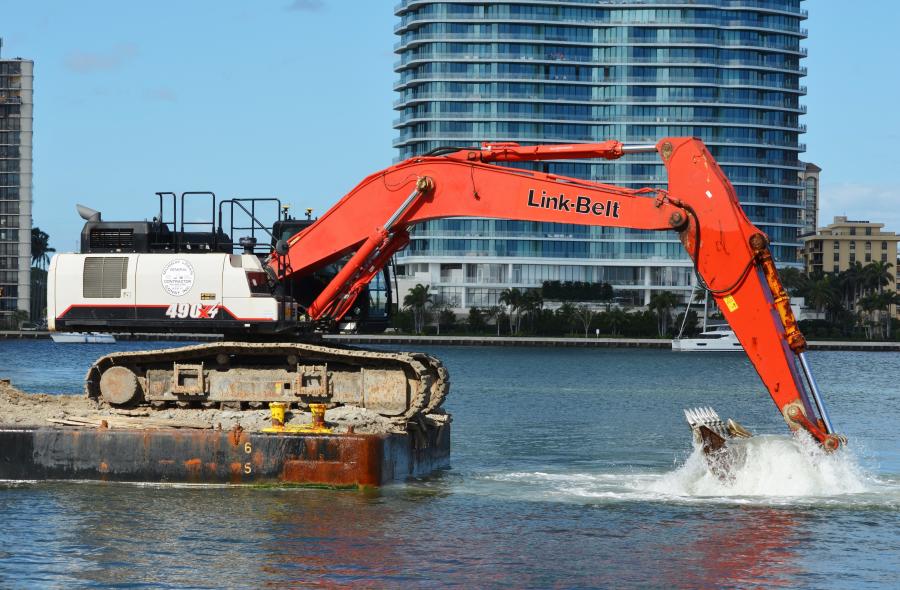 So how exactly does a contractor know where to dig when the bucket is underwater? Simple answer, a "dialed in" GPS system.

For the excavators working from barges, a monitor screen in each machine shows exactly how deep to go with a visible grade line. The system is set up to show exactly where the teeth are and everywhere the bucket touches, so the operator never has to dig something twice. The base unit is near the job trailer and shows exact dig depth in any given area.

"We just purchased another system to utilize at the island job site to help us to be perfect on everything there too. The system is on both Link-Belt 490s and really works," Logan said.

"We're undercutting a foot more than needed to ensure the job is complete and to make sure we don't have to come back and rework this site, and there's never an issue of being deep enough."

For the underwater hard rock that needs to be "punched into" Murray Logan is using heavy duty Werk Brau 3-yd. rock buckets with single point Tiger teeth, specially purchased and set up for this job. They started out with fork teeth, but found the single point have proven to work much better on these buckets. Single point teeth means less touch on the ground for the hard rock and more punch. There were no modifications needed on the machines, and both excavators actually still look brand new now, according to the company.