The Tacoma Narrows Bridge became famous as ‘the most dramatic failure in bridge engineering history.' 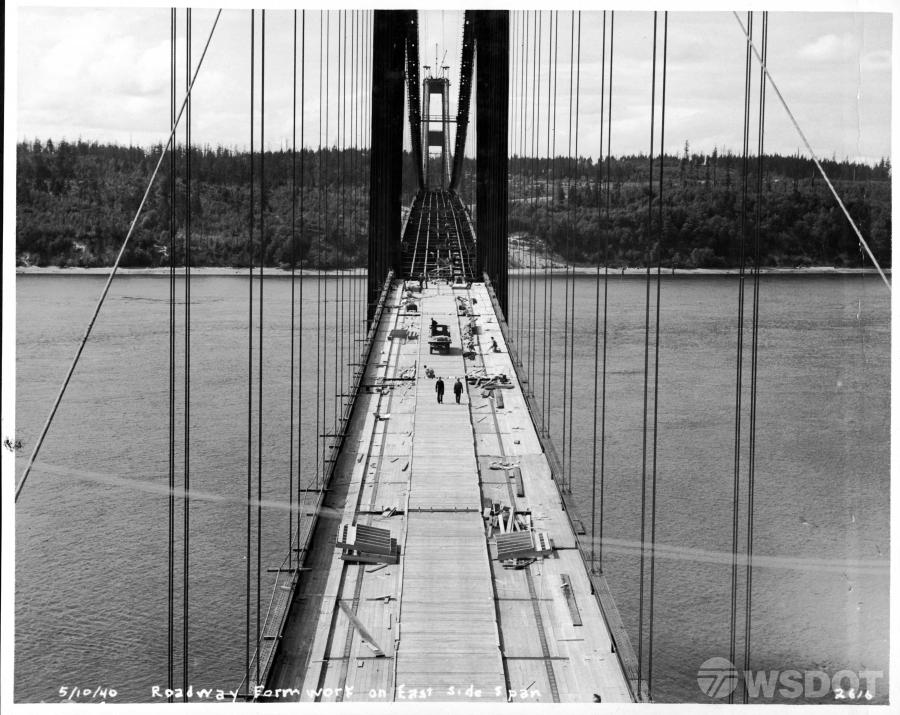 WSDOT photo. Construction is under way on the 1940 Tacoma Narrows Bridge. Taken May 10, 1940, this photo shows roadway from the east side of the span.

In Tacoma, July 1, 1940 was a day of celebration as a crowd estimated to number 7,000 gathered for the opening of the Tacoma Narrows Bridge, a suspension bridge with a main span measuring 2,800 ft. (853 m) over the Puget Sound. It was the third largest in the world, coming in after San Francisco's Golden Gate Bridge at 4,200 ft. (1,280 m), and New York City's George Washington Bridge at 3,500 ft. (1,066.8 m). But four months later, Nov. 7 became a day that would live on in infamy, as the bridge, dubbed “Galloping Gertie” collapsed during a windstorm.

“The bridge became famous as 'the most dramatic failure in bridge engineering history,'” according to the Washington Department of Transportation's website.

“Now, it's also “one of the world's largest man-made reefs.”

The sunken remains of Galloping Gertie were placed on the National Register of Historic Places in 1992 to protect her from salvagers.”

The bridge may have been a dramatic failure, but it also has since significantly helped shape the way we build suspension bridges, making them safer for everyone.

“A suspension bridge has many major components. The bridge deck and stiffening superstructure has to resist its own mass and any transient loads. All of that mass is supported by some kind of cable system. The Tacoma Narrows Bridge was an example of trying to minimize the weight with a cross sectional shape. Prior to the Tacoma Narrows, there were only a couple of examples where they didn't use trusses. The original suspension bridges were all framed with deep open stiffening trusses. For the Tacoma Narrows Bridge, they elected to frame with plate girders — girders on the edge of the roadway. That configuration is torsionally less stiff than a stiffening truss would have been.”

The second instability in the bridge was vortex shedding — the vertical rising of the bridge deck — which occurred on the Tacoma Narrows Bridge even in mild winds, earning its nickname of Galloping Gertie. It is normal for a suspension bridge to move in the wind, but the Narrows Bridge was “different.”

“The roadway sometimes 'bounced' or 'rippled' in a wind of 3 or 4 miles per hour,” according to the WSDOT website. “Often, several waves of 2 to 3 feet [and on a few occasions up to 5 feet] would move from one end of the center span to the other. There seemed to be no correlation between the wind speed and the size of the waves. Sometimes the span would “bounce” for a few moments then stop. Other times, the waves lasted for six or even eight hours.

“Thrill-seekers drove to the Narrows from miles around when the ripples started. Some motorists became 'seasick' and avoided using the bridge. But, for adventurous spirits the bridge became an amusement ride. Drivers crossing the span at times saw a car in front of them suddenly disappear into the trough of a wave. Moments later it reappeared as the roadway rose. According to one report, a couple of times drivers experienced waves 10 feet high.”

Neither torsional flutter or vortex shedding were studied in the days when the bridge was built.

“These phenomena weren't prevalent on other previous suspension bridges,” said Moore. “Those big suspension trusses quelled that motion. Subsequent to the collapse there is now a bridge aerodynamic evaluation done on cable-supported bridges. It's a common exercise done for any cable-supported bridge around the world. They evaluate those two aerodynamic instabilities. “We put the bridge cross section in a wind tunnel and evaluate its inability to twist or rotate and ultimately fail. If it doesn't exhibit this pattern of deformation, which is consistent with the term flutter, we have a safe design. It can't show any sign of flutter. That whole process of evaluation didn't exist in 1940. The contribution of the collapse in 1940 was the creation of this field of engineering. It's truly unique to suspension and cable-stay bridges.”

“Galloping Gertie” wasn't the only bridge to exhibit the instability and two bridges, the Bronx Whitestone in New York City and the Deer Isle in Maine, had to be retrofitted.

“The newest Tacoma Narrows Bridge opened to traffic in the early morning hours of July 16, 2007. The day before, on July 15, 2007, 60,000 visitors joined WSDOT, elected officials and others to celebrate its completion. Nowhere else had a parallel suspension bridge been built so close to an existing suspension bridge, and it was all accomplished in the challenging tidal, windy Narrows environment. No workers lost their lives during construction of this amazing engineering feat.”