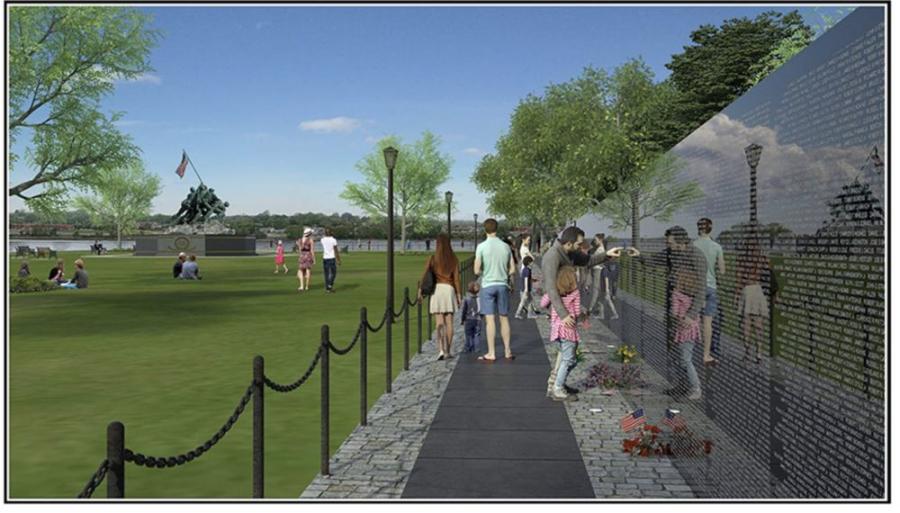 Scheduled to be completed before Veterans Day on Nov. 11, 2020, the wall will be located in Fall River’s Veterans’ Memorial Bicentennial Park, where an Iwo Jima monument that honors World War II veterans, a Korean War memorial and a Gold Star Families Memorial are located.

A Vietnam Veterans Memorial Wall that'll be 80 percent of the size of the original memorial wall that opened in Washington, D.C., in 1982 is being built in Fall River, Mass.

Scheduled to be completed before Veterans Day on Nov. 11, 2020, the wall will be located in Fall River's Veterans' Memorial Bicentennial Park, where an Iwo Jima monument that honors World War II veterans, a Korean War memorial and a Gold Star Families Memorial are located.

The Vietnam Veterans Memorial Wall will feature panels that commemorate the 58,318 American soldiers who died in Vietnam from 1955 to 1975 — 1,250 Massachusetts residents died in the Vietnam War, 21 from Fall River. 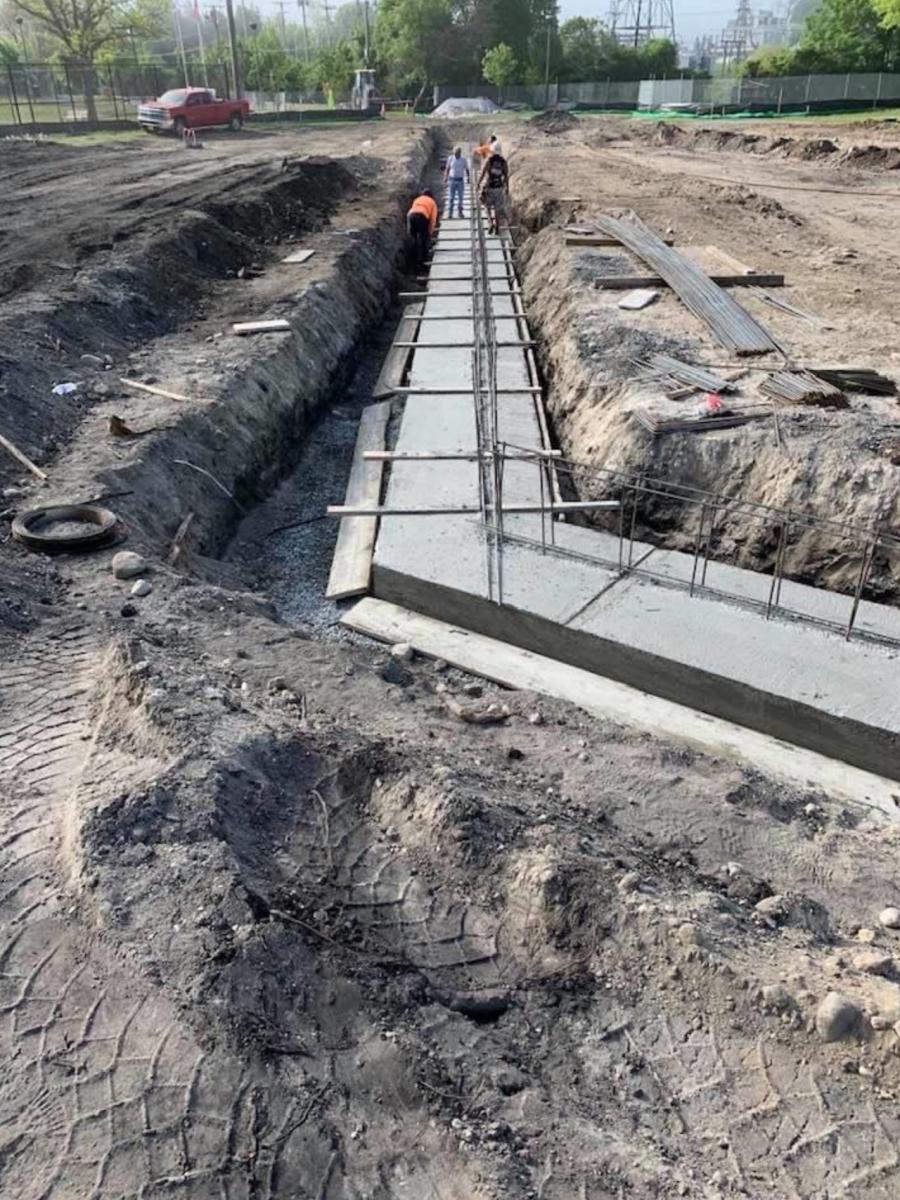 The names of the veterans are posted on 144 panels that are 30 in. wide and placed in 9-ft. tall rows that hang on a concrete wall.

The panels were engraved by American Veterans Traveling Tribute (AVTT) of Bullard, Texas, a company that was founded in 1998 and built its first memorial wall in 2007, according to CEO Don Allen. "We take marine quality aluminum, cut it to size and engrave the names on each panel," he said.

The aluminum panels, which are secured on an aluminum frame, are installed to the concrete backup wall with a series of shelf angles at various heights to align with the sloped panels, according to Rodney Jacques, executive vice president of William Starck Architects, the Fall River, Mass., design and project management firm on the job.

The construction of the wall, which will be 180 ft. long and 9 ft. tall, began in early May with JRD of Assonet, Mass., the lead contractor.

Rod Rezendes, JRD's president, said the wall was recently stripped and concrete poured with lighting to be installed in the next stage of the project. S&S Concrete of Swansea, Mass. did the formwork, rebar and concrete work. Bishop Electric of Assonet, Mass., is doing the electrical work on the job. DaSilva Landscape & Construction of Fall River will do the landscaping.

JRD is waiting for granite to be delivered from J&J Materials of Middletown, R.I., with a delay Rezendes attributed to the coronavirus pandemic.

"It pushed the project back eight to 10 weeks, but we'll be able to install the panels before the granite arrives and we'll prep the wall for landscaping and irrigation when it is delivered," he said.

The equipment JRD is using on the job includes a Caterpillar 335 excavator, a John Deere 410 backhoe and Weber compactors, Rezendes said.

The budget for the job is $1.4 million, with $600,000 donated by the state through the Gateway City Parks Program and the Department of Veterans' Services and $300,000 from the city of Fall River. The rest came from funds raised by the Vietnam Veterans Memorial Wall Committee, which is overseeing the project.

"We did comedy nights and car shows that helped us out," said Joe Marshall, the committee president, who served with U.S. Air Force security in Vietnam. "This is an exclusive wall with no other that can be built within 50 miles of Fall River, which covers all of Massachusetts and parts of Rhode Island and Connecticut."

A contract signed with AVTT guarantees it won't build another memorial wall within 50 mi. of Fall River, Allen said. 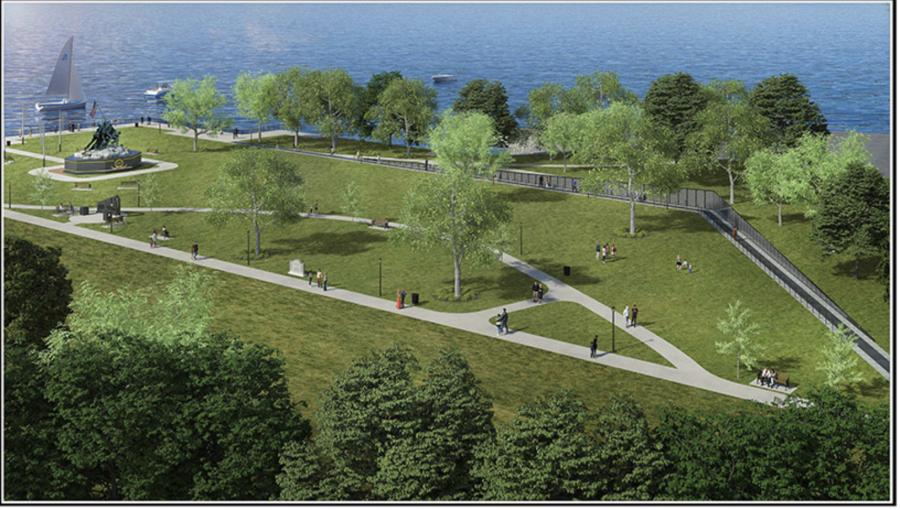 The goal of the wall in Fall River is to mimic the original wall in Washington in a place where it will be cherished.

"We want ours to be closer to Washington than the others," Marshall said. "And ours is on the waterfront at Veterans Park with three other monuments so there are not many other places you could put it."

The wall may also be the next stage of an ongoing Vietnam memorial project in Fall River.

"There is already talk of a second phase and constructing an outer building for memorabilia," Marshall added. "And the park can also be used as a meeting place for dignitaries, guests and families from around the world."

Materials, wall details and other site elements were designed with the original wall's as-built drawings from the Washington memorial to be a close match, according to Jacques.

A groundbreaking ceremony for the Vietnam Veterans Memorial Wall in Fall River that took place at Veterans Memorial Bicentennial Park on July 2, 2019, was attended by Gov. Charlie Baker and Lt. Gov. Karyn Polito. "This is a fitting tribute to the men and women who served and died in Vietnam, but more importantly this is the right place for it and I give the people in Fall River tremendous credit for making it happen," Baker said.

The memorial "will stand as a testament so that no person in our community, in our commonwealth or in our country forgets the sacrifices that were made by the 58,000-plus individuals who lost their lives in Vietnam," former Fall River mayor Jasiel Correia said.