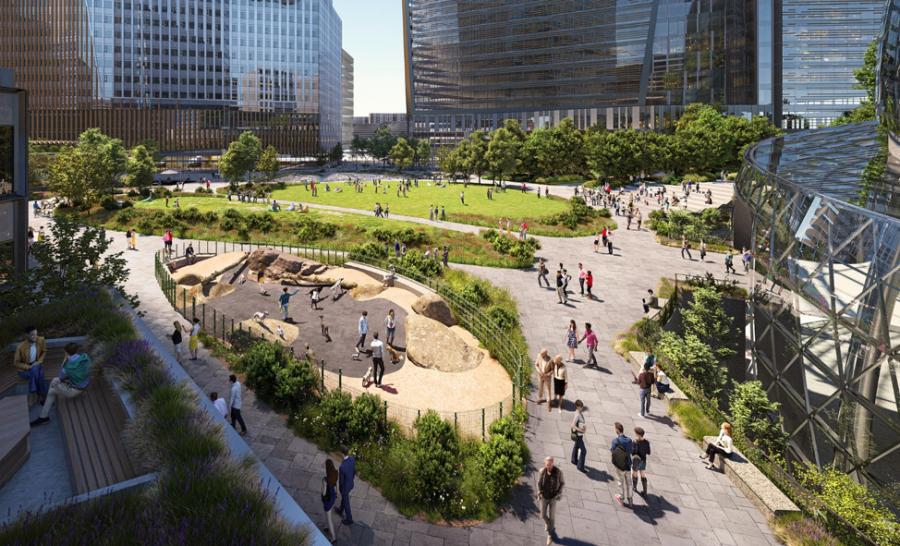 The Amazon HQ2 site in Arlington, Va., will include ample local vegetation and broad walkways — even a dog park.

Construction on the first phase of Amazon's HQ2 in Pentagon City, Va., has reached a new milestone, as crews have begun revamping the adjacent green space.

Work on the office complex, located at the corner of 13th Street South and South Eads Street, remains on schedule, according to an Amazon spokesperson. The site is comprised of two, 22-story office buildings dubbed Met Park 6 and Met Park 7/8, in addition to the forthcoming park area.

Clark Construction Group, located in nearby Bethesda, Md., is managing the development, and officially got started on the green space — also named Metropolitan Park — at the end of October, according to an email the company sent to ARLnow, an Arlington news source.

Fencing around the site has been expanded to surround the existing park to maintain public safety during this work.

"We anticipate excavation activities will begin in the park area in mid-November," Clark Construction said in its email.

The new $14 million park will feature more than two acres of public open space, including signature landscapes such as a forest walk, an edible garden and children's play garden, as well as a dedicated dog run and community tables.

"Crews will excavate the existing park, removing 10,000 cubic yards of soil over the next several months," explained Jeff King, Clark's vice president of construction, in a video update.

The work will move from the edge abutting South Fair Street to the edge bordering the planned office buildings, he said. This winter, crews will install drainage and irrigation systems and haul in new dirt to support the future park's varied topography and vegetation.

"Our construction schedules time with planting seasons, with the first planting set to take place in spring 2022," King said.

The old park was primarily used as a place for dogs to run around and play, so for canine owners nearby, the loss of the green space means frequenting other local parks, ARLnow noted.

"I know many of our neighbors use the park space daily," King said. "We recognize that the shared community asset provides the space to walk your dogs, enjoy the outdoors and socialize."

King said the efforts were to ensure "it's a great place and a respite for outdoor activities and community gatherings while [Metropolitan Park] is under construction."

Meanwhile, Clark's building crews are completing one floor of the two Amazon office buildings about every week and a half, King said.

"Our crews have made significant progress on the site," he noted. "We anticipate topping [out] both 22-story office buildings in spring of 2022."

Installation of the building's façade will continue over the next 12 months, King told ARLnow. Inside, workers are installing electrical and mechanical systems, sprinklers and drywall.