Vulcan Materials is the nation's largest producer of construction aggregates and is already providing recycled products in other states. 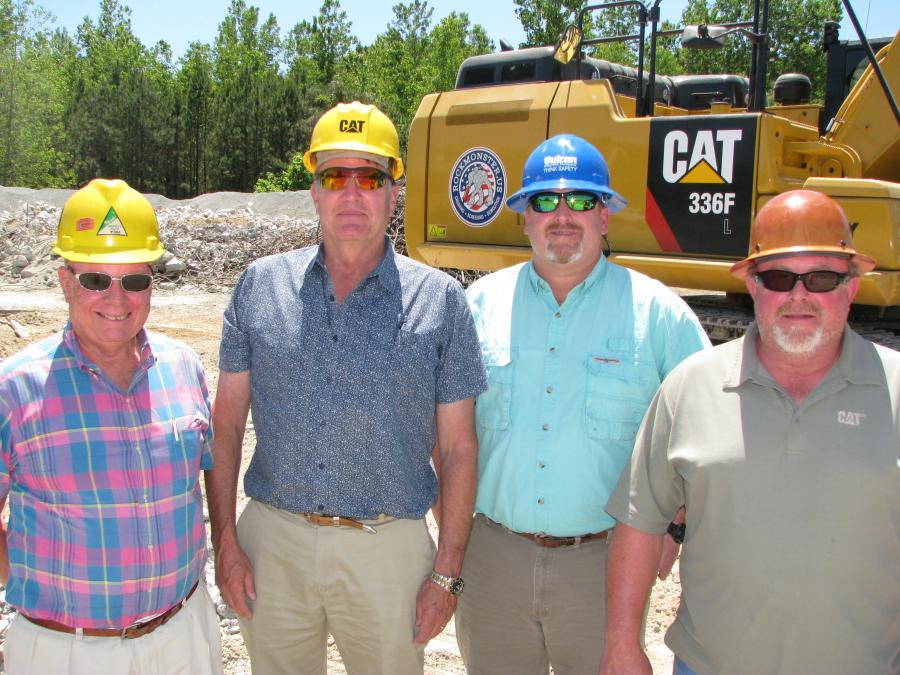 Being an environmentally friendly corporate leader seems to be a goal or maybe even simply a “catch phrase” for the overall efforts of a lot of companies doing business in the United States Vulcan Material Company is taking its environmental responsibility to a new level in Georgia and has set up a new division at its Norcross, Georgia quarry: Vulcan Recycle.

Vulcan Materials is the nation's largest producer of construction aggregates and is already providing recycled products in other states. Now it is making the similar investment in the state of Georgia. It's a rather simple concept in which a product is reprocessed and sold again. Construction aggregate material is a product that is sold for construction projects. Once a structure has outlived its useful timeframe, it's torn down and hopefully recycled — and reused again. Shawn Greenway, Vulcan Materials Norcross, Ga., plant manager said, “In an effort to continue to be an environmentally responsible aggregate producer, we're now recycling and re-selling the product again as a recycled product. ”

Greenway has been in the aggregates industry for more than 25 years and said that even though Vulcan Recycle is a part of Vulcan Materials, it operates independently. “It's something that is done at other quarries in other states, but this is our first recycling plant for the state of Georgia and something new and exciting for us.”

When setting up the new recycling division, Greenway and his company were faced with the daunting question of doing this “in house” or subcontracting it out. He said that when you start out in a new direction like this, we found it to be best to choose a subcontractor who already knows how to do this and processing recyclables. “It is what they do for a living.”

Vulcan Materials looked at various contractors to do this work, and found the reputation and the production of the work of Mike Turner and his company, Rockmonster.us, based in Cartersville, Ga., to be the best fit. “Mike [Turner] gave me quotes on what his company could do for us and for costs to crush and handle the material. I went over the proposal with my boss, Corey Johnson, and we agreed that Rockmonster.us would be our subcontractor on this project.”

Before starting Vulcan Recycle, Greenway said, “We actually already had customers that wanted us to recycle their product and had customers who actually asked us for recycled product to buy. Since we were doing this at Vulcan locations in other states, we decided it was time to deliver on what our customers were requesting.”

“Our thought process in the initial stages is to allow an unlimited amount of material to be recycled to come into the operation. Turner can convert the recyclables into a usable product quickly and we feel that we can handle any volume that comes our way,” added Greenway.

Currently, virtually all aggregate materials needed for construction and roadways is already being produced at this quarry, including crusher run, 4's, 5's, 6's, 7's, 89's, 57's, 67's 56's, manufactured sand, rip-rap, m10's, 810's, masonry sand, and virtually anything a contractor would need. The Norcross plant has been in operation since 1956 and has become Vulcan's largest plant in Georgia.

Recovered concrete material that comes in to Vulcan Recycle is 100 percent recycled, even concrete with steel and rebar. When the recovered concrete product comes in, rebar and steel is separated out and trucked out to another recycler. The remaining concrete is crushed, screened and stockpiled. Vulcan sells this end product as a good alternative product of recycled base or recycled 3's and 4's.

Greenway said, “Our customer's, especially inside the perimeter [inside I-285 perimeter around Atlanta] have the availability to add into their contracts that they are utilizing recycled products. Not necessarily for the green credits, but to prove they are proactive in utilizing environmentally friendly recycled materials available to them.”

“Otherwise, all of this product that we are recycling is going straight to the landfill, and the landfills are eventually going to fill up. We're just being proactive in taking a product that our customer can re-use. We're simply helping our customer to reuse a product that was already been used and is environmentally responsible. It's very well possible that many future project contracts will require a certain percentage of recycled product be used in construction,” added Greenway.

The Vulcan Norcross quarry started receiving concrete material to be recycled the first week of January, 2017. Stockpiles of recovered material started to accumulate and the Vulcan aggregate sales staff started to promote the new recycled products to their customers. It was at this time, around mid March, that Mike Turner moved his mobile equipment in to start crushing and producing the new recycled product.

When asked about Vulcan as an environmentally conscious company to work for, Greenway stated, ” We use all recycled water in our Norcross quarry operations. It's a great company to work for and is pretty much just a big family. For me, it's virtually like being a kid playing in a sandbox. At Vulcan, we try to do everything the right way-at the right time. We're constantly checking our quality control programs. Our quality assurance program is of huge importance and is what makes us extremely customer friendly. At this quarry, we're over 600 feet deep and we're still mining the same high quality of rock that was being mined over 50 years ago at the top of the ground.”

Rockmonster.us and the Subcontracted Recycling Process at Vulcan Recyle

The overall process of contract recycling at Vulcan Recycle is done by Mike Turner owner of Rockmonster.us, based in Cartersville, Ga. Rockmonster.us is a “spin off company” of Graham and Turner and has been a separate successful entity for more than three years. They relocated their machines to the Vulcan Norcross, Ga., plant at the end of March 2017. The parent company, Graham and Turner, continues to be engaged in four or five projects running at the same time for grading and pipeline work. The original start of the crushing operation, came from a need for being able to recycle product on site and reuse without trucking in, or trucking out. Rockmonster.us is simply providing contract crushing for Vulcan, and then Vulcan resells the product.

Turner said that when the material comes to the Vulcan site, we separate into two piles. “Clean” concrete material (meaning no metal or rebar) in one pile, and concrete material that needs to be cleaned in another. The removal of metal and rebar is accomplished through the use of a Geith mechanical pulverizer used on the Cat 345CL and then the metal is removed from the concrete pile and stockpiled in another pile through use of a Geith magnet. A Cat MP20 shear, a concrete processor, and a Kent hydraulic hammer (whichever is needed at the time) are all used interchangeably on a Cat 329 excavator for cutting up and processing and providing “clean” material for running through the mobile crushing plant. The goal is to get concrete clear of all metals and to have each piece in 2 by 2 ft. sections or smaller for best use of the crusher. Any remaining metal is magnetically pulled from the crushed material during the crushing operation. It's all Powerscreen products for the crushing operation. At the heart of the mobilized system is a Powerscreen 300 mobile crusher with Warrior 800 mobile screening plant, and two 75 ft. mobile conveyors. All of which are loaded by a brand new Cat 336F excavator.

Output of this crushing operation is dependent on demand, but currently is running at around 2,000 to 2,900 tons per day. It takes some time to prep the material to be ready for loading into the crushing plant. Interesting note, Rockmonster.us keeps close tabs on the place of origin of all the materials coming in to be recycled. Why? Much of the material coming in is from high profile or historic demolition projects in which Rockmonster.us is now becoming the final company to touch the material and recycling it and “putting back into circulation.” At the time of this story, material that was being recycled came from an imploded bank structure in the Sandy Springs/Dunwoody, Ga., area.

As with the staff at Vulcan, Mike Turner also gives high marks to the Cat machines and the representatives from Yancey Bros. Co. He has been working with John Gorham and John McLean for more than 20 years on his purchases, and has a predominate fleet of Caterpillar machines. He does his own regular machine service and utilizes Yancey on warranty issues. The operators on his machines actually are well trained in service work.

When asked about setting up recycling operations at Vulcan, Turner said, “Bringing my machines onto the site and getting started was rather easy. Vulcan had the spot already prepped and ready to go. They were very accommodating for set up and getting started. I've been buying material from Vulcan since I started in business and it's been a good relationship and I already knew their operations quite well. This is the only crushing operation I have working right now. If I'm caught up on crushing at the Vulcan site, I can actually mobilize my crushing machines to another site for a period of time and then bring them right back when needed.”

The Powerscreen crushing/screening/conveyor plant is completely mobile and can be moved in only four truckloads. “Fold it up and go” to the next project. Set up at this site only required a half day. Turner said his Cat machines and Powerscreen products have been working well. Prior to relocating his equipment, the Powerscreen machines had done a great job on projects in Doraville, Ga., and Cobb County, Ga.

Turner concluded by saying, “At this operation, once the recycled product is off the belts, it belongs to Vulcan. It's rather cut and dried. This is the wave of the future. New buildings go up and old buildings come down and are recycled.”