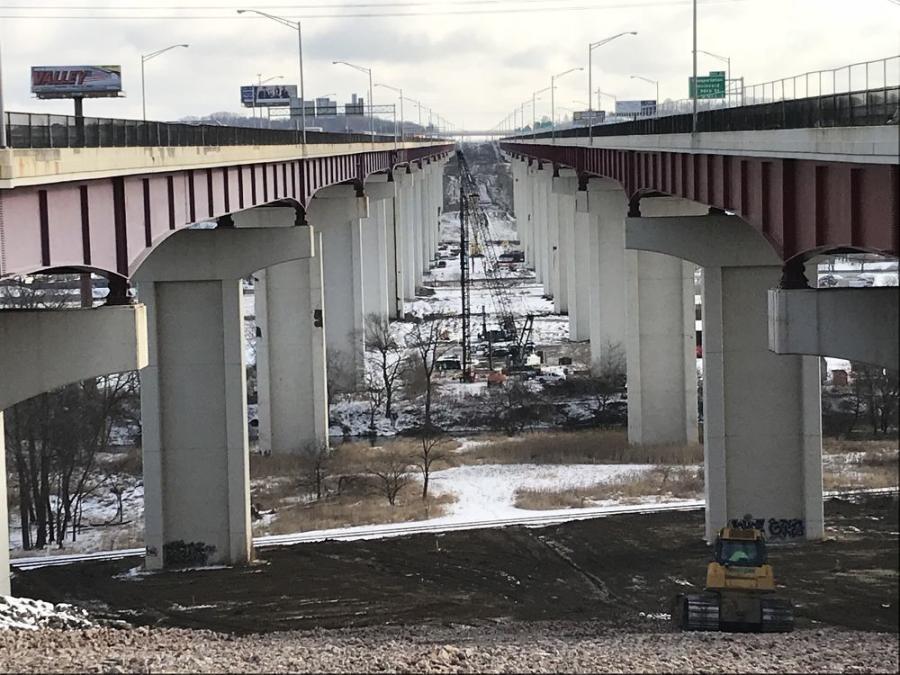 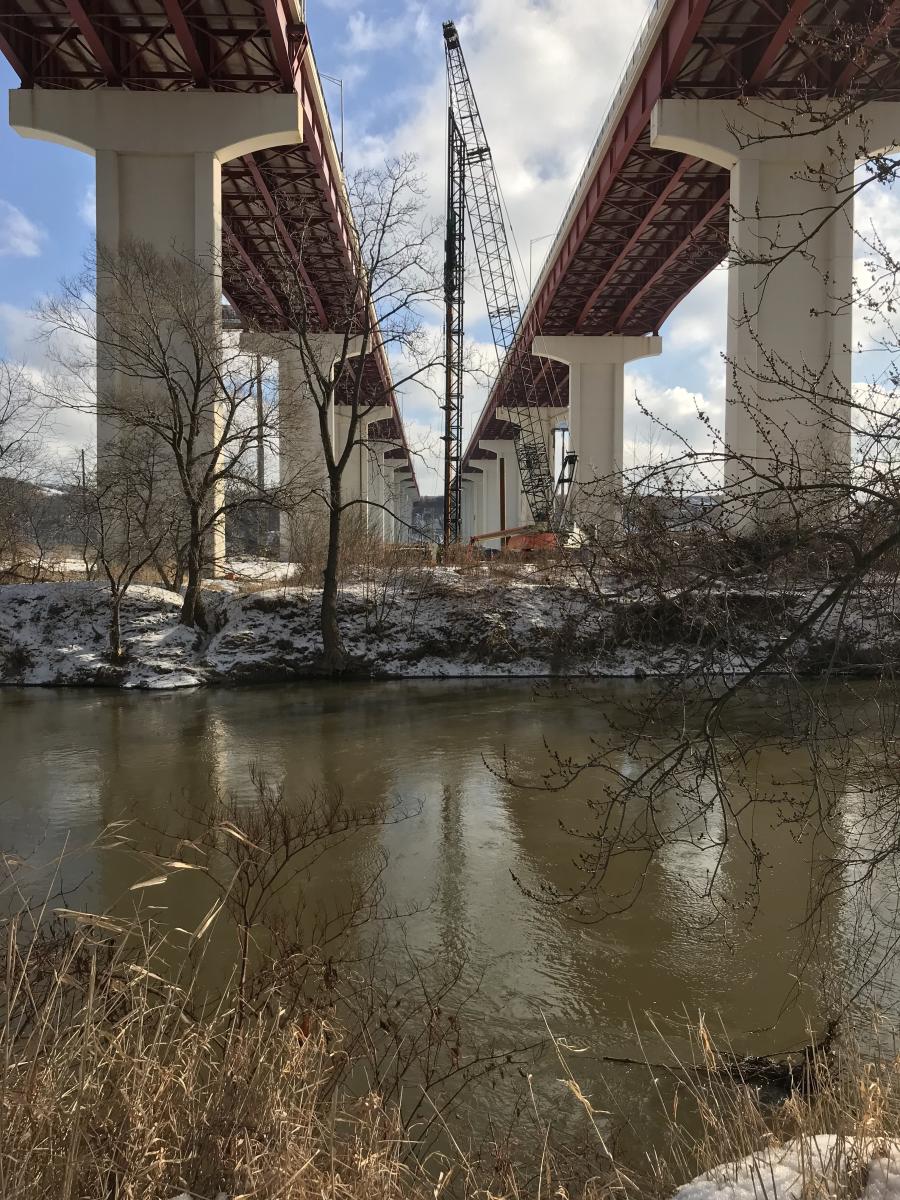 Built in 1975 and opened to traffic in 1977, the steel multi-stringer highway girder bridges are 212 ft. above the river, with the longest span being 300 ft. long. More than 180,000 cars and trucks use the infrastructure daily.

The bridge decks are more than 40 years old and have reached the end of their useful lives, according to an ODOT press release. To maintain the current four-lanes in each direction, a new bridge will be built between the two existing bridges. This major work is expected to begin in spring 2018, however motorists traveling across the bridges won't likely see much of the work as it will take place below the existing bridges.

The re-decking will be completed in fall 2024. The bridges are crucial to the greater Cleveland area's traffic flow, and a key element of the upgrade is dealing with safety issues for motorists.

The planning for the project began in 2011.

“ODOT put a lot of thought and planning into maintaining traffic during this bridge deck replacement project,” said Amanda McFarland, public information officer, ODOT District 12. “Had we reduced existing number of lanes by even just one, we would have created significant daily delays. The idea of adding a bridge between the two existing bridges isn't a new concept. When the bridges were originally designed, one of the plans was to build a bridge between the two. Building the new bridge allows ODOT to maintain the current number of lanes in each direction during construction. When the existing bridge decks are replaced, the new bridge will remain in operation and improve the flow of traffic at the interchange of I-480 and I-77.”

In terms of safety concerns being addressed, an increased parapet and fence height will meet new specifications and in the final lane configuration, the inside merge from I-77 to I-480EB will be eliminated.

In 1999, ODOT had the bridges painted in a red-primer color, replacing the original gray, and in 2011, initiated a $4.4 million project that retrofitted the bridge's parapets, which included the installation of new fences and moving the overhead lighting to an area outside of the structures.

Richland Engineering Ltd. provided the preliminary engineering report used to determine ODOT's final design concept, prepared the design-build scope and are acting as the design review team on behalf of ODOT. CH2M will be the designer of record for the Walsh team. 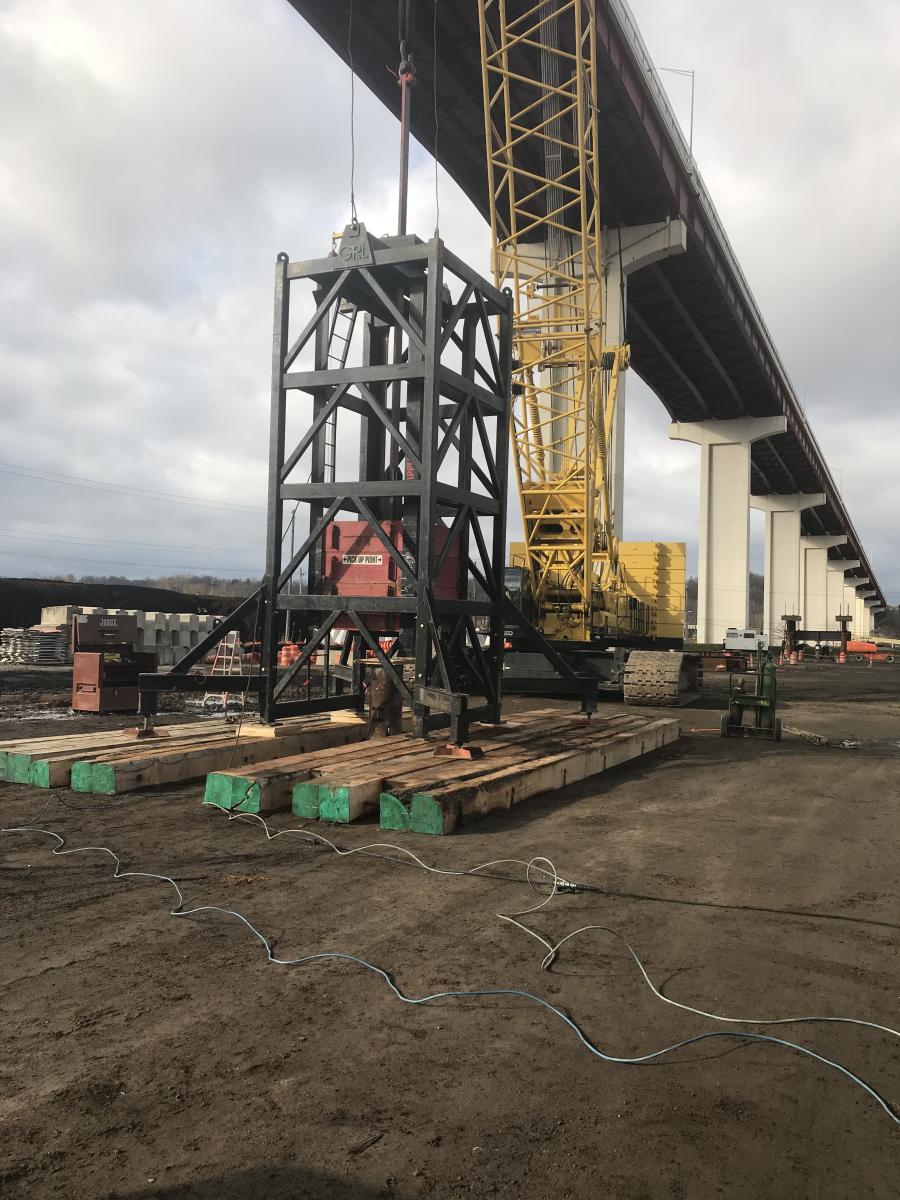 “The major hurdle was trying to maintain eight lanes of traffic during construction, which led to the current plan of building the new structure between the existing structures,” said Michael Herceg, P.E., ODOT's project manager. “The next challenge was to find a way to build a new structure 200 feet above the valley floor without negatively impacting the existing structures. That includes designing and building foundations that do not impact the existing foundations and their piles, and placing new steel girders using gantry cranes without overloading the existing bridge girders. All this will be done without impacting the designated 'No Build' zones under the bridges. Another challenge was access under the bridges west of the Cuyahoga River. A new permanent access road will be built starting at the west abutment.”

“When the existing bridges are re-decked,” said Kirk Gegick, P.E., ODOT project engineer, “light weight concrete will be utilized to reduce the dead load on the existing structures. Parts of the new bridge substructure will use high strength [75 KSI] reinforcing steel in order to reduce the number of bars for constructability reasons.”

All three bridges are designed to handle truck traffic. The lifespan of the bridge decks are 40 to 50 years, and the new bridge should be in the 75 to 100 year range.

The proposed schedule is meticulous. The spring of 2019 will see the start of the steel erection for the new bridge, with all four lanes on both the east and westbound bridges to be shifted to the right to accommodate construction equipment. The traffic will remain in this configuration through the fall of 2020. The spring of 2021 will see all traffic on the eastbound Valley View bridge shifted onto the new bridge as crews start the work to replace that bridge deck, with eastbound motorists still able to exit at Transportation Blvd. in this configuration.

In spring 2022, all traffic on the westbound Valley View bridge will be shifted onto the new bridge as crews will replace that WB deck, with WB motorists able to access I-77 north or southbound in this configuration.

Walsh Construction was awarded the design-build contract last October. Minor operations went into full swing on Dec. 4 based on overnight work that lasted more than eight weeks, which included increasing the height of the existing fence on both bridges by 3 ft. to improve safety.

The goals of the 2018 construction season, which began in January, are: to complete design of the project, to begin construction of the bridge and foundations and substructure, begin fabrication of structural steel and implement the first major mainline traffic shift.

“Variable speed limits will be implemented across the project when workers are present,” said Gegick, “therefore speeds will only be reduced when operations deem it necessary. Walsh has employed a dedicated full time safety officer to educate, train and ensure worker safety.”

The work is expected to take place five or six days a week in 10 to 12 hour shifts.

A suspended work platform will be placed under the bridges to catch all falling debris, and concrete barriers will be used to separate traffic from equipment and workers.

“The railroad property under the bridge is actually owned by the National Park Service but the trains are operated by the Cuyahoga Valley Scenic Railroad,” said Herceg. “ODOT and Walsh have been and will be working closely with both entities.”

The Walsh DBT has created a risk registry to identify potential challenges, which will be maintained throughout the project.

“The baseline schedule to complete the project allows for rescheduling of activities due to unexpected delays without delaying the project completion,” said Gegick.

“This project was originally set up as a design-bid-build for sale in state fiscal year 2020,” said Herceg. “Funding in SFY 2018 became available so the project was changed to design-build to be able to meet the shorter timetable.”

For the 2018 work, the specific challenges are design progress that will ensure steel fabrication initiation, successful completion of the test pile program, and implementation of the first major MOT phase.

The work zone is not considered tight for traffic as 11-ft. lanes will be maintained throughout the project.

“However,” said Gegick, “for the contractor, building a structure between the existing structures created a tight construction environment. All superstructure materials will be delivered in the existing mainline median area. The area is wide enough to accommodate even the largest girders.

“The current plan is to recycle the deck slabs into crushed recycled aggregate,” said Gegick. “The reinforcing steel will be sold for scrap and recycled into other steel products. None of the material will be recycled for use on this project.”

When construction hits full stride, there will be close to 150 workers on site. The subcontractors include Cuyahoga Fence for fencing; Timeline Photography for video field surveys; American Roadway Logistics for maintaining traffic; CH2M Hill for final design; 2LMN Inc. for the field for the survey for the final design; Pro Geotech for soil investigation for the final design; Dot Diamond Core Drilling for concrete sawing; Follow the River Designs LLC for permanent/temporary erosion control; and C&K Industrial Services Inc. for subsurface investigations

This is a major bridge project for ODOT and it will be taking full opportunity of the project to give newer employees a chance to experience all the challenges associated with the poring of new decks, dealing with safety and engineering issues, and coordinating the efforts of general contractors and subcontractors.

“The magnitude of the work involves many public agencies and private utilities,” said Gegick. “Also, the heights involved for all field personnel along with the high traffic volumes. ODOT will employ co-op students for the majority of the project. The DBT shall obtain at least a “Silver” sustainability rating using FHWA INVEST (Infrastructure Voluntary Evaluation Sustainability Tool) program. The scoring/rating shall be as determined by joint DBT/Department scoring workshops. The DBT shall demonstrate a commitment to sustainability and shall provide efforts to maximize the implementation of sustainable practices in all aspects of the project.”

See what else Walsh Construction is up to here.