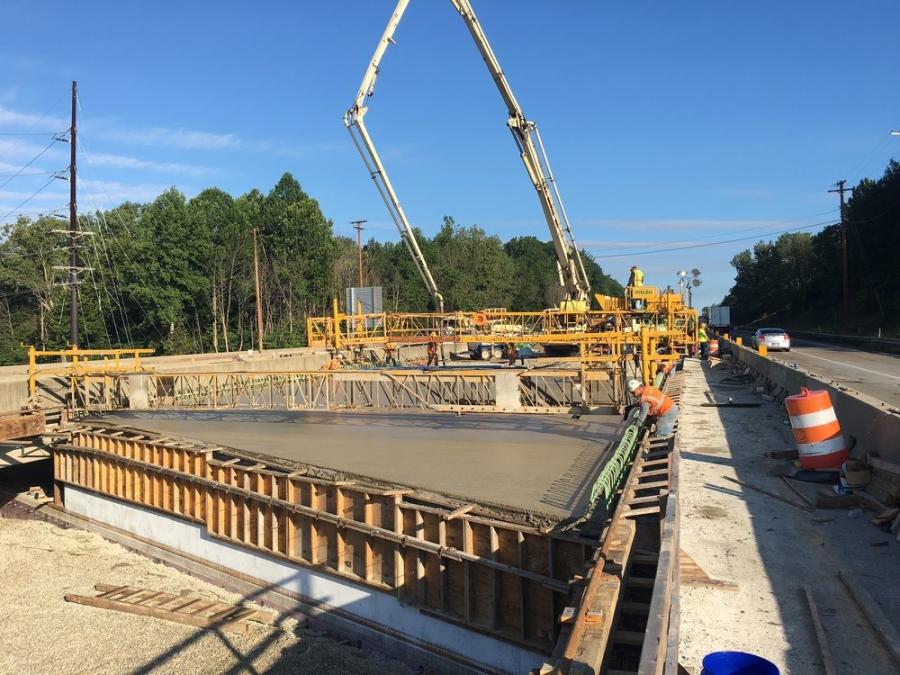 The $5.6 million project was awarded to Walsh Construction Company in 2017.

For the second time in its history, the Indiana Department of Transportation (INDOT) is using a slide-in-bridge method to replace the twin bridges on Interstate 70 (I-70) at State Route 121/New Paris Pike (SR 121) in Wayne County. The $5.6 million project was awarded to Walsh Construction Company in 2017.

The work began last June and should be completed before June 2018. The first bridge slide was successfully executed on Sept. 10. The bridges, located between New Paris and Richmond, were built in 1959, are 131 ft. long and have two lanes in each direction. The new 71 ft. long bridges (single span) will be two lanes and have 10 and 6 ft. shoulders

“After nearly 60 years,” said Nathan Riggs, information director, INDOT East Central District, “the bridges have reached the end of their useful service life and need to be completely replaced.”

The new bridges and road infrastructure were designed by Beam Longest & Neff, with the project being financed by Federal and State funds. Daily traffic on the current bridges is 34,560 cars and trucks daily, which is expected to increase to 36,950 vehicles daily in 2037.

SR 121 may be closed under the I-70 bridges for a maximum of 60 days while SR 121 pavement and the I-70 bridges are rebuilt, according to the project web page. “Specific closure dates will be announced. During the closure of SR 121, highway traffic will be detoured south to U.S. 40 via Indiana Route 227, U.S. 27 and Ohio Route 320.

The first bridge slide and approach pavement tie-in was projected to take 13 days, but Walsh crews were able to complete the process in eight days. The second bridge slide took place on Oct. 13.

INDOT, after lengthy studies, favored a slide-in bridge construction method. For the slide, the new bridge decks are built on temporary supports adjacent to the existing bridge.

Walsh crews are still determining the amount of materials that will be removed with the demolition of the bridges.

The new bridges and roads are expected to use 2,400 cu. yds. of concrete and 80 tons of structural steel. Walsh established a staging area on the east side of the bridges in May 2017, complete with temporary offices, materials storage, and parking for its equipment.

On an average day there are about 10 Walsh and subcontractor personnel on-site. During the first slide, there were about 20 people on site. The subcontractors hired for the project are: Illini Drilled Foundations for 54-in. drilled shafts, Harmon Steel for structural steel erection, rebar, shear stud and stay-in-place formwork installation, Milestone Contractors LP for asphalt paving, Crackers Demo for existing bridge demolition and Roadsafe Traffic Systems for maintenance of traffic.

Equipment is being rented from Herc Rentals in Indianapolis and MacAllister Rentals in Richmond, Indiana.

The company's closest yard/shop is approximately 75 miles away from the work site.