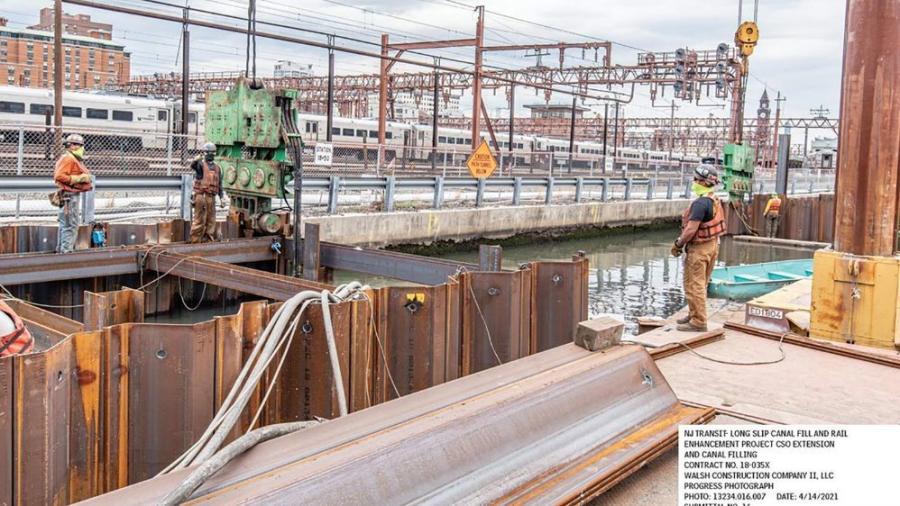 The $40 million contract, awarded to Walsh Construction, is taking place adjacent to the Hudson Bergen Light Rail and the Hoboken Yard, in Jersey City, N.J.

Construction of Phase One of NJ TRANSIT's Long Slip Fill and Rail Enhancement, or "Long Slip," project is making steady progress as crews from Walsh Construction Company are working in an area with active rail operations.

The $40 million contract, awarded to Walsh, is taking place adjacent to the Hudson Bergen Light Rail and the Hoboken Yard, in Jersey City, N.J. When fully completed, the project will allow NJ TRANSIT to operate train service longer leading into, and recover more quickly from, storm events.

"The Hoboken Terminal is one of NJ TRANSIT's major transportation hubs," said Mariluz Garcia-Diaz, senior public information officer, NJ TRANSIT. "The terminal also supports bus and light rail customers, while providing access to PATH trains and ferries to and from New York City. The Hoboken Redevelopment Project is a three-phased approach to address many of the state of good repair and resiliency challenges, which the terminal faces, while at the same time provide opportunities for increasing capacity for rail, bus, light rail and ferry service."

Concurrent to Phase One is the proposed work on Long Slip, which is adjacent to the terminal and alongside the existing Hoboken Yard at the Hudson River Waterfront. The canal, 0.3 mi. long and 100-ft. wide, was formerly used for marine shipping traffic. It has been inactive for more than 40 years.

Long Slip redevelopment will initially address some of the resiliency needs at Hoboken Terminal while providing additional operational flexibility.

The project is broken into two phases: Phase One includes filling of the existing canal with structural fill and surcharging a sewer overflow extension, filling in and leveling of the canal to allow for the construction of a new station.

Phase Two, whose cost has not been finalized and contract has not been awarded yet, will include construction of six new tracks with three ADA-accessible high-level boarding platforms above expected flood levels and a small crew quarters facility on the filled in canal.

"These additional tracks will be constructed above the base flood elevation and provide emergency capacity in the event multiple main track outages are incurred, such as following an extreme weather event," said Garcia-Diaz, "and enable more efficient train operations under normal operating conditions."

When Superstorm Sandy struck New Jersey in late October and early November in 2012, it caused considerable damage to residential and commercial properties, with transportation infrastructure in New Jersey. and New York — tunnels, bridges and rail, infrastructure sustained major impacts, which led to billions of dollars-worth of repairs and reconstruction.

"In 2012, the storm surge from Superstorm Sandy caused the Long Slip Canal to overflow its banks resulting in significant flood damage to both passenger and yard facilities at Hoboken Terminal," said Garcia-Diaz. "Weeks of remedial work followed this event. Several tracks at the terminal were also temporarily out of service, significantly reducing the rail capacity at this vital transit hub."

"The Long Slip Phase One contract award is an example of NJ TRANSIT's commitment to planning and preparing for the future, to ensure that we are capable of moving our customers where they need to be during significant weather events," said NJ Department of Transportation Commissioner and NJ TRANSIT Board Chair Diane Gutierrez-Scaccetti. "Combined with NJ TRANSIT's rapid hiring and equipment purchases, our resilience projects like Long Slip are building a secure and efficient future for our ridership." 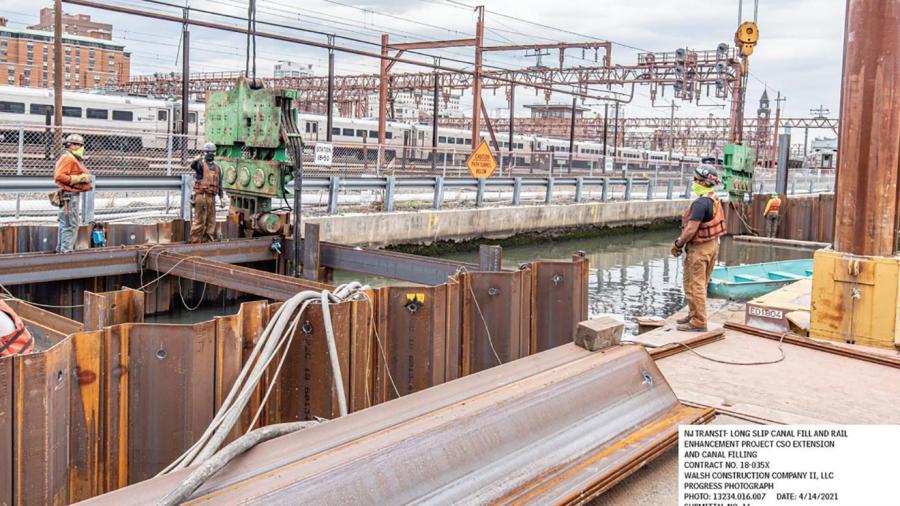 The Long Slip project, which was years in the planning, is much needed. In October 2016, the Federal Transit Administration (FTA) issued a Finding of No Significant Impact (FONSI) following its review of the Supplemental Environmental Assessment (EA) prepared by NJ TRANSIT.

"Superstorm Sandy was a wake-up call in terms of NJ TRANSIT's vulnerability to major weather events, and our Resilience Projects are geared toward reducing our risk and extending our ability to operate during emergencies," said NJ TRANSIT President and CEO Kevin Corbett. "The Long Slip project will reduce the impact of future storms and flooding on our services out of the Hoboken Yard, and this contract with Walsh Construction is a major step toward operational security."

NJ TRANSIT received a Competitive Resilience grant from the FTA for the two-phase project. The agency's board of directors, in March 2019, awarded a $16.5 million contract to STV Inc. for construction management services for both phases of the initiative.

The Long Slip on the Hudson River waterfront is a one-third of a mile, 100-ft. wide canal alongside the tracks at NJ TRANSIT's Hoboken Yards. It was used for shipping traffic, but this ceased more than 40 years ago.

"The storm surge from Superstorm Sandy caused the Long Slip to overflow its banks, resulting in significant flood damage to the yard and weeks of remediation," said Garcia-Diaz. "The project is modifying the Long Slip to eliminate it as a conduit for flood water."

The design and engineering challenges for Phase One were daunting.

"The project created unique design challenges for the engineers," said Garcia-Diaz. "Working in Long Slip created a very unique situation to design plans in a deepwater environment and perform heavy construction in and over three acres of water. The design had to plan for environmental and water quality protection with underwater excavation to avoid silt and soil from leaving the canal and flowing into the Hudson River. The design for the sewer extension also had to address the new sewer work while managing street runoff from over 400 acres that drain to the existing sewer."

"Special barges were transported and assembled to create working platforms for large cranes and excavators over the water and stay free and clear of the active rail yard operations," said Garcia-Diaz. "The first item involved a considerable amount of steel work to permit trench work in very deep clay to prepare the foundation work for the sewer extension. Then as many as 100 concrete trucks would arrive on a regular basis to pour the deep foundations to support the sewer sections as they were installed. Next came the lifting and installation of the 12-ft.-wide concrete sewer sections that weighed 4 tons with concerns that the large booms on the crane to stay clear of active railways and trains."

Busy days have a considerable number of Walsh and subcontractor employees on site, with Walsh bringing in many area subcontractors that have had experience in this type of work.

In The NJ/NY area, Walsh purchases and rents equipment from local and regional dealerships. CEG