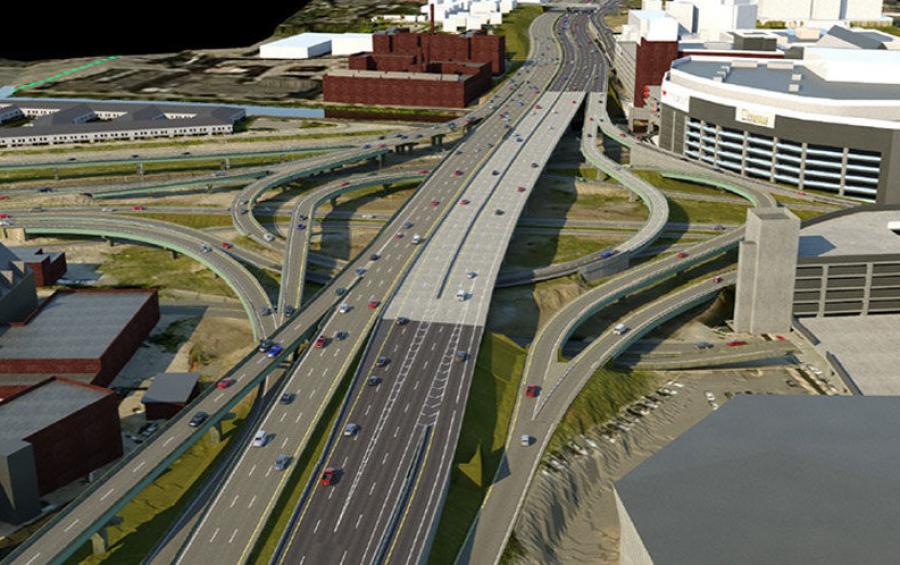 According to RIDOT, the I-95 Northbound Viaduct project’s key element is the replacement of the 1,300-ft.-long structure in downtown Providence. (RIDOT graphic)

With construction season back, the Rhode Island Department of Transportation (RIDOT) has made plans to work on 50 road, bridge and highway projects this year.

Gov. Dan McKee came together with other state leaders in mid-April to celebrate RIDOT's spring return to action at the site of one of Rhode Island's key projects, the $265 million effort to replace Providence's I-95 Northbound Viaduct.

"It's the busiest stretch of highway in Rhode Island with 220,000 vehicles a day traveling over the [structure]," RIDOT Director Peter Alviti told WJAR-TV NBC 10 News.

It's one of 34 projects currently under construction across the state. The new season also will see RIDOT work to improve 146 deficient bridges, a number that put Rhode Island dead last on the list of states in the nation with the worst bridges.

But Alviti said things are looking up.

"We've only moved up a couple of points but we're out of the basement," he noted.

McKee noted that the new construction season will result in $1.4 billion of investment in Rhode Island's infrastructure.

The costliest project in Rhode Island is the Route 6/10 Interchange connector in Providence at more than $400 million and in its third full year of construction. It is set to be finished by fall 2023.

"We're seeing those dollars be put to work in this season. A major challenge for all is to make sure we manage it well and I'm confident we will," said U.S. Sen. Jack Reed, one of the lawmakers who helped secure federal funds for Rhode Island, in speaking with NBC 10 News.

And it's not just roads and bridges that will be built or upgraded in 2021. Crews have started work on the Pawtucket-Central Falls train station. In addition, new bike and pedestrian pathways and improved bus hubs also are on tap.

"These projects will not only create good paying construction jobs, but also safe, updated, resilient infrastructure for our residents," McKee told the Providence TV station.

According to RIDOT, the I-95 Northbound Viaduct project's key element is the replacement of the 1,300-ft.-long structure in downtown Providence. In addition, a collector-distributor road will be built to eliminate the bottleneck where northbound traffic from the nearby Route 6/10 Connector crosses traffic trying to exit at Route 146 and the State Offices.

The Route 6/10 reconstruction project, the most expensive in Rhode Island's history, is a massive effort to improve the entire interchange while replacing or removing the seven structurally deficient bridges within its footprint.