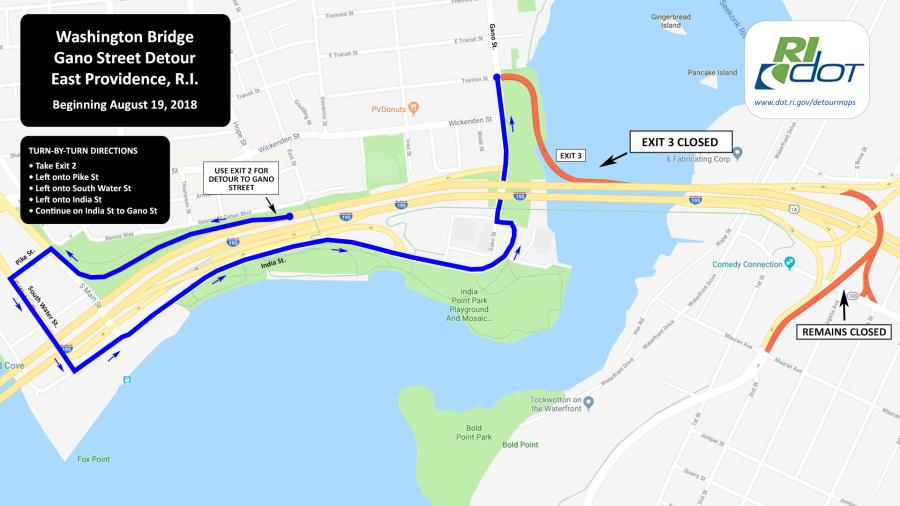 The Rhode Island Department of Transportation (RIDOT) announces the long-term closure of the Gano Street (Exit 3) off-ramp on I-195 West in Providence. Effective Aug. 19 the ramp will be closed through fall 2019 as part of the rehabilitation of the Washington Bridge, which carries I-195 West from East Providence to Providence.

These changes will create a safe work zone in which RIDOT can begin rehabilitation of the northern half of the Washington Bridge in the shortest amount of time. The area under construction is directly in the path of travel for vehicles that normally use the Gano Street off-ramp.

On Aug. 20, RIDOT opened a temporary on-ramp from Taunton Avenue to I-195 West. The temporary ramp is needed because the work zone for bridge construction encompasses an area too close to the original on-ramp to keep it open. The temporary ramp will significantly reduce the impact of Washington Bridge construction for motorists in East Providence who normally access I-195 using this ramp. Detour maps are available on RIDOT's website at ridot.net/DetourMaps.

This portion of the Washington Bridge is a separate structure from the portion which carries eastbound traffic, which RIDOT replaced in late 2000. It has been more than 20 years since the last major rehabilitation of the westbound bridge, which was built in 1969 and carries 70,000 vehicles per day. The bridge is structurally deficient. It would be more than twice as costly to replace the westbound portion of the Washington Bridge as it is to repair it.