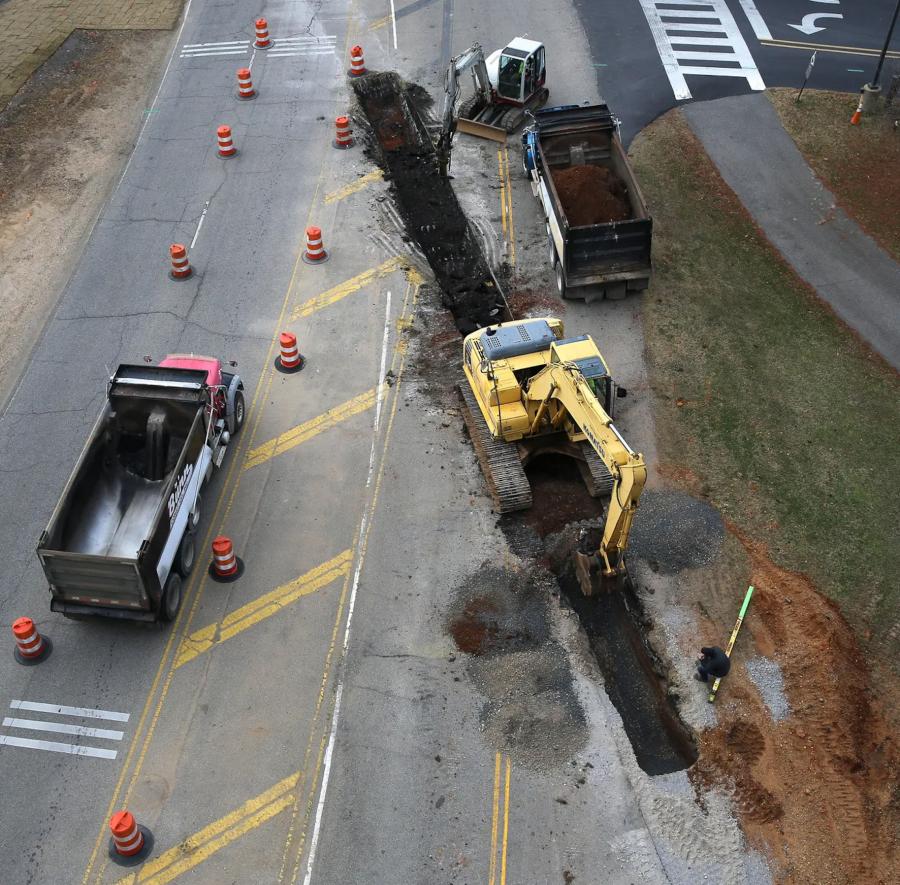 A construction crew digs a trench across Jack Warner Parkway beneath the overpass for the Hugh R. Thomas Bridge in Tuscaloosa. (Gary Crosby Jr./Tuscaloosa News photo)

Efforts to improve and beautify a west Tuscaloosa, Ala., road corridor advanced in early December with the city's commitment of $1.767 million toward utility relocation.

Initial construction on the first phase of the overall $33 million project began in earnest just after Christmas last year.

In preparation for Phase II, at least $1.75 million will be spent to relocate existing overhead Alabama Power lines to underground conduits, according to the Tuscaloosa News.

The work also includes the replacement of curbs and gutters, the installation of sanitary sewer and water main lines, and the upgrading of landscaping, irrigation, lighting and security cameras along the route.

Phase II's construction is expected to begin in February and last 15 months, or through the end of May 2023, before it is completed.

The remaining $16,216 of the project budget, as approved by the Tuscaloosa city council's finance committee, will place Comcast cable infrastructure underground throughout the rest of Phase I, which still is on pace to be finished in May 2022, city officials told the Tuscaloosa News.

The third and final phase of the Jack Warner Parkway/Martin Luther King Jr. Boulevard upgrades will create two spur roads off the main thoroughfare. Whether that happens as planned is dependent upon an agreement between Tuscaloosa City Hall and the Kansas City Southern Railway Co., which operates the rail line that crosses the nearby Black Warrior River.

The purpose of the road improvements between Greensboro Avenue and Stillman Boulevard is to improve public safety and foster economic development, city officials told the News. The project also has a plan to widen the roadway under the wooden railroad trestles near the Tuscaloosa Amphitheater.

Widening of the trestle openings cannot happen, though, without approval from Kansas City Southern and, currently, most of the plans have been approved. A draft agreement between the railroad and the city is being negotiated, the Tuscaloosa news source noted.

The cost will first be paid by City Hall and eventually be reimbursed to local taxpayers — in full — by the Tuscaloosa County Road Improvement Commission, per an agreement that dates to 2017 between the two government bodies.

After years of planning, delays and reconfigurations, the first phase of the project was approved in October 2020 by the Tuscaloosa City Council when it awarded a $9.56 million contract to Duncanville, Ala.'s GFC Construction Inc.

Last August, the final tract needed for the project was bought by the city council for $1.6 million. The 5.7-acre wooded lot, just west of the Tuscaloosa Amphitheater, extends to the river and has a loading facility for petroleum coke, a byproduct of oil refinery production at Hunt Oil Refinery that is used in metallurgical manufacturing.

Cleanup of this site is already complete, Tuscaloosa officials said, an effort that was privately funded.