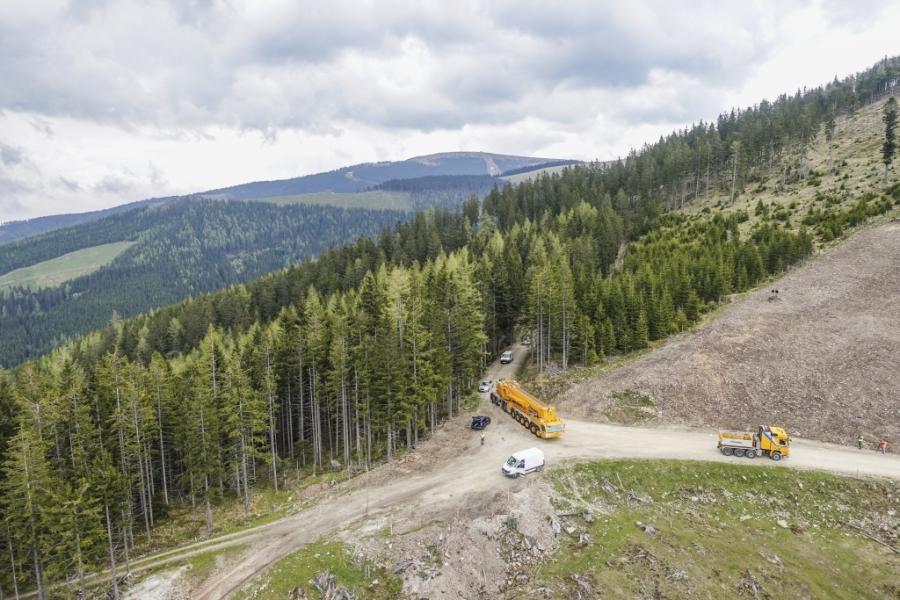 The Terex AC 1000 all terrain crane was virtually predestined to erect large wind turbines. When it came to this particular project, however, Austrian crane service provider Prangl and its team were faced with a daunting challenge before the lift even started – it would first be necessary to take the nine-axle unit to “new heights,” as the corresponding Enercon-operated wind farm site was located on the ridge of the Pretul mountain in Styria, at an altitude of around 1,600 meters.

A description of the route had already made it clear that getting to the work site would be no walk in the park: an altitude of 1,600 meters, slopes of up to 18 percent, and the whole trek made up of narrow and mostly unpaved winding roads, peppered with steep bumps and deep depressions. Even with these adverse conditions, The Prangl team, which was performing the job on behalf of Enercon, planned for the whole climb to take no more than two hours – two and a half tops. And this despite the fact that it was the first time Prangl was using this crane. Nevertheless, Prangl Site Manager Peter Glier was optimistic: “The AC 1000 is designed precisely for this kind of thing, it won't have a problem getting there.”

The Prangl site manager's confidence in the crane's abilities was not unfounded: “Thanks to a sophisticated drive design in which every axle can be steered, our nine-axle AC 1000 is more than a match for any extreme route. On top of this, every axle has its own independent suspension, meaning that the crane can easily handle tough bumps and depressions,” explains Terex Sales Manager Robert Puchner, who was present at the debut of Prangl's new crane with a fellow team member in order to provide on-site support if necessary. This boosted the level of confidence at Prangl even further: “We know that we can depend on Terex Service one hundred percent at any time – they always have a solution ready for us.”

Crane operator Heinz Schuller in particular was thrilled with the AC 1000 crane's cross-country mobility and gradeability, which he got to experience first-hand as he drove the crane to the work site in a convoy with ten escort vehicles within one day: “Even driving the new crane on the freeway made me realize how impressive it is: despite its size, it has extraordinary straight-line stability and excellent handling performance. And the suspension is tuned perfectly.” But the moment of truth would come only until the last few kilometers, when driving up the mountain. In addition to the numerous bumps and depressions, the winding roads also proved to be a unique challenge: two of the passes were so narrow that it was only possible to drive through them in reverse. The Prangl team, which has a wealth of experience with mountain projects to fall back on, used a tried-and-true technique to deal with this: “Whenever we need to cross a stretch like that, we first find a maneuvering point that we can drive into and then back off from in reverse,” explains Peter Glier, who has already used this “trick” several times with his team when dealing with difficult uphill drives.

Things got exciting once again right before the crane's destination: The last stretch in the route was so steep that the Prangl team set up a truck as a tractor in front of the crane out of caution. “The engine on the AC 1000 is more than powerful enough to handle that kind of thing, so it wasn't a matter of the engine output not being sufficient. Instead, our concern was that the wheels could start spinning due to how steep the slope was,” Peter Glier says when explaining why they took this precaution right as they were getting to the top of the mountain. Once at the top, crane operator Heinz Schuller still had nothing but good things to say: “The AC 1000 more than proved itself. Its outstanding transmission enabled it to smoothly handle even critical situations, such as driving on steep, unpaved mountain passes.”

Once there, the actual lifts were a matter of routine for the Prangl team and its crane: After two setup days with two team members, the crane was ready to start lifting. And thanks to its large lifting capacity and high lifting height, it proved to be the ideal machine for the job: It was able to easily lift all steel sections, nacelles, and rotor blades – with maximum weights of 58 tonnes – to the required height of up to 78 meters while working with a radius of 21 meters.

Given the special local weather conditions and the small time slots when crane operations are possible, only a crane that is able to be moved quickly and with little effort can really support the Prangl team achieving just in time its ambitious schedule erecting 14 wind turbines in a total of three months. The AC 1000, as a results of its well-engineered design, facilitates that projects can be quickly and efficiently carried out, the Prangl team being able to take advantage of this strength.