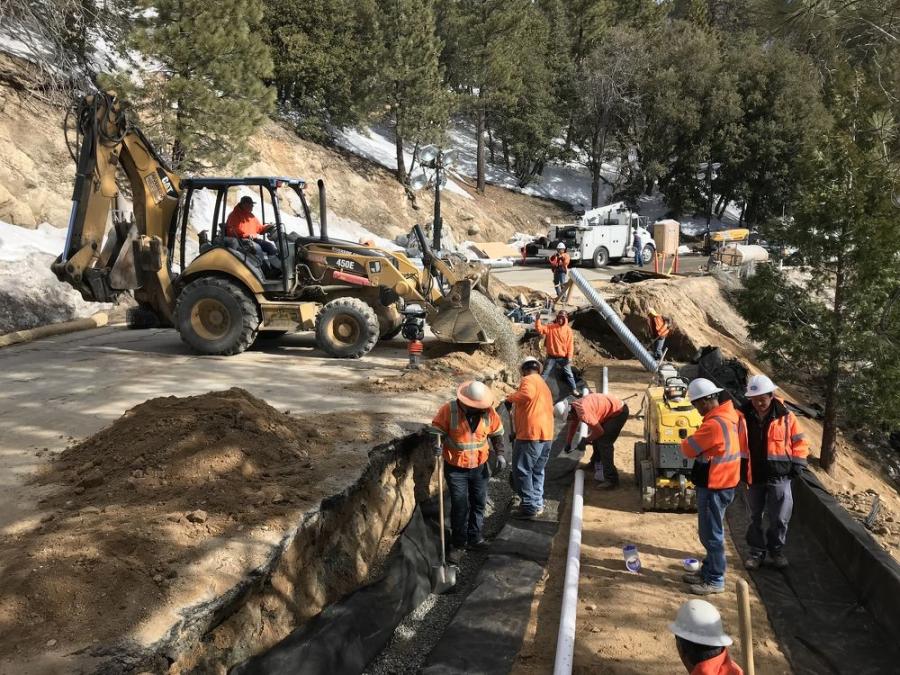 Crews must repair sections of the road bed, with slope loss under the road. (Caltrans photo)

Following a brutal winter season that brought record rainfalls, sharp winds and heavy blankets of snow throughout portions of the state, work crews in Southern California are currently focusing their efforts on areas ravaged by recent torrential downpours.

"Caltrans District 8 oversees the state highway system for Riverside and San Bernardino Counties," said Terri Kasinga, spokeswoman for the California Department of Transportation (Caltrans). "Maintenance crews have been dealing with drainage issues, rock removal, mud and debris flows and flooding/standing water on freeways. In some areas, flooding was severe enough to cause complete road failure and collapse.

"As a result of storm activity, there have been mud and debris flows on SR 38 and other desert and mountain roadways. Rock fall is prevalent on mountain routes also. However, the storm that caused the most damage resulting in emergency projects and repairs took place on Feb. 14. The routes affected were SR 18, SR 111 and SRs 74 and 243." 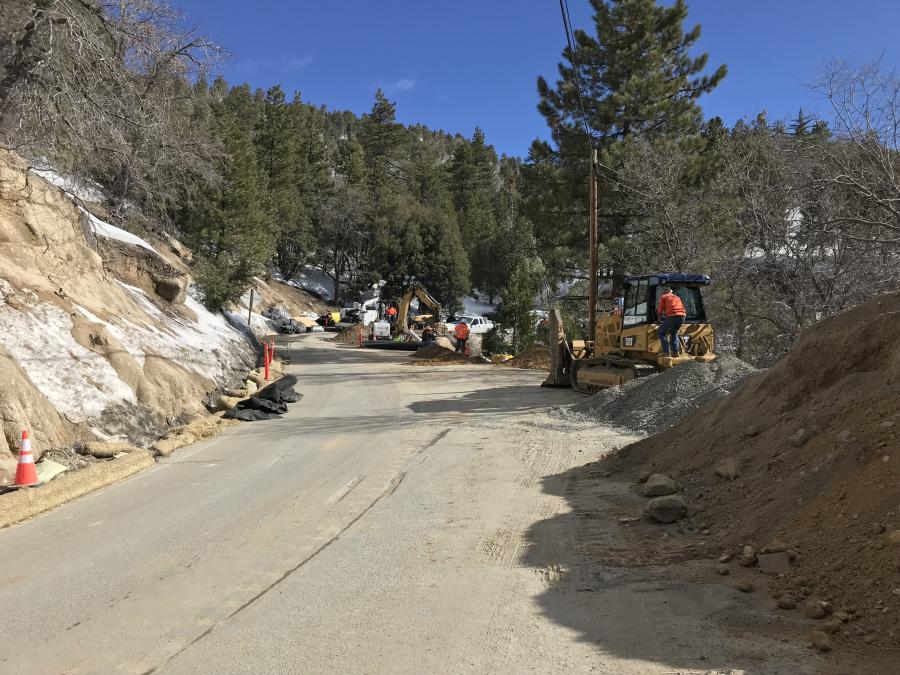 SR 74 and 243 near Idyllwild suffered a road collapse on Valentine's Day, because of too much water that overtook the slopes above and under the roadbed. In addition, crews had to deal with culvert and drainage loss issues, slope and rock fall due to the storm, with routes remaining closed indefinitely. The area is currently under emergency contract.

Also affected were SR 18 in Arctic Circle below Big Bear Dam, SR 18 near Big Bear Dam and SR 18 in the Narrows between SR 138 and Lake Gregory Drive. Crews must repair sections of the road bed, with slope loss under the road. Emergency projects will begin once the storm systems subside. There are other areas of undermining beneath the roadbed, similar to sinkholes, on SR 79 and 371 near Anza and Aguanga.

"Work includes rebuilding the road; rebuilding upper and lower slopes; repairing/replacing drains and culverts; slope removal and rock scaling due to continuous rock and debris falling; new pavement; signage; and delineation, once complete in the areas of damage. This is all attributed to the Cranston fire that was started by an arsonist last year. There was still an emergency contract in place to make repairs to culverts and drains, as the result of the fire, when the storm hit and caused more damage."

Arriving on scene to witness the pounding SR 243 and SR 74 took was sobering for Kasinga.

"It was apparent that the damage was what we categorize as ‘major', and that it would take a long period of time to repair, restore and reopen the highway to residents, businesses and tourism. The power of water and how it overtook the roads and mountain area was unbelievable. I stood there watching it, and knew not to try and cross the bridge or pass a section of road where water was still raging through." 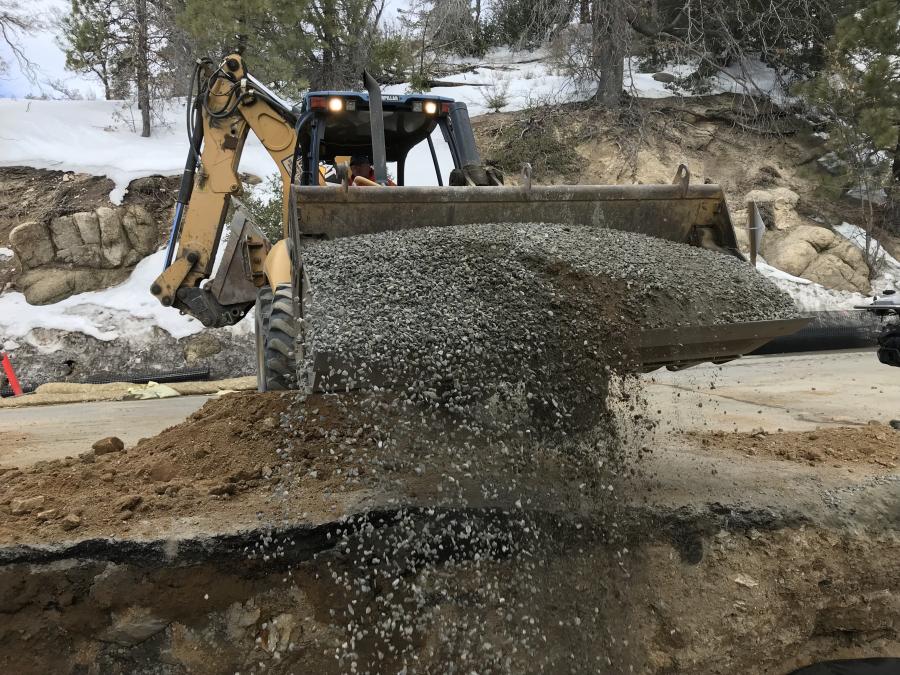 Reaction from motorists and the community has been mixed regarding Caltrans' response to the extreme conditions.

"Some are thankful that we are there and maintain the open portion of SR 74. Others don't understand the magnitude of the damage that took place on SRs 74 and 243. Things have calmed down somewhat, and the community has a new ‘normal' with the detour route. Caltrans and California Highway Patrol will be meeting with the community soon to discuss the repairs and possible length of time before the route can be partially or fully open for public access."

For District 8, the cost for emergency repairs for the mid-February weather event is close to $17 million.

"That number is expected to increase with impending storms and damage that continues to result from the February 14 storm," said Kasinga. "Some damage occurred in the coming days/weeks. It's affected several resort communities in the area."

On a more positive note, the emergency project on SR 18 near Green Valley Lake is complete, with SR 18 now open to the public from Green Valley Lake to the Big Bear Dam in both directions. The work involved digging up and replacing lost dirt under the roadbed, replacing culverts and repaving the new roadbed.

SR 111 near Palm Springs experienced a wash out under the road bed and partial roadbed loss. It is now open, with repairs made under an emergency contract. SR 18 near Snow Valley also is now open, having suffered similar problems, as well as a need for culvert repairs. 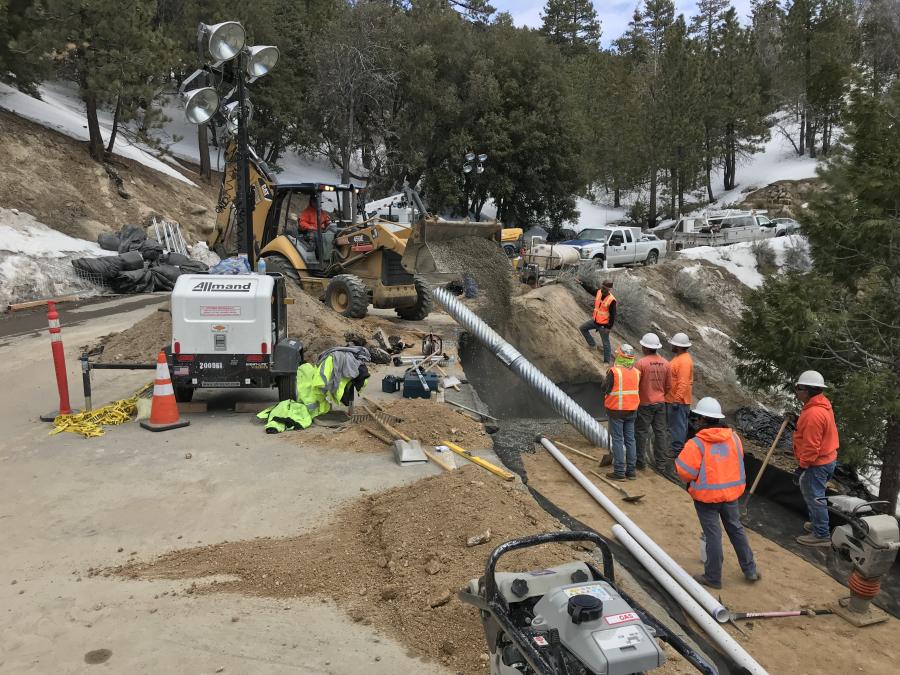 Kasinga said finishing work on some of the areas hit is a big relief to everyone involved.

"It's very rewarding, but it's even better to be able to tell the communities and the traveling public that work is completed, and they have access to resort locations, businesses and residences. Especially at the height of ski season, since it's been so dry in previous winters."

Kasinga noted that Caltrans maintenance, construction, geotechnical engineers and environmental staff have been working in the field since the damage occurred.

For those involved in the cleanup and repair efforts, the days can be long.

"Our maintenance crews have been working throughout all the storms this winter, 24/7, in 12-hour shifts. They are dedicated to keeping the traveling public safe by clearing rock fall, mud and debris on roadways, plowing large amounts of snow, cleaning drains, responding to accidents and vehicles stuck in the snow, maintaining and setting up chain controls, making repairs to damaged pavement within maintenance constraints, such as potholes, small erosion and washout areas.

The construction engineers and inspectors are working with the emergency contractors to ensure that the projects are going in accordance to plan, and in a timely manner.

"Geotechnical engineers are traveling throughout Southern California, throughout several districts, including District 8, seven days a week to respond to the damaged areas, make assessments, produce recommendations and work plans to address the geotechnical damage assessment for the areas that need repair. All of the roles of Caltrans staff are critical in every way to maintain and repair to safely restore the highways for the traveling public, residents, businesses and goods and services."

District 8 is the largest of 12 statewide Caltrans districts, covering roughly 28,650 sq. mi. of land. According to Caltrans' website, there are four interstates and 32 state routes, totaling 7,200 lane miles within its boundaries.