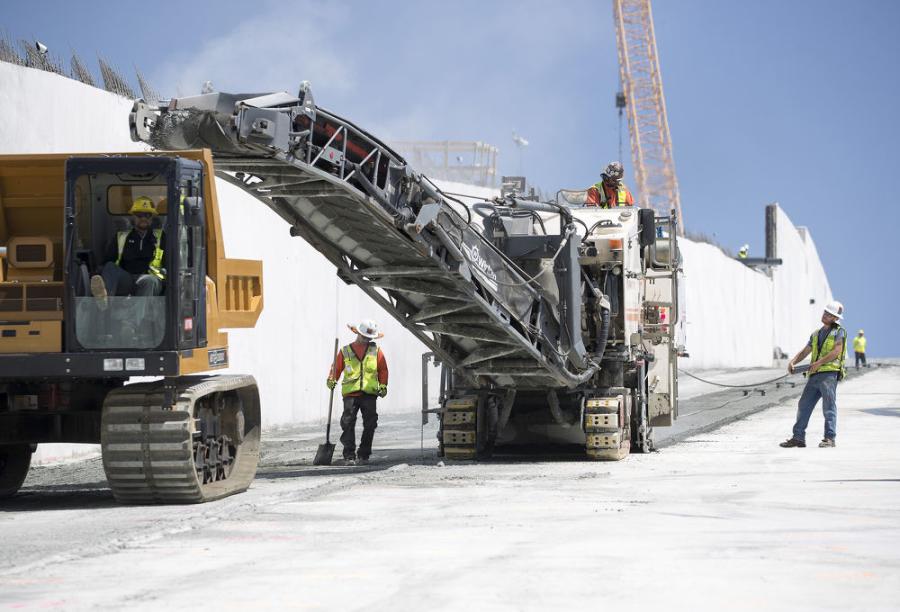 In a grueling mountain application — while aimed downward at a 30-degree angle and steadied by cables from the top — two Wirtgen cold milling machines removed a temporary, emergency-placed concrete surface of the lower part of the great spillway of the Oroville Dam and reservoir in advance of permanent resurfacing.

In the hills north of Sacramento, at 770 ft. (235 m) high, the Lake Oroville dam is the tallest dam in the United States, and provides water supply, hydroelectricity generation and flood control. The dam impounds Lake Oroville, the second largest man-made lake in the state of Calif., capable of storing more than 3.5 million acre ft. (1.1 trillion gallons, or 4.3 trillion liters) of rain and snowmelt water. 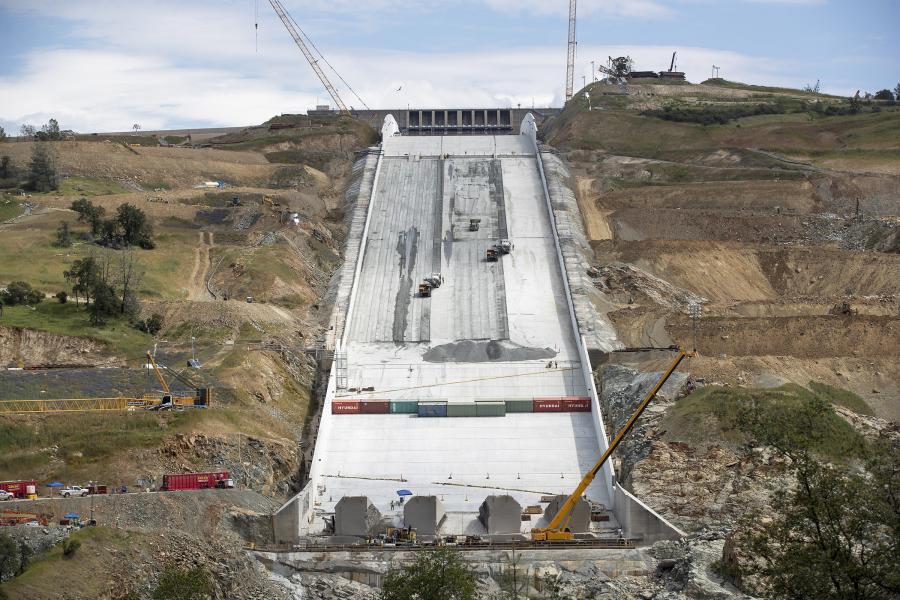 The 2016-2017 season was the wettest winter ever in northern Calif., and the record-setting precipitation brought a massive amount of runoff to the region. At that time, Lake Oroville received an entire year's average runoff, 4.4 million-acre ft., in about 50 days.

Beginning in January 2017, record inflows forced the project owner — the California Department of Water Resources (DWR) — to release excess water down the spillway. More than five million-acre ft. of water from Lake Oroville was released from February through May 2017, more than twice the amount that had ever been released from the main spillway.

But due to the unprecedented volume of water going down the spillway and water pressure from beneath, the main spillway was eroded and damaged to the point where reconstruction was required. In a race to complete the project in time for the winter of 2018-2019, the $1.1 billion Lake Oroville Spillways Emergency Recovery Project was completed Nov. 1, 2018, and Wirtgen products and its customer, Anrak Corporation, Sacramento played an important role as milling subcontractor to the prime, Kiewit Infrastructure West.

First, to restore functionality to the spillway in case it was needed, roller compacted concrete (RCC) was placed where needed to fill eroded gaps, blow-outs and across the surface of the spillway. But this temporary material had to be removed in advance of a permanent fix.

"Anrak was milling roller-compacted concrete that had been placed temporarily during the emergency phase of the project," said Tom Chastain, applications specialist for Wirtgen America Inc. "Ultimately, the finished concrete surface would be placed on that area." 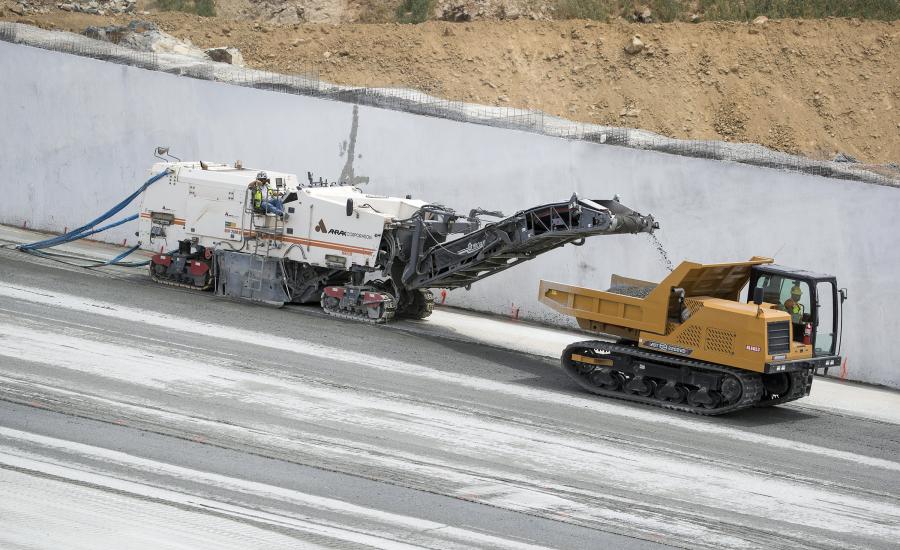 Anrak's Project Superintendent Chris Anderson added, "The section we milled was a temporary fix of roller-compacted concrete, placed so the owner could open the spillway up during the winter rains if necessary. The RCC was placed just to ‘get by' that coming winter. We were grinding it to get it down to finish grade so they could form it and come back with 3 ft. of portland cement concrete for the final surface."

Dimensions of the lower spillway project itself was 1,000 ft. long by approximately 180 ft. wide, resulting in 180,000 sq. ft. of roller-compacted concrete removed, on an average of 1 to 1.25 in. deep. This phase of the project lasted eight days.

"We ground the roller-compacted concrete because it had been put in quickly and was not to final, perfect grade," said Anrak's Executive Vice President Tom Schmidt. "They shot the grade for us, and we ran the numbers."

For this work, a W 2100 with 7.2-ft. drum removed approximately 2 in. of the temporary concrete. Milling in tandem, it was followed by its successor model, a W 210i, also with 7.2-ft. drum, to provide a texture to the substrate that would be optimal for placement of the finish concrete.

Wirtgen's Level Pro system kept both machines on grade without fail, Schmidt said. "The way it's engineered into the mill makes it possible," he said. "We've run every grinder out there, and nobody holds grade like the Wirtgen with the Level Pro system. We find it dependable, accurate and consistent, as it doesn't fluctuate or bounce the machine around." 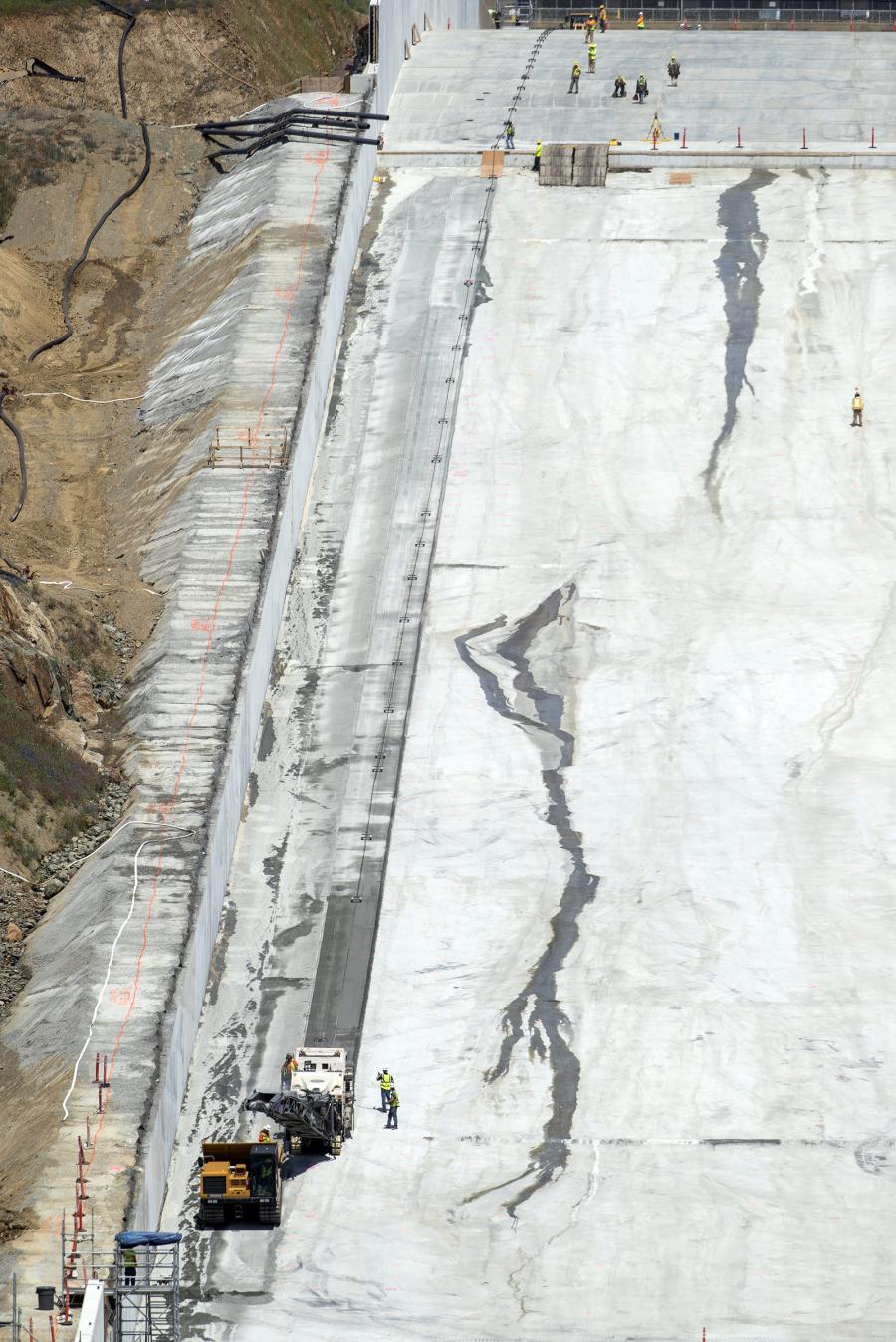 Anrak milled 2 in. of the concrete with the W 2100, removing irregularities, and then brought in the W 210i with a different-style drum to give a different texture on it, Chastain said. "They milled it out wall-to-wall, edge-to-edge, across the surface of the spillway, and put a good texture on it so that when they came back to put the finished layer of concrete, they would have a good base to build on," he said.

The W 2100's drum used an improvised Wirtgen Eco-cutter design with wider bit spacing than conventional, providing fewer teeth but greater breakout force. The drum on the 210i was a standard design, able to put a finer texture on the concrete, supplying a better grip.

"We switched over to an Eco drum for the W 2100," Schmidt said. "We blocked it with spacers and put the bigger holders in for the Wirtgen concrete bits. The Eco drum configuration gives us more horsepower from the machine per tooth, because fewer teeth gives less resistance."

"For the W 2100, on an LA 30 configuration we installed 72 ‘dummy' teeth, essentially covers of the HT11 tool holders instead of teeth," Chastain said. "The covers ‘blanked-out' the holders so we were able to reduce the number of teeth on the drum. This spreads out the pattern with fewer teeth, but with better breakout force per tooth."

For the W 210i, a standard LA 15 cutting drum was used. "The W 210i cut to the final grade, hitting all the numbers, and leaving a smoother texture," Anrak's Schmidt said. Wirtgen W 22 concrete cutting tools were used on both drums for their durability. The concrete strength on the project was measured between 6,000 and 9,000 psi and was about seven months old, and getting stronger the longer it aged.

Then, the W 2100 made its initial pass, followed by the W 210i. As they made their downward passes under their own power, each mill was secured by a wire rope connected to a large wheel loader above. The wire ropes were attached to all four corners of the massive loader buckets. The W 2100 was secured with a 1.25-in. cable, and the W 210i with a 1-in. cable. Each cable had a total length of 1,487 ft. 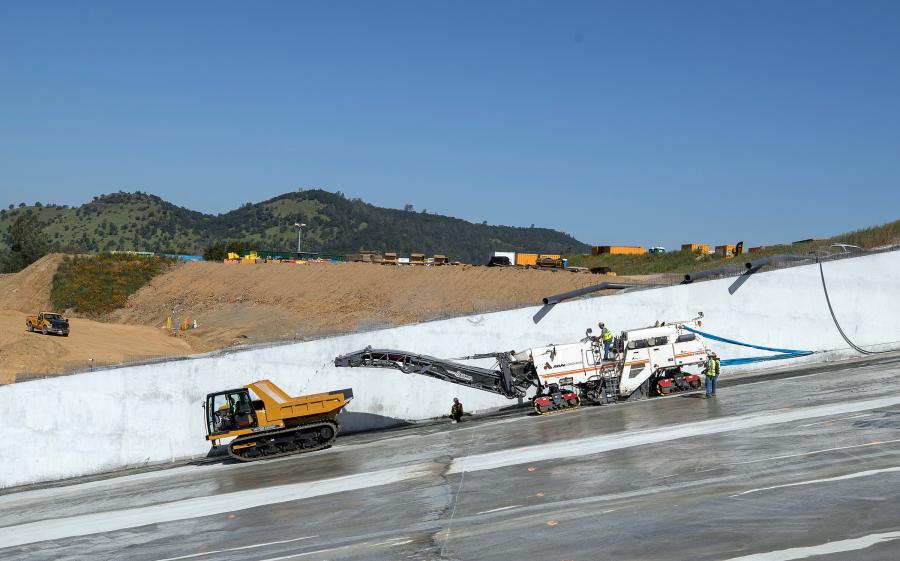 But the wire ropes inadvertently posed their own problems: as work progressed, the cables began abrading the concrete surface. The solution was simple: set the cables on tops of several hundred wheeled "dollies" used to move heavy furniture. These elevated the cables above the surface, yet could shift as needed to accommodate cable movement.

"Initially we did not have the wheels underneath the wire ropes, so the cables started rubbing on the finished concrete at the top of the spillway," Chastain said. "The dollies saved the concrete surface. They came from furniture stores, hardware stores, anywhere they could find them. It seems they may have bought every furniture dolly in northern California."

"The furniture dollies were rated at 1,000 lb. capacity each," Schmidt said. "We bought every furniture dolly we could within a 70-mile radius, and found more than 800 of them. We spaced them every four feet and connected the cable to the dolly with electric conduit clamps."

The milled material came out very small-sized, he added. "They maintained a forward speed of 9 feet per minute, so the cutting tools were making more hits in a shorter distance," Chastain said. "They moved this slowly to maintain the texture, but also for safety, as they didn't want the machine to be milling too fast going down the spillway. The result was a smaller milled aggregate." 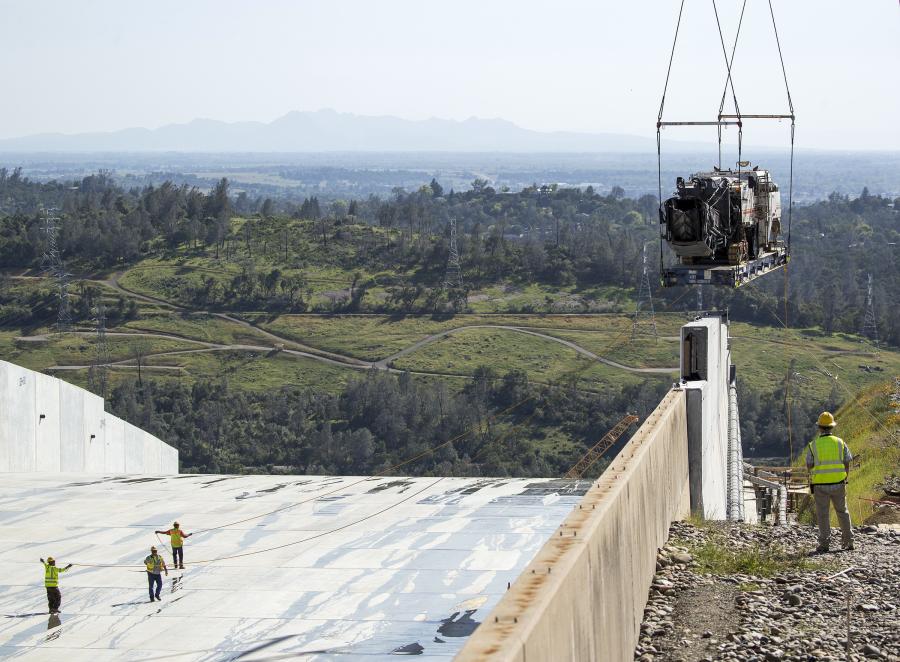 Milled aggregate was deposited in tracked 7 cu. yd. haul vehicles, usually used in difficult open-cast mine applications. "All milled material was dumped at the base of the spillway by the trucks, which you might call all-terrain haul vehicles, Chastain said. "They had zero turn radii so they could pivot 180 deg in a single spot. They would drive forward down the spillway, rotate halfway and dump the material, then rotate halfway again back at the mill."

"They fit our needs very well," Anderson said. "They could articulate all the way around 360-degrees. They would go straight down the grade, turn around, dump the millings, drive back up to the grinder, and turn around again to receive millings. The haul vehicles then dropped the millings at the bottom of the spillway, and the milled aggregate was being taken to a concrete plant to be recycled into more concrete for the job," Anderson said.

Likewise, the Wirtgen mills would back up the spillway at the end of a pass. They were not pulled up by the wire ropes, which were only used to secure the mill on its downward pass. Generally, a downward pass would take an hour and 45 minutes to two and a half hours to complete, with another 30 to 45 minutes to back up for next pass. Each mill made 28 passes, 7 ft., 2 in. wide.

Safety was paramount during this application, and no stone was unturned in providing a safe working environment. All workers had live communications at all times via headsets. The mills were secured with cables to prevent runaways. And a wall of freight containers was placed side-to-side at the bottom of the spillway to stop anything which might come its way. 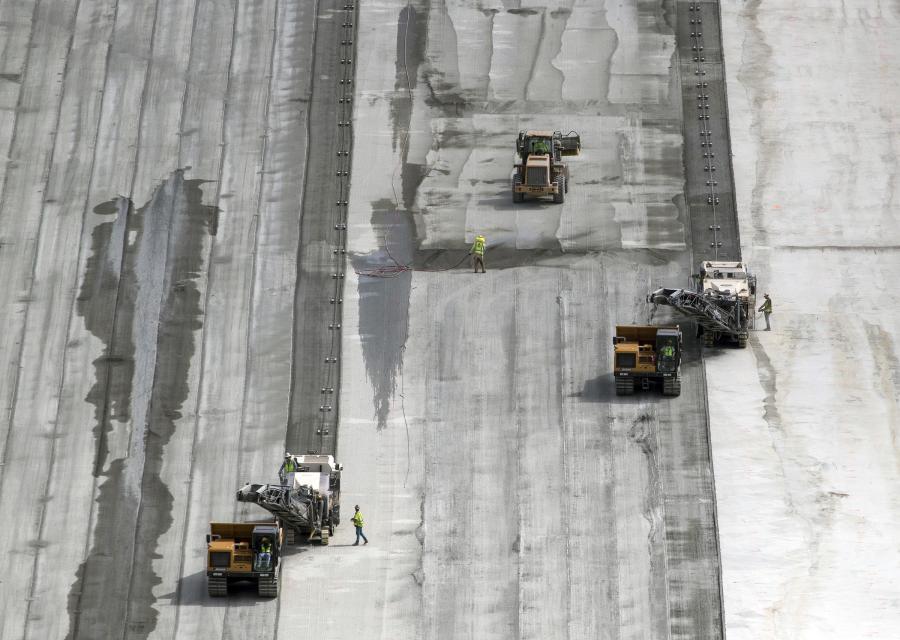 "The overall safety precautions were phenomenal," Chastain said. "It was a delicate situation, as nothing like this had ever been tried before. They crossed every ‘T' and dotted every ‘I' over and over to make sure everything would be safe. Meeting after meeting set out the procedures and made sure the whole ‘ballet' was orchestrated so everything ran right."

"The most challenging part of this job was that it had never been done before," Schmidt said. "Every bit of it was challenging. The communications routines — from mill operators to loader operators, and more — had to be settled. All our milling procedures had to tested, the correct tension on the wire ropes established. We worked it out on the fly. Kiewit's foreman, Monty Rhodes was a huge help to us in being successful. We spent more days in preparation than on the job."

"Grinding was the easiest part of the project," Anderson said. "The whole project was engineered and ‘stamped' before we could even set foot on the spillway. We made sure we had the right product out there, and made sure our guys were the safest they could be. The most difficult part was making sure every hour, all day, that our guys would go home at the end of that day, safe and sound."