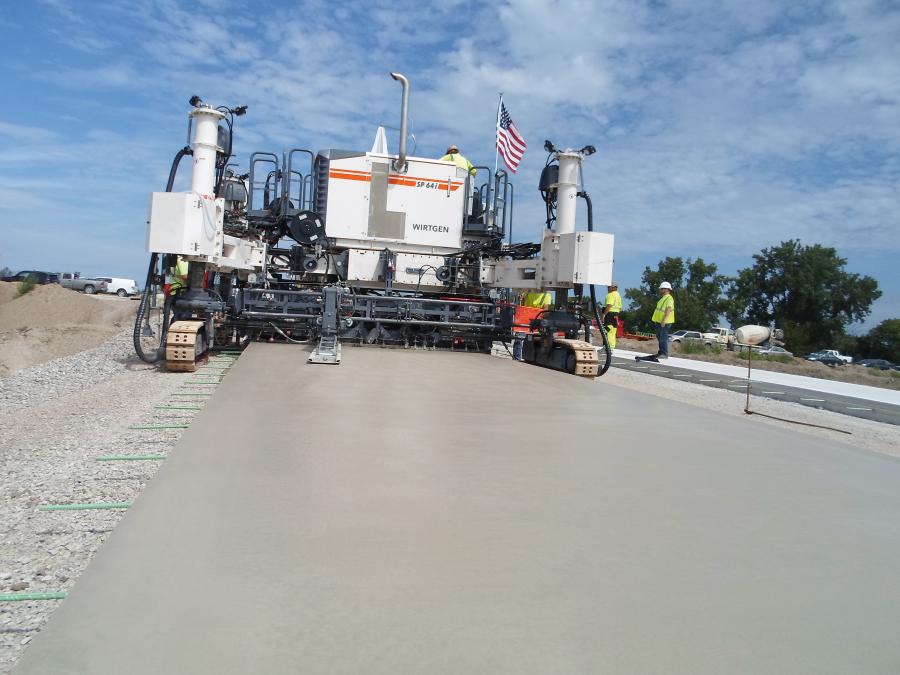 Due to its versatility in inset and offset applications, the SP 60 series slipform paver is the new multi-talent for concrete paving. With its SP 61i, SP 62i and SP 64i models, Wirtgen has developed a new generation of slipform pavers that combines the diverse applications of the globally successful SP 500, with the modern technologies of the next larger SP 90 series.

As part of its modification measures to comply with new emissions laws, Wirtgen has equipped the SP 60 series with greater engine output. The machines that meet EU Stage 4 and U.S. Tier IV Final emissions specifications have a 241 hp (180 kW) Deutz engine, with about 40 percent more power than the SP 500 (+20 percent at EU Stage 3a/US Tier III). Despite the higher output, fuel consumption is reduced by the Wirtgen Eco mode, which automatically adapts engine output to power requirements.

More features than ever operate hydraulically in the SP 60 series. Due to a new hydraulic concept, energy is now used much more efficiently, making it available for new equipment options, for example, trimmers and a large delivery screw for offset applications, or the four swivel arms used to switch the machine from transport to working mode faster. The system starts as a basic version, and grows along with the number of modular equipment options selected. Customers save by choosing only the options they want.

Likewise, the intelligent machine control systems in Wirtgen's slipform pavers are modern. Interfaces for the Wirtgen Group's WIDIAG service diagnosis and WITOS FleetView systems support users, as does the optional Paving Plus package. Combined with this package, the swivel arms can actively circumnavigate obstacles during the concrete paving process, according to the manufacturer.

Another new development is the option of choosing between two undercarriage sizes. For professional concrete paving at job sites with unpaved ground, the lanes for the pavers must be stabilized ahead of time. However, the larger crawler tracks exert less contact pressure per unit area, reducing the pressure on the ground, thus giving the slipform paver the stability it needs. This in turn has a positive impact on the quality of the paving results.

Apart from integrating the latest technologies in the development of the new SP 60 series, Wirtgen also adapted user-friendly operation and synergies of the SP 90 series to the SP 60 line.

Various features make the machines both simple and flexible to operate: a walkway that now extends across the full width of the machine for the first time, plus a standardized operating and control concept like that in the SP 90 series, comprises a central control system and four additional local control systems as standard. Intelligent interfaces support the plug-and-play connection of additional options. For example, remote controls can be connected to each of the crawler tracks to simplify and speed up setup of the slipform paver, such as the positioning and zeroing of the crawler tracks and swivel arms.

Like the modular system for the SP 94i and SP 92i, customers can now choose between different slipform systems for inset paving.

The slipform modules are fully compatible with the SP 90 series. The SP 64i (four crawlers on swivel arms) and SP 62i (track steering) can thus pave concrete in widths of up to 20 ft. (6 m) and thicknesses of up to 18 in. (45 cm) or more on customer request. Even widths of up to 25 ft. (7.5 m) are possible if the machine is equipped with electric vibrators (without DBI).

Also available are various offset molds and a variety of typical offset options, such as trimmers, different conveyor belts or augers. The three- or four-crawler version of the SP 61i can slipform medium to large concrete profiles to the left or right of the machine. Contours of almost any shape — roadway edging, concrete safety barriers, water gullies and paths up to 12 ft. (3.6 m) wide — can be produced cost-efficiently and in high quality. Due to their increased stroke, the lifting columns can now be raised up to 44 in. (110 cm), and have 17 percent more power than in the SP 500. This gives the user much greater flexibility, particularly in tight job site situations, for instance when lifting a slipform for a concrete safety barrier. Due to its higher power reserves, it can now handle heavier offset slipforms to expand its range of applications, according to the manufacturer.

With the new SP 60 series, Wirtgen has expanded the variety of applications in its class of machines for widths of up to 20 ft. (6 m) (inset paving) and increased the range of offset applications.

The SP 60 series rounds out the high end of the offset line, comprising the SP 15i and SP 25i. In terms of inset pavers, it bridges the gap between the small and the mid-range models in the SP 90 series, with paving widths up to a maximum of 31 ft. 2 in. (9.5 m).