Richard Carron has long been a proud veteran of the United States Army.

The owner and president of Valley Paving Inc. in Shakopee, Minn., southwest of Minneapolis-St. Paul, Carron served his country in the late 1960s during the Vietnam War.

In 2019, his full-service paving and road construction company is celebrating 40 years in business as a veteran-owned establishment. For years, he has also elected to show his pride in the United States and the country's armed forces by applying decals of the flag and symbols of the various branches of the military onto each piece of equipment used by Valley Paving.

His son, Brent, the company's vice president, said the effort has also been warmly embraced by the public, and the people that work for Valley Paving.

"All our pavers have decals of the American flag and POW flag, and our trucking fleet is wrapped with military displays, too," Brent Carron explained. "Not long after we started to put these large decals on our equipment, we began receiving great comments about them. One of the side effects we found is that our crews are proud when they operate the machines. We really just wanted to give praise to our vets."

"Sarge," the Man and the Machine

The younger Carron said his late maternal grandfather, Harold Raedel, himself a military vet nicknamed "Sarge," was another inspiration for Valley Paving's show of patriotism.

"Sarge" Raedel joined the Marines in 1948 and served his country for 27 years, including one tour in the Korean War in 1950-51, and two tours in Vietnam in 1965-1966 and again in 1968-1969. He achieved the rank of Master Gunnery Sergeant, which put him in charge of tanks and other armored vehicles overseas. 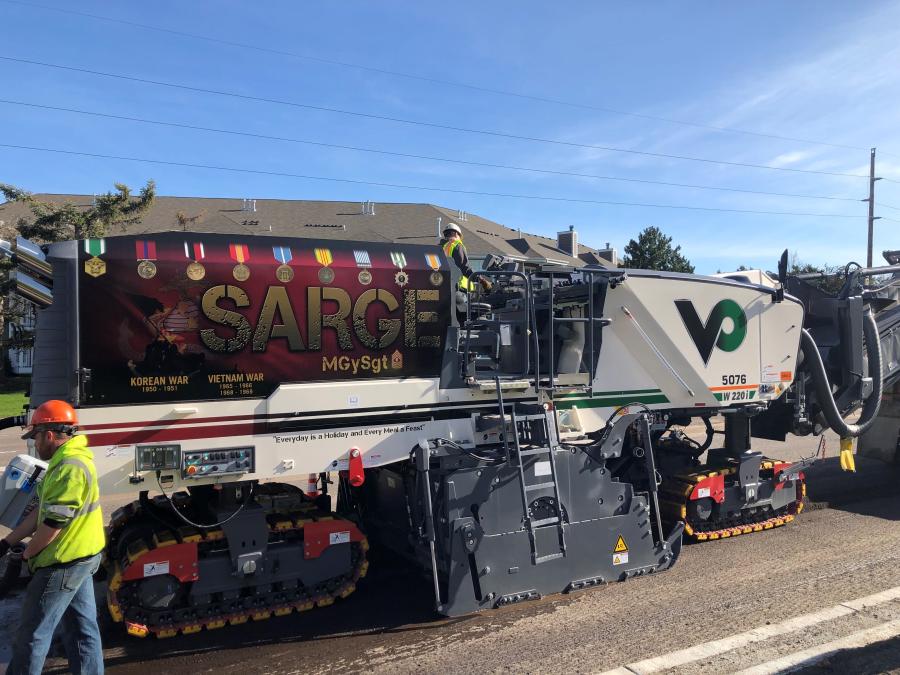 When Rich and Brent Carron decided they needed a new machine to help expand the production of their business, they chose a piece of equipment that was as rough and tough as "Sarge" Raedel, who loved and grew up around heavy equipment as a North Dakota farm boy.

So when Valley Paving bought its 2019 model Wirtgen W 220i milling machine in May, it immediately decided to give it the name "Sarge."

"Each one of our milling machines is named after one of my late grandparents," Carron added. "I thought it was fitting to name this Wirtgen ‘Sarge' because it is the largest and biggest workhorse we have."

In addition to the name "Sarge" on the side of their new mill, the decal also depicts the various medals Raedel was awarded while in the Marines, exemplifying the sacrifice he gave to his country over nearly three decades of service.

A Mill That Fits Any Project

Valley Paving has already seen the benefits of employing the new Wirtgen, a piece of equipment that seems to be specifically tailored for the type of road projects performed by the contracting firm. 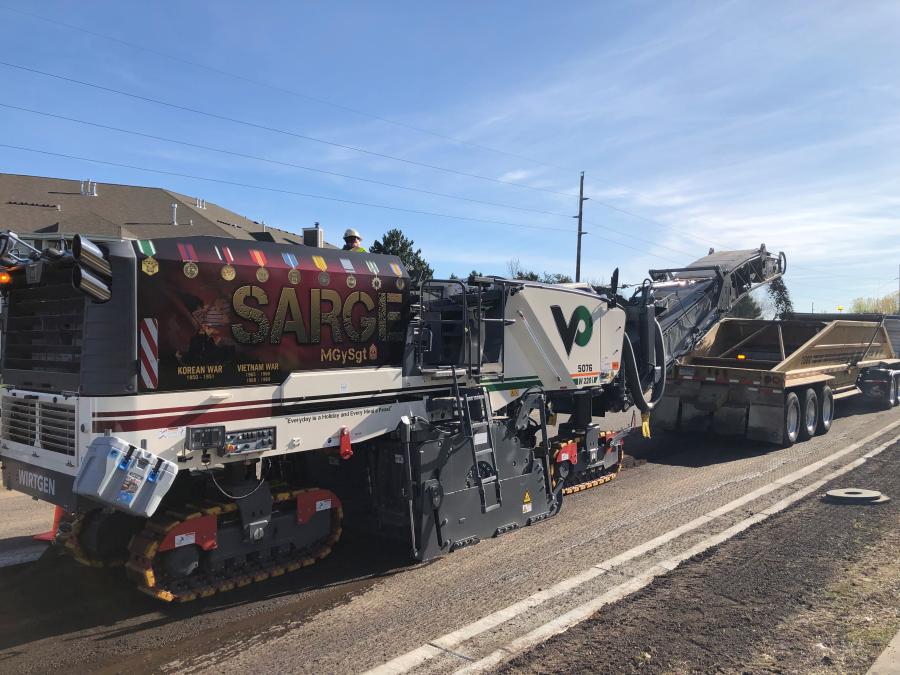 Because of the long Minnesota winters, Valley Paving has a relatively short work season, often only six months out of the year, to fulfill county, state and federal road contracts in the 11-county metro area of Minneapolis-St. Paul.

Recognized as one of the state's best road service companies, Valley Paving's aim is to move fast, yet precise, in its operation. Much of its work is for the Minnesota Department of Transportation, which Brent Carron said wants his company to work more nights and weekends to avoid causing day-time slowdowns on the busy Twin City highways.

"I guess you would say our cup of tea is fast-paced work: weekends, nights, get in and get out type of projects," Carron said. "Downtime is not an option, especially in Minnesota where we only get six months to get our projects done. So, we are known for doing a lot of work in a short amount of time."

New Wirtgen Is One Powerhouse Mill

Valley Paving Inc. realized that with its workload increasing, and with tighter schedules, some of its key machinery needed to be upgraded. At the top of the list was a new Wirtgen milling machine, something they knew would provide them with better production and reliability.

That led the contractors to Hayden-Murphy, one of the top equipment dealers in the Minneapolis area. After talking with their sales rep at the store, Phil Rodriquez, the Carrons bought the 2019 Wirtgen, a powerhouse machine that boasts 800 horsepower.

The new model does layer-by-layer removal of road pavement up to a depth of 14 inches. In addition, it's noted for its bigger production, fine milling capabilities, expert skill at leveling irregularities in the surface course and high aptitude in improving the skid resistance on a roadway. 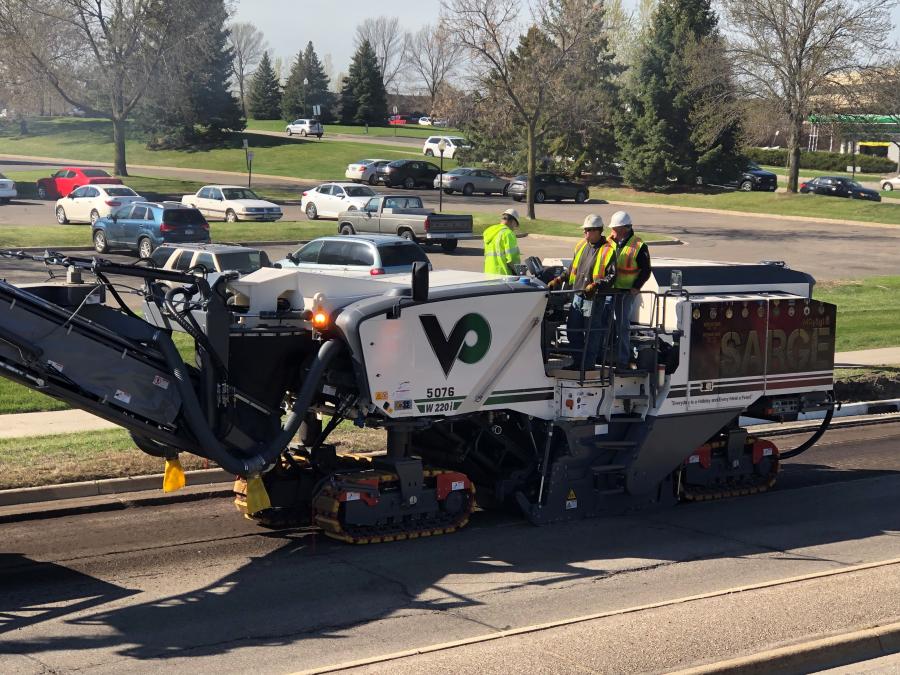 "With the horsepower of this model, we have really been able to get a lot more work done in the short time we have had it," Carron said. "My guys were a little skeptical about how well it would run in the beginning, but they figured it out and now it's a workhorse – more efficient, quicker and cleaner, too."

He didn't waste any time putting the 2019 model right to work, either. So far, the new Wirtgen has been used on various county overlay projects with great results, but plans call for more operations soon.

"We have a job this year working on I-94 from Minneapolis to St. Paul – a pretty large project," Carron said. "It will encompass 18,000 tons to be milled and paved all in one weekend. When you're doing close to 20,000 tons on a weekend, with traffic and plant capacity, as well as crews and mills, you can only put so much equipment into a tight little spot without hurting your efficiency. But that's what we're used to. If you have a breakdown, though, that makes the work much more difficult."

And that's where he counts on the trust Valley Paving has developed with both Hayden-Murphy and Wirtgen.

"We chose them because what matters most to us is warranty, service and parts availability, period," Carron explained. "To my mind, you can look at all the different brands of equipment and see they all cost just about the same; however, when you find a manufacturer and dealer who will stand behind their product and service the customer, that's what it's all about.

"If a dealer isn't open on the weekends, they won't be of any help to me because that's when we do our work," Carron continued. "But both Hayden Murphy and Wirtgen have come to the plate when Valley Paving requested their help, not just in warranty applications, but also in excellent service, and we appreciate that about them."

The Carrons were also impressed that both the manufacturer and the dealer sent equipment experts to their company yard to ensure Valley Paving's people fully understood how to use the model W 220i, the first Wirtgen milling machine the company has ever owned.

"It was time for us to get a new one, something more reliable, something that is going to stay with us for another 10-15 years down the road," Carron said. "We feel good about it, and it keeps us competitive in today's marketplace." CEG