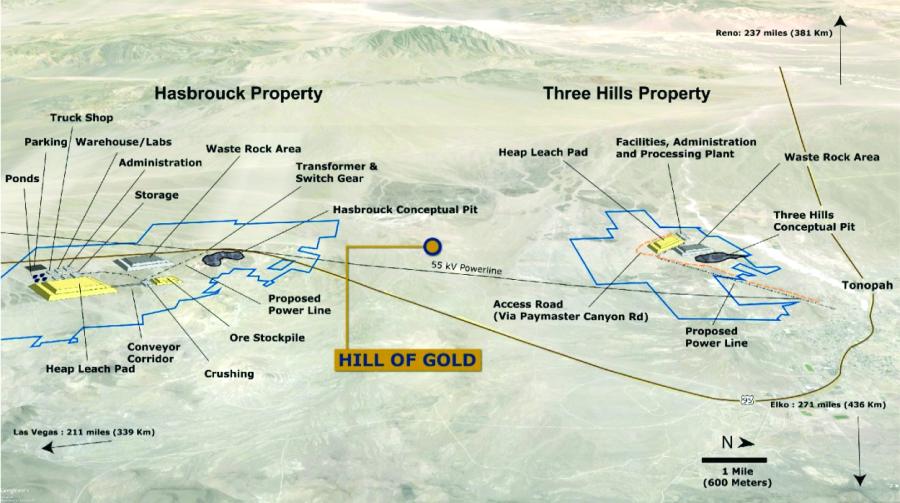 West Kirkland Mining Inc. announced an early-2017 drilling program at the Hasbrouck Gold-Silver Project, which consists of the phase 1 Three Hills pit and the adjacent phase 2 Hasbrouck pit. The Company has contracted Boart-Longyear for drilling services at Three Hills and the recently-leased Hill of Gold properties.

At Three Hills a 4,265 ft. (1,300 m) RC drill program will explore targets identified by previous drilling and geophysical surveys to the east of the permitted open pit by stepping out from hole MW14-01. Drill targets at Three Hills are adjacent to some of the best intercepts on the property. These earlier holes are located within the permitted pit boundary, but are not located within the current Mineral Reserve boundary.

Step-out and in-fill drilling also will be performed at the recently-leased Hill of Gold property which lies 1.9 mi. (3 km) immediately south of Three Hills and between the Three Hills and Hasbrouck Mines. Earlier drilling at the Hill of Gold totals 29,926 ft. (9,121 m) from 83 reverse circulation holes and six core holes. A small historical resource was estimated at Hill of Gold based on past results. Core crushed to 1-1/2 in. (3.8 cm) was tested by McClelland Laboratories Inc. in columns with gold recovery from cyanide leaching projected at 81 percent and 86.7 percent after 62 to 79 days.

Modelling by West Kirkland suggests that these intercepts are open for further expansion near surface at potential open-pittable depths. The Hill of Gold host rocks and geological setting of gold mineralization are similar to the Three Hills deposit.

The Hill of Gold property was leased and is now being explored as a target for possible trucking to Three Hills for processing at the permitted heap leach site there.

The company has commissioned EM Strategies (formerly Enviroscientists Inc.) to continue permitting the Hasbrouck Mine. This work builds on previous biology and cultural base-line studies with the intent of submitting a Plan of Operation to the BLM in Q3 2017. The Hasbrouck Mine is the second and larger part of the Hasbrouck Gold-Silver Project, and has a Probable Mineral Reserve of 588,000 oz. (16,669.5 kg) of gold and 10.6 million oz. (300,505 kg) of silver, 35.3 million tons (32 million t) at 0.6 g/t gold, 10.2 g/t silver, per Mine Development Associates' Technical Report dated Sept. 1, 2016. This work is being commissioned now to ensure that Hasbrouck Mine permits will be in hand when needed before mining at Three Hills is complete.

“The Hasbrouck Mine will require the typical amount of permitting for a mining operation in Nevada, including the completion of an Environmental Impact Statement (EIS). There appear to be no biological, cultural, hydrology, or geochemistry issues that would otherwise delay or disrupt the timely process of applications for development,” states Richard Delong, president of EM Strategies.