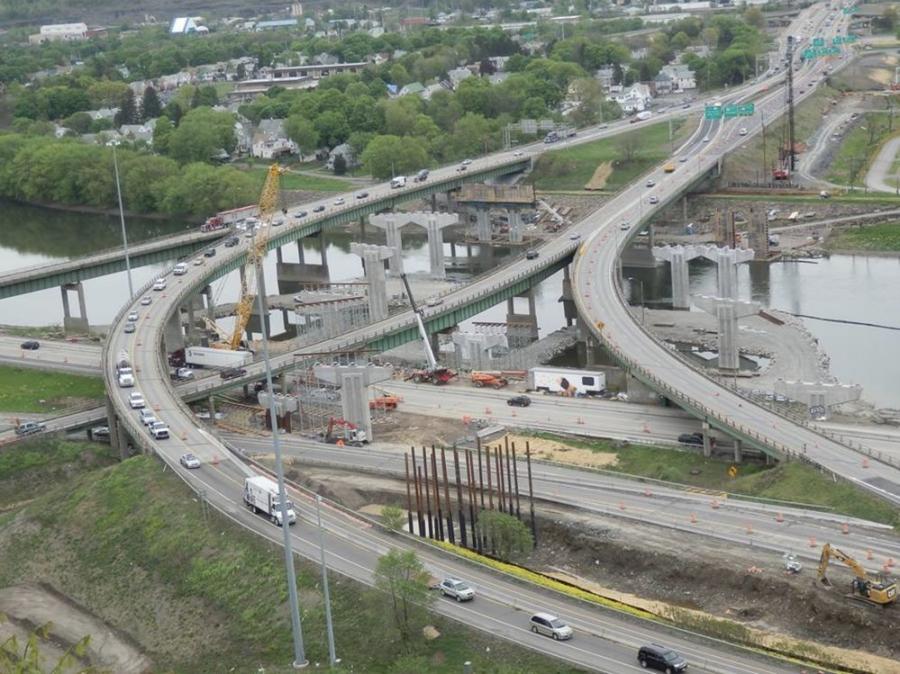 Major construction on the Prospect Mountain project began in the spring of 2012 and the $152 million contract was awarded in May of 2016. (NYSDOT photo)

The construction season is in full swing as crews continue working on the city's Prospect Mountain Project.

Named after the adjacent Mt. Prospect, this long-term project, currently under way in Binghamton, N.Y., addresses the notorious “Kamikaze Curve” section of New York 17 (Southern Tier Expressway) and replaces the structurally deficient bridges over the Chenango River and at the directional T interchange joining the future I-86 with Interstate 81.

The Prospect Mountain Project has been a long time in the making. Neighborhood meetings began in February 2006. The design was approved in January 2008 and the project was awarded in November 2011. Major construction began in the spring of 2012 and the $152 million contract was awarded in May of 2016.

The project encompasses roughly 9 mi. of construction. It's being completed in multiple phases and has several goals.

The goal of the project is to improve operational and safety deficiencies and achieve Interstate 86 designation for this section of State Route 17 to be designated I-86.

According to Department of Transportation (DOT) Regional Director Jack Williams, “The work we've been doing out here is to stay ahead of schedule. We're doing a great job with our contractor, engineering and DOT staffs. During the winter, sometimes you could catch your breath or breathe easy but out here, they've been going 100 miles an hour nonstop.”

Some other headlines for the 2018 construction season include:

Work is expected to be completed by December 2020.