Work Continues On $5.7B Gordie Howe International Bridge Between Detroit and Windsor, Canada 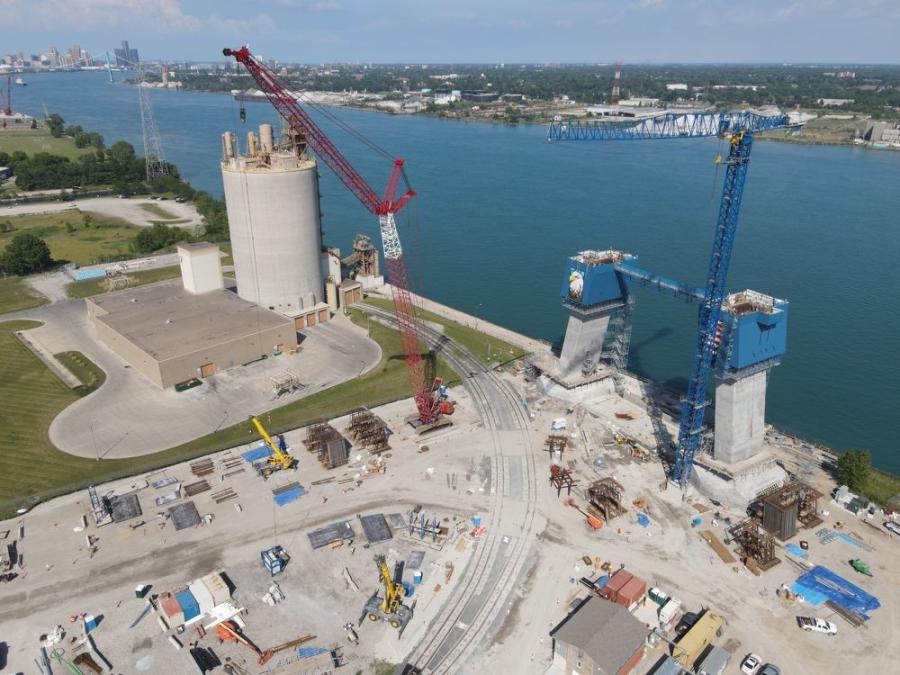 Despite less than ideal weather conditions, construction crews in Detroit, Mich., and Windsor, Canada, are working through the winter on the $5.7 billion Gordie Howe International Bridge project. The design-build project is being led by Dragados Canada, Fluor and Aecon. When completed, the structure will have the longest main span of any cable-stayed bridge in North America, and will be the fifth longest in the world. 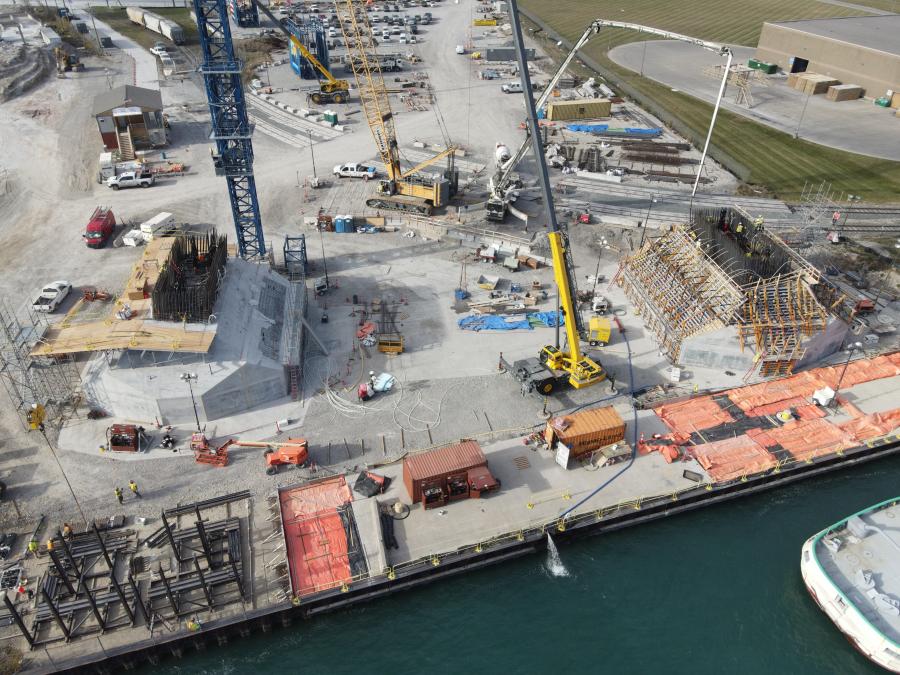 "The project is the largest and most ambitious infrastructure project along the Canada-United States border," said Mark Butler, Windsor-Detroit Bridge Authority (WDBA) communications director. "It addresses the regional transportation needs of redundancy, capacity, system connectivity and improved border processing. It will positively impact the flow of traffic and goods to flow through the Windsor-Detroit gateway, helping our national economies to grow.

"Additionally, this project is creating and sustaining thousands of local jobs during the construction phase, and this will continue through the operations phase and will encourage new investment between Canada and the United States and help to maintain and create thousands of jobs and opportunities on both sides of the border."

In 2015, the governor of Michigan and the prime minister of Canada announced that the publicly-owned bridge between Windsor, Ontario, and Detroit would be named for the legendary hockey player who led the Red Wings to four Stanley Cup victories. The high-profile project requires significant construction activity, including the demolition and removal of existing infrastructure; reconstruction of select roadways and bridges; and construction of new project infrastructure.

In October 2018, WDBA and Bridging North America officials were among those who turned out to celebrate the official start of construction of the project.

"Windsor-Detroit is the busiest commercial land border crossing between Canada and the United States," said Butler. "Approximately 25 percent of the Canada-U.S. bilateral trade crosses at Windsor-Detroit, and it's essential to have sufficient crossing capacity to continue that important trade and to allow it to enhance over the years to come."

Michigan Interchange activities also include associated local road improvements. More than a dozen roadway and pedestrian bridges crossing I-75 and ranging in length from 100 to 1,700 ft. (30 to 518 m) are required.

The bridge towers will top out roughly 722 ft. tall and will rival the height of the highest building of the GM Renaissance Center in Detroit. The bridge deck is approximately 138 ft. above the Detroit River. It will be 121 ft. wide to support six lanes of vehicular traffic and the multi-use path for pedestrians and cyclists. The towers will each require 353,400 cu. ft. of concrete and 4,960 tons of steel rebar for construction. Once completed, the full weight of just one tower will be about 66 million lbs. The towers in Canada and the United States each have two pylons, which give the structures the shape of an inverted "Y".

Two massive bridge towers, one in Canada and one in the United States, — both built on land — will support the bridge deck. The lower pylon, at 460 ft., makes up the longest portion of the bridge towers and supports the pylon head and the cable-stayed system. The bridge will include 216 parallel strand stay cables strung from the tower to the bridge deck. 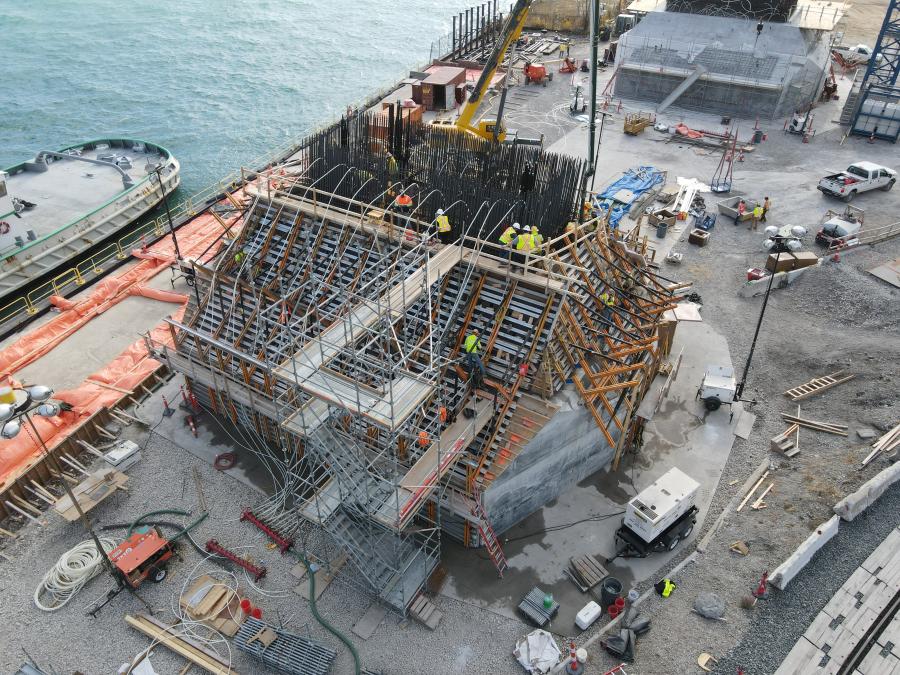 Each individual pylon, or leg, is supported by six shafts which have been drilled into the bedrock to a depth of 118 ft. Each of the shafts are filled with approximately 69,000 gal. of concrete. The upper 262 ft. of the tower, known as the pylon head, will house the cables that are attached to the road deck.

Butler noted that the design-build phase of the project is well under way, and construction activities are continuing on both sides of the border on all components, which include the Canadian and U.S. Ports of Entry, the Michigan Interchange and the bridge itself.

"Construction has started on POE buildings and facilities will continue over the next few years. On the Michigan Interchange, work continues to focus on the reconstruction of the Springwells Street, Livernois Avenue and Clark Street road bridges."

There are a number of challenges for workers. Crews are dealing with different jurisdictions in two countries; therefore, officials must adhere to the regulations in Windsor and Detroit, Mich., and Ontario, and federally those of Canada and the United States.

"As an example, we must follow requirements and the commitments of the approvals under environmental legislation from Canada, the United States, Ontario and Michigan. As well, we must consider mobility of some workers allowing them to work on both sides of the border, the difference in metric and imperial measurements, currency exchange, trades certification in both countries."

Keeping everyone safe during construction is crucial, according to Butler.

"Our employees and contractors are professionals, many of whom have worked on multi-year projects in the past. The health and well-being of our staff and workers is our top priority for WDBA and Bridging North America, and remains at the forefront. This is especially important during these unprecedented times."

Occasional traffic disruptions are required as part of the construction.

"We are committed to lessening the impact of construction on local traffic and notify motorists and local residents about traffic disruptions, detours and road closures in a timely manner to give them the opportunity to make informed decisions about their travel.

"Traffic disruptions are published on our website and posted on our social media channels. Local residents and businesses also are advised in advance of any significant construction which may impact traffic. Every effort will be made to reduce inconvenience to drivers, residents and the business community."

Butler said the once-in-a-generation effort has required a great deal of planning and preparation.

"Given the scope and magnitude of this project, and the closeness of the project to the river, it was necessary to undertake a significant amount of preparatory work before construction could begin. This work included excavation, placement of wick drains and surcharge fill placement to ensure a solid base on which we could build, as well as significant utility relocations."

At the U.S. Port of Entry, major earthwork, including excavation, placement of wick drains and surcharge fill placement in preparation for building foundations, has been completed. Construction of the POE buildings and facilities has commenced and will continue over the next few years. On the Michigan Interchange, work continues to focus on the reconstruction of the Springwells Street, Livernois Avenue and Clark Street road bridges.

The tower legs on the United States' side are now in excess of 250 ft. (76 m), approximate to the height of a 20 to 25 story building. Work also has started on the concrete foundations for the customs commercial building and teams are doing survey and layout work on the main building on the U.S. side. Work will continue on building the POE and tower and I-75 interchange and associated improvements. 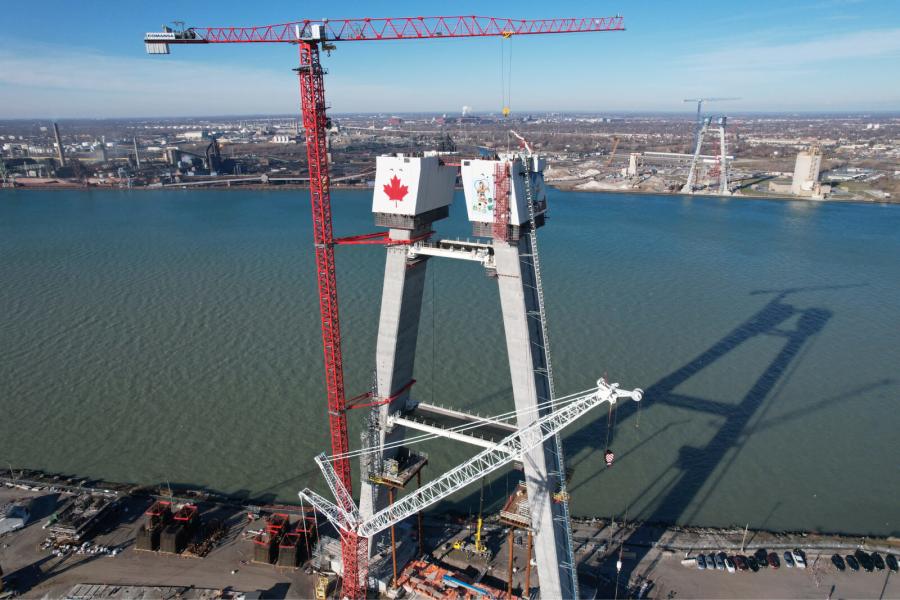 Among the more visible pieces of equipment are the two massive tower cranes, which along with the actual towers being built, are perhaps the most visible signs of the construction activity.

"There are two cranes on each side — a tower crane and a mobile crawler crane," said Butler. "The tower crane will eventually go as high as 250 meters, which will be the highest structure in Windsor or Detroit."

For those on the job, the elements are of particular concern during the coldest months.

"Weather is always a factor when you have a year-round construction schedule and severe weather, which may impact construction," said Butler. "Construction activities are planned keeping weather forecasts in mind. As an example, concrete cannot be poured during extreme cold temperatures. As well, extreme heat can be a factor. We take measures to ensure that worker safety is paramount during extreme heat or cold temperatures."

As with any major infrastructure project, it takes years before the first shovel can go into the ground.

"We've taken the time to ensure that this project meets the expectations of our stakeholders — the traveling public, commercial users, inspection agencies, environmental and other regulatory agencies and the communities on both sides of the border."

As for the most rewarding part, said Butler, "I think for our staff and for our contractors, it's the pride in working on one of the largest infrastructure projects in North America. Frankly, it's not every day that a new bridge is built between Canada and the United States, and certainly not one of the magnitude and scope as the Gordie Howe International Bridge." CEG