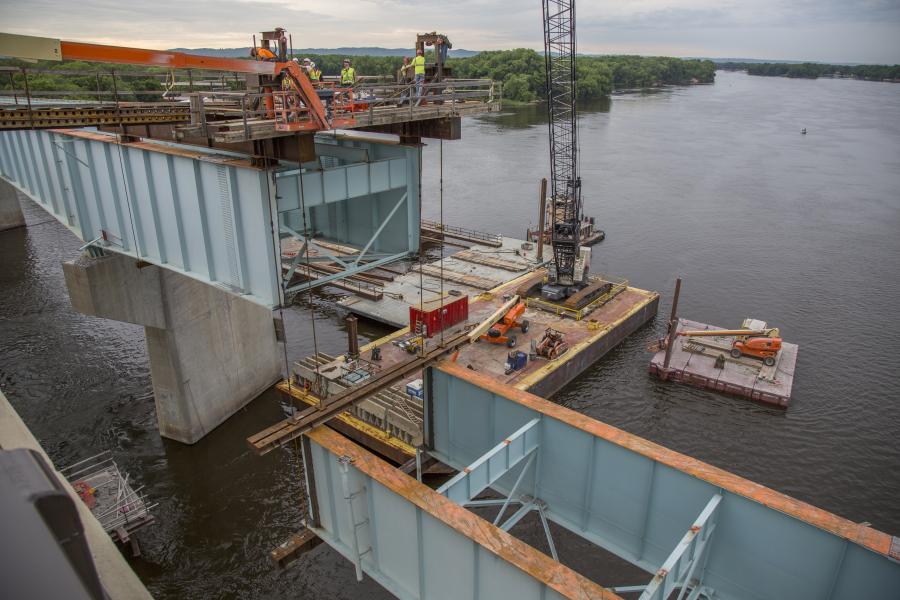 Crews remove sections of the existing bridge and place them onto a barge.

Wider shoulders, fewer stop signs to create continued traffic flow and structural improvements all contribute to enhanced safety on new bridges and traffic system of the interchange of Highway 61 and Interstate 90 where travelers can cross from Dresbach, Minn., to La Crosse, Wis., over the Mississippi River.

Crews have been working on this $187.5 million project since late 2012. Prime contractor Ames Construction of Burnsville, Minn., has been working closely with the Minnesota and Wisconsin Departments of Transportation to ensure construction is completed on time.

The I-90 bridge over the Mississippi River is a heavily used commuter route with about 20,000 travelers crossing the river daily. The next nearest crossings are 5 mi. (8 km) south and 24 mi. (38.6 km) north, making this an important regional crossing. The existing bridge was completed in 1967, then, about 10 years later, construction on I-90 was completed, creating the longest Interstate Highway, stretching from coast to coast.

The primary purpose of the project is to provide a river crossing on I-90 that is structurally sound and meets current structural and geometric standards, and to provide a reconstructed interchange that improves traffic safety, capacity and access on and between Highway 61 and I-90.

Two separate bridges are being constructed over the Mississippi River parallel and upstream from the existing bridge. They will be post-tensioned concrete box girder structures, using 8,000 psi concrete, over the main river channel and precast concrete girders over the back channel. The Mississippi River bridges will be considered 100-year bridges that will consist of stainless steel rebar on the deck and railing, instead of epoxy coated, said Mark Anderson, project manager of MN/DOT. A total of 82 pre-stressed concrete beams will be used in the bridge over the east channel, which are 82 in. (208 cm).

Currently, the eastbound bridge is open, allowing traffic to travel head-to-head, while the westbound bridge is expected to be open later this summer. Nov. 15 is set as the completion date. Demolition also has begun on the existing bridge.

The final interchange configuration, which includes seven additional bridges, will provide full movement with no signals between I-90 and Hwy. 61 as well as access to the Traveler Information Center and boat launches from all directions. A fly-under ramp from westbound I-90 to southbound Hwy. 61 will allow continuous movement with no competing traffic.

One of the key improvements is the interchange that connects Highway 61 with I-90. There were several areas along this route where motorists had to stop for stop signs, said Mike Dougherty, public affairs coordinator of the Minnesota Department of Transportation.

Now there will be a curved ramp to take traffic through to La Crescent, tying in adjoining connections, including a traveler information center on the Minnesota side, with few stops.

There also was not a lot of merging lane along a curved ramp from Highway 61 north to connect to eastbound I-90, which also will be improved, Dougherty said. “If you were traveling westbound, there were some stop signs and sometimes people were coming off and were not aware of that and if someone was coming out of the rest area at the same time it would cause a T-bone crash. There should be fewer issues now. For a while it was not clear where the curved ramp would be going. The new construction will tie them together so the interchange will make more sense to motorists. There was a lot that needed to happen.”

“The river isn't tremendously wide but there are a lot of back channels. The bridge is shorter on the Minnesota side but there is still a fair stretch when you get into Wisconsin,” Dougherty said.

The existing I-90 bridge is a steel girder bridge carrying four lanes of traffic with narrow shoulders that cause lane closures when vehicles are stranded or during routine maintenance operations.

“If there was any ice that caused a crash, it would stop traffic on the bridge, creating a challenge for law enforcement to get through and causing traffic to back up,” Dougherty said. “Snowplows also faced a challenge to get through.”

The two bridges over the Mississippi River were deemed to be in need of replacement due to the narrow shoulders and their age. The bridge was deemed fracture-critical, though there were no issues with the structure.

Dougherty said that Chapter 152 Bonding Money, which came about when the 35W Bridge collapsed in Minneapolis a few years ago, is used to monitor fracture-critical bridges to determine if there is a need for repairs or replacement. “There were no problems at this point but the elements take a toll on steel and concrete and we can do maintenance to prolong the life of the bridges but we deemed that this one was due for replacement.”

So far construction has gone well with some minor setbacks early on. During the spring of 2014, extensive flooding and cold and snow in early November slowed down construction but workers were able to stay on track by working through the night. “Extensive rain slowed down workers but it didn't set the project back significantly. So the project is on time and moving ahead,” Daugherty said. “Early on there was a lot of night work but that has slowed to a minimum. Now if there is something that needs some temporary highway closures workers may have to do something in the evening.”

Crews also worked through previous winters, though not as much this past winter, Daugherty said. “If it got too cold the crews were pulled, but they dressed well for the weather. It was during the 2014 to 2015 winter that a lot of the steel work went up to keep the project on track. Crews braved some harsh elements to keep the project going and on time.”

It also was in 2014 that construction on the Dresbach Bridge became visible to the public. Crews completed all nine piers in the river for the eastbound river crossing, and westbound piers 3 through 9. Westbound piers 1 and 2 were under construction. Concrete pours began to form the superstructure of the eastbound bridge, according to information from MN/DOT.

Included in the overall project are seven additional bridges. Two of which are long, curved steel beam bridges that carry eastbound and westbound I-90 traffic over Highway 61 and the Canadian Pacific Railroad lines, said Mark Anderson, project manager of MN/DOT. There are two more curved steel bridges that carry westbound I-90 traffic to northbound and southbound Highway 61.

Beginning in May of 2015, crews placed four sets of steel beams for one bridge over the Canadian Pacific Rail Road, and five sets for the other bridge. More than 11,000 ft. (3,352 m) of steel beams plus more than 20,000 bolts were used to construct the two 1,250-ft. (381 m) bridges. This work required close coordination with the Canadian Pacific Railway.

Crews, which totaled up to 210, began building the actual structural part of the eastbound Mississippi River Bridge in 2014, which is a cast-in-place cantilevered segmental concrete bridge. Crews used a newer technique for the area by bringing two sets of “travelers” on site in April to complete this work.

The traveler, which is a movable form that allows concrete to be poured to cast each segment of the bridge superstructure, made it easier for crews to work in this congested area. Railroad tracks, the river and bluffs on the Minnesota side and backwater and marshy area on the Wisconsin side, made it difficult to load and unload precast concrete segments, Daugherty said. “The traveler sits on barges and casting was done in both directions to where it now connects. It seemed to work well.”

During November of 2015 the new eastbound river bridge was opened, with the completion of the west abutment, pier 4, and 28-segments along with two cast-in-place segments on falsework sections on the new eastbound Mississippi River Bridge. Four closure pours that required a high degree of precision were completed, along with some painting and the installation of lights on the new bridge.

Significant progress also was made in 2015 on the new westbound river bridge, with the completion of 80 segments, along with one cast-in-place segment on falsework, information from MN/DOT states.

During the winter of 2015/2016, Ames Construction proceeded to drive piling for the east and west abutments of the river bridges. They also constructed the east abutment and continued to build piers for the bridges on westbound and eastbound I-90 that runs over the railroad tracks. Crews constructed retaining walls for the abutments for both of these bridges.

A trail system also is being enhanced to ensure safety for those traveling through the interchange.

The Mississippi River Trail, MRT, is a bicycle and pedestrian pathway that follows the Mississippi River from Lake Itasca to the Gulf of Mexico. The MRT runs right through the heart of the Dresbach Bridge and interchange project. Currently, the trail weaves its way through the interchange configuration along the narrow shoulders, crossing high-speed traffic at challenging angles.

The final configuration will provide safe access for users on a 10-ft. (3 m) trail through the interchange without a single crossing with highway traffic. A modified trail system and pedestrian bridge connects riders using the Hwy 61 shoulders south of the project to the dedicated bicycle and pedestrian path on the north end of the project. In addition, access is improved to the Rest Area/Traveler Information Center for users of the trail, information from MN/DOT said.

Demolition of the existing bridge connecting Dresbach, Minn., to La Crosse, Wis., over the Mississippi River began in April 2016 and will take just over a year to remove. Completion is set for June 2017. To remove the bridge it can't just be dropped into the water, Dougherty said, so crews will cut the truss into sections and lift the sections using what looks like four automobile jacks, one on each corner, and lower it onto barges. Each section weighs 1.2 million pounds; the middle section was about 300-ft. long.

“We haven't ever done that size before so when the first section was lowered in May, there were lots of people reviewing and running calculation. They felt certain this would work,” Dougherty said. “They lowered the structure 30 inches every 15 minutes. It was slow enough that you could discern it was moving, but slowly. … The process went smoothly.”

When the section reaches the barges, workers cut it into smaller portions and load it onto another barge and dispose of it properly, Dougherty said.