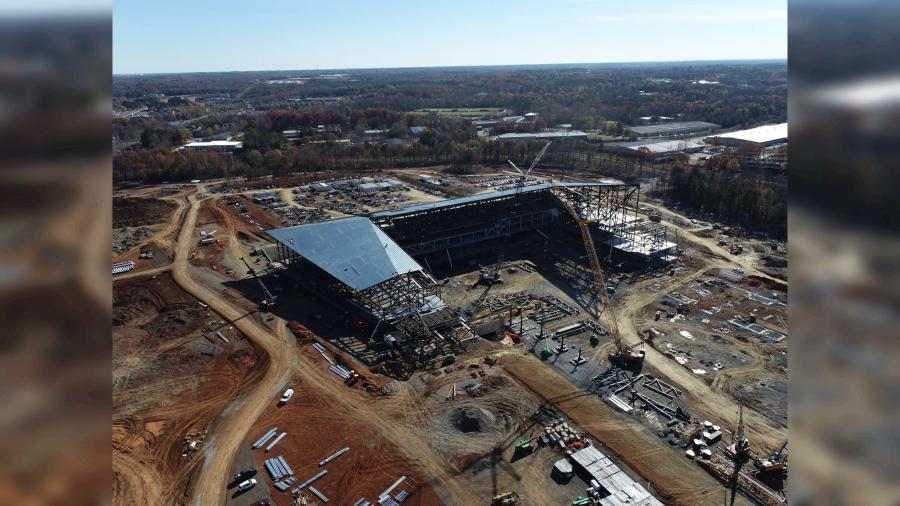 Looking southwest at the headquarters and pavilion from the future I-77 off ramp in this November 2021 photo.

Billionaire David Tepper is the owner of both TS&E and the NFL team.

The first phase of the construction was slated to be completed in 2023, but the city of Rock Hill did not make its initial payment, which was due in March 2021, according to a Charlotte Observer source. TS&E continued construction but never received the payment from the city.

"We are committed to bettering the Carolinas community that supports our team and players," TS&E said in a statement. "To that end, while GT Real Estate Holdings LLC has invested more than $170 million into the development in Rock Hill, our partners have been unable to contribute the agreed upon investment to fund the construction of the public infrastructure.

"Given the economic realities, the difficult but prudent decision has been made to pause the project. The on-going work will continue with our partners to find an economically acceptable solution for all parties to continue this project in Rock Hill."

The awaited investment from the city was expected to fund the project's infrastructure, which includes roads, water and power lines and sewage, the source said. TS&E will continue to pay all the workers on the site and extend their wages a week from the moment the project was paused.

But Rock Hill City Manager David Vehaun told the Observer in a phone interview that to his knowledge, "the city has met all financial obligations we're required under the agreement."

It is unclear exactly how much money the South Carolina city, just across the state line from Charlotte, has yet to contribute to fulfill its obligation.

A little after 4 p.m. March 7, Rock Hill Mayor John Gettys said he had recently spoken with team officials, the newspaper reported. He was told that the Panthers plan to evaluate the project given recent economic variables like COVID and inflation.

"We're going to sit back and wait to see what they plan to do," Gettys explained.

As for whether the entire Rock Hill project is in jeopardy, Gettys said it is up to the NFL team.

"That's really a question for them," he said to the Observer. "That's not my impression from our conversation."

He added that it is not a question of city commitment; rather, Rock Hill agreed to put decades of potential tax revenue from the project toward promised infrastructure upgrades for the Panthers' facility. In addition, Gettys noted that the city, York County and state have all been part of various economic incentive agreements to lure the team headquarters to South Carolina.

"We were all-in from the beginning," he said.

The Panthers broke ground on the 240-acre property in July 2020. The planned 700,000-sq.-ft. training facility at the site, just off Interstate 77, is designed to include an indoor practice field and is expected to help promote growth in the surrounding area, while also improving the environment for the team.

It also would be one of the largest facilities in the NFL — if not the largest — and compete with the Dallas Cowboys' headquarters in Frisco, Texas.

When the Observer toured the facility, nicknamed "The Rock," last August, 340 construction workers were on-site to help in its building.

While the facility is primarily a place for Panthers' players to train and practice, it also will be a sports-and-entertainment venue with the potential to hold a variety of events, from soccer games to high school sports championships, corporate events and concerts.

That was one of the biggest draws for Rock Hill, the city told the Observer.

South Carolina offered about $115 million in incentives for the Panthers to move their headquarters from Bank of America Stadium in uptown Charlotte. In total, the team has said it is investing more than $1 billion to develop and build the facility.

However, since starting construction, the project has run into multiple issues. It was initially supposed to open in August 2022, but the COVID-19 pandemic caused delays.

The team had previously warned York County that the project would be in jeopardy after the city of Rock Hill missed its payments.

The Charlotte news source learned that in May 2021, Panthers COO Mark Hart sent an email to York County Manager David Hudspeth asking for help. Hart wrote that team officials were concerned that without the county's help, Rock Hill would not secure the necessary $225 million in bond money needed for the project.

Without funds from the bond, there is "a high-risk necessary infrastructure objectives will not be met," he noted in the email.

In a statement issued March 7, York County said it was aware of the football team's announcement.

"Although York County is not responsible for funding the infrastructure at the site, county staff is in communication with the Carolina Panthers, and hopes to work toward a solution that protects county taxpayers," the statement read.