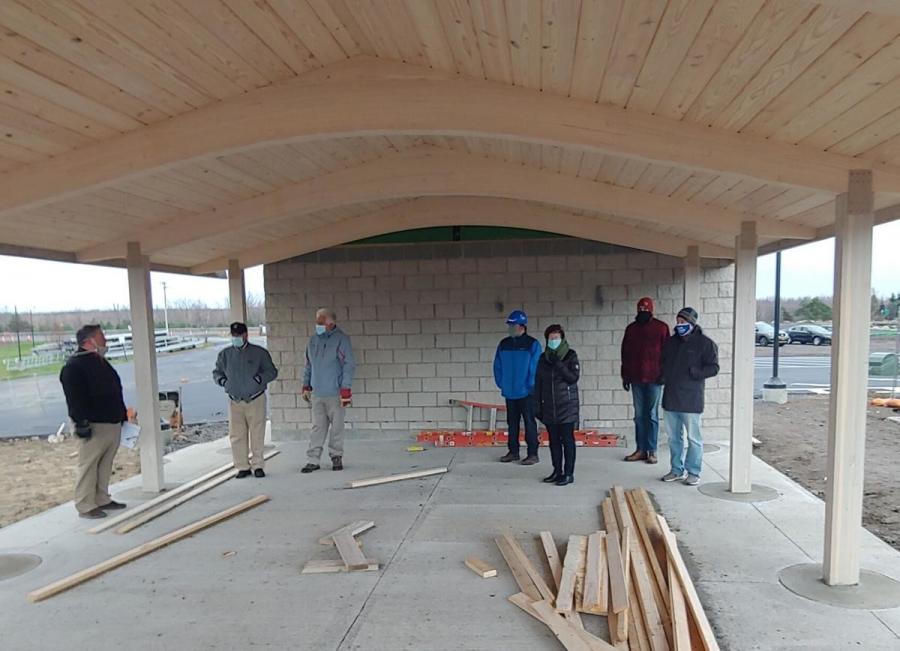 Representatives from the towns of Massena and Louisville and village of Massena toured the progress of work at the Massena Intake Boat Launch and Park. One of the buildings under construction is a small picnic pavilion.

Representatives from the upstate New York towns of Massena and Louisville, and village of Massena, received an on-site update of progress being made on improvements at the Massena Intake Boat Launch and Park on the St. Lawrence River.

The late November tour was led by Stephen M. Schoenwiesner, manager of relicensing and implementation for the New York Power Authority (NYPA). The facility upgrade is one part of the $7.5 million in new recreational facilities secured during negotiations of the 10-year review of the NYPA's 2003 license to operate the St. Lawrence/FDR hydropower facility.

The site enhancement has included expanding the capacity of the existing boat launch, constructing two new picnic pavilions and installing a new permanent dock, permanent and seasonal piers, and restrooms. The site, which is used for major fishing tournaments that are scheduled for Massena, also will have expanded accessibility and parking.

A series of new pilings has been driven at the adjoining shoreline along the intake, extending to the river, where a new aluminum boardwalk/dock will be installed. New permanent and seasonal piers also will be attached in that area.

"A second set of new pilings was also driven, extending from the shore to the top of the adjacent slope, which will accommodate a new ADA-accessible ramp that will connect the parking lot to the new shoreline dock," explained Schoenwiesner.

Also, under construction is a 24-by-36-ft. picnic pavilion that consists of a roofed concrete pad and an adjoining masonry block restroom building. The slab, masonry block walls, roof pillars and wooden roof sections are in place. He said remaining construction work includes the top layer of the roof and installation of doors, plumbing and electrical fixtures.

A second 40-by-60-ft. open picnic pavilion also is being built. It will consist of a roofed concrete pad equipped with retractable wind screens, and an adjoining masonry block building with restrooms and a food preparation area.

The slab, masonry block walls and roof pillars are in place, and the remaining construction includes the entire roof, as well as doors, screens, food preparation equipment, plumbing and electrical fixtures.

The pavilions are scheduled to be completed by the end of the year, with the remainder of the project wrapping up in May or June of 2021.

The project has been several years in the making after a meeting had been held in Massena in July 2016 to solicit suggestions for the work.

The funding also is being used for projects in the village of Massena, town of Louisville, town and village of Waddington, and the Massena and Madrid-Waddington school districts.