Work to Step Up on Building Long-Awaited Roundabout in Portland, Maine 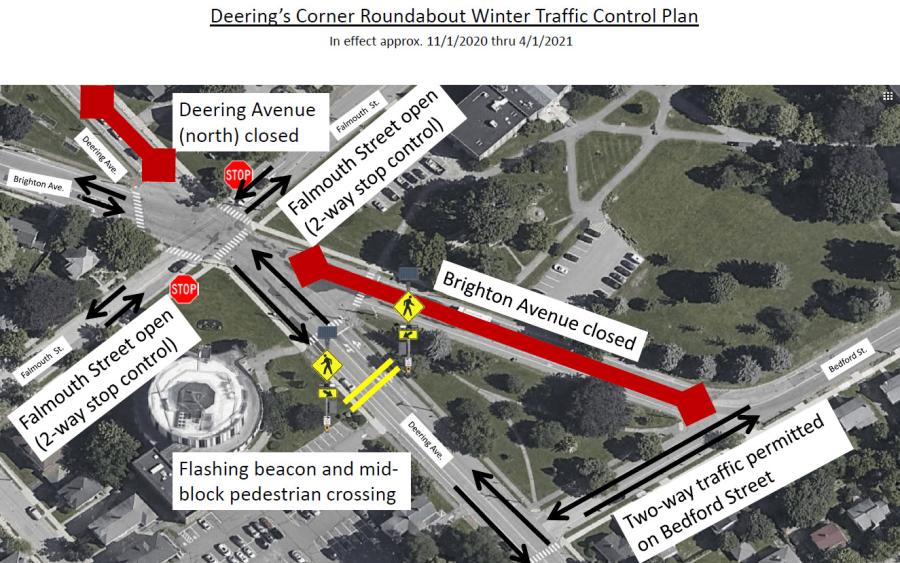 Construction soon will move into high gear on a long-awaited roundabout project in Portland, Maine, disrupting traffic flow at the intersection of Deering Avenue, Brighton Avenue and Falmouth Street.

Work initially began in May 2020 on the heavily traveled corridor near the University of Maine School of Law. City planners for years have been hoping that a traffic circle will decrease traffic congestion at the intersection and improve safety for cyclists and pedestrians.

On April 7, construction workers will remove the jersey barriers currently in place as they transition from winter to spring operations, city officials said in a recent press release. Falmouth Street will be closed at its intersection with Deering and Brighton avenues, and the northern leg of Deering Avenue will be closed starting at the intersection.

Those closures will apply only to non-local traffic and will last for two to three months.

Portland has been planning what's being called the Deering's Corner Roundabout since at least 2013, when city staff recommended a traffic circle there and at the nearby corner of Deering Avenue and Bedford Street. At the time, the Maine Department of Transportation (MaineDOT) estimated that more than 10,000 vehicles passed through the area each day.

The state agency also had labeled the six-way intersection a "high crash location." City officials also have said that "the existing signalized intersection encourages fast speeds and potentially dangerous turning movements." Twenty-seven accidents occurred there between 2016 and 2018, according to MaineDOT.

In the 2020 construction season, crews installed storm drains and water mains, and removed the existing traffic signal, according to the Portland's website. Traffic was altered this winter because of the lack of a traffic signal.

Before construction began, city officials estimated that the work could run into October 2021. In its update the last full week of March, the city said normal traffic could resume after two to three months, once the roundabout is in place. That would put its completion somewhere in June or July.

As depicted in city plans, the project also eliminates the southern leg of Brighton Avenue that used to link directly to Bedford Street. That would make the roundabout a five-way intersection, rather than a six.

The new roundabout is a joint project between the City of Portland, MaineDOT and the Portland Area Comprehensive Traffic System, a federal municipal planning organization. As of February 2020, the project was estimated to cost $3.9 million, of which Portland's share is $985,200.