Work Will Accelerate on New Cattleman's Bridge North of Jackson 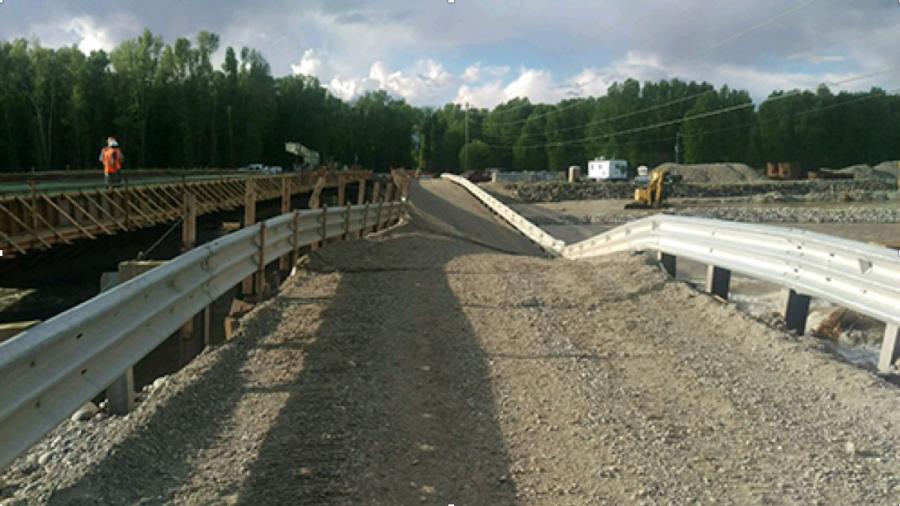 The closure was in response to unsafe conditions and potential catastrophic failure of the temporary structure due to the sinking of one of the structure’s piers.

The Wyoming Department of Transportation and Teton County recently closed the temporary bridge that was carrying traffic over the Gros Ventre River while the permanent structure, Cattleman's Bridge, is under construction. The closure was in response to unsafe conditions and potential catastrophic failure of the temporary structure due to the sinking of one of the structure's piers.

The sinking of the pier was caused by scouring, or erosion of the foundation of the pier, due to high water flows from the spring runoff in the Gros Ventre River. Work was immediately initiated to divert the water flow away from the pier to prevent a total collapse.

The flow of the Gros Ventre River appears to have peaked, hopefully minimizing the potential for additional damage.

“Our biggest concern was the safety of the traveling public. When it became apparent that the scouring would not subside, crews began working on diverting the water flow. A failure of the temporary bridge would cause harm to crews working in the area and potentially damage the new structure that is under construction,” WYDOT District Engineer Keith Compton said.

After meticulous inspection from both WYDOT and the contractor, Reiman Corp., it was decided that the damage to the temporary bridge was too substantial to safely reopen. Instead, WYDOT and contract crews will be accelerating work on the new structure, by bringing in more manpower and resources.

“The temporary bridge was constructed only to carry traffic until the new bridge was completed — the new structure has been designed to current standards, which includes resistance to anticipated future scouring,” Compton added.

Emergency services to areas served by Cattleman's Bridge will be maintained via Highway 89, Spring Gulch Road, and Sagebrush Drive. Emergency vehicles will have priority access through the roundabout construction at Gros Ventre Junction.

WYDOT and contract crews from Reiman Corp. are asking for the public's patience and help during construction. Engineers are asking that the public stay clear of the Cattleman's Bridge area, as there will be an acceleration of activity and mobilization in the area while crews work to open the new structure.

“The damage and closure of the temporary bridge is truly unfortunate, but public safety is our first priority,” said Sean O'Malley, director of Teton County Public Works.

“The contractor is working to finish the project as quickly as possible, and we sincerely appreciate the patience of all the residents that are affected by this temporary closure,” O'Malley added.

The contract was awarded to Reiman Corp. in October for $3.8 million. The Teton County bridge is on Spring Gulch Road north of Jackson. The project is part WYDOT's Bridge Replacement Off System program where WYDOT partners with local counties to replace deficient bridges off the state highway system.