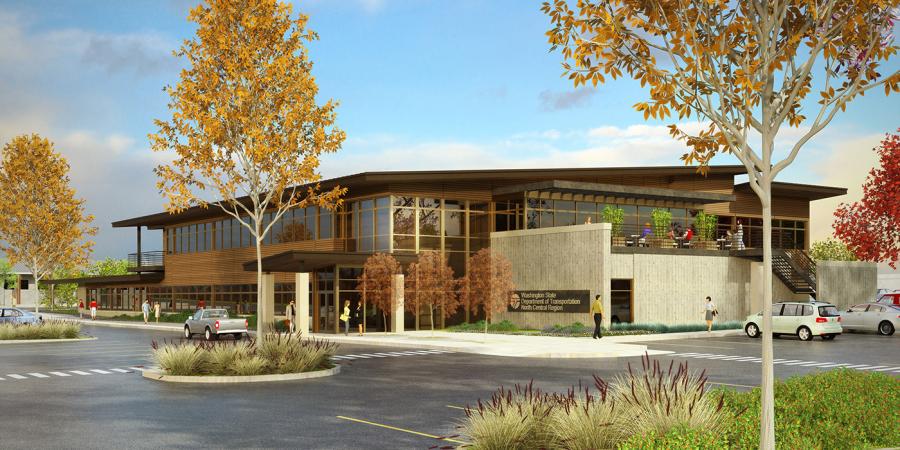 Local residents joined Wenatchee Mayor Frank Kuntz for a ribbon cutting ceremony with the Washington State Department of Transportation on April 23. The event, was to commemorate the opening of a new North Central Region headquarters at WSDOT's Olds Station campus in north Wenatchee.

The ceremony was held at the front entrance to the new building at the corner of Euclid Avenue and Gunn Road in Olds Station. This event marks the final stage in the move of WSDOT facilities off Wenatchee Avenue, allowing the site to ultimately be redeveloped and returned to the city tax roll.

The new regional office building will consolidate administration and engineering, housing both the Region Office and Project Engineering staffs. The original 1934 North Central Region headquarters building on North Wenatchee Avenue is in poor condition and would have been prohibitively expensive to renovate. The used, modular Project Engineering offices located at Olds Station were only intended to be temporary back in 1984 and were in need of major repairs.

WSDOT will save money and improve efficiency by co-locating staff, facilities and functions into one building.

The new region headquarters is one of several Connecting Washington transportation projects completed over the past year, bringing safety, economic, environmental and mobility improvements throughout the state.

Construction on the $8.7 million, 30,000 sq. ft., two-story building for 130 employees began last April. The project, was completed on time and on budget, under the contract awarded to Garco Construction Inc. of Spokane on Oct. 3, 2016.