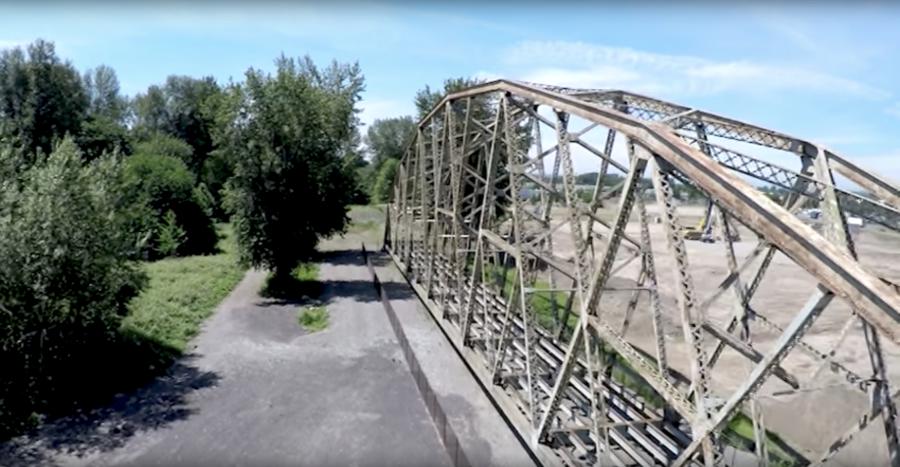 Originally built in 1925, the bridge was decommissioned in 2015 after a new bridge was built and opened to the traveling public.

For more than eight decades, the Meridian Street Bridge over the Puyallup River served as a portal for cities along the Puget Sound to the semi-rural, agricultural community of Puyallup, Wash. Now, this historic bridge is up for donation.

Originally built in 1925, the bridge was decommissioned in 2015 after a new bridge was built and opened to the traveling public. It has been removed from its long-time location spanning the Puyallup River and is now sitting in storage on nearby WSDOT property.

Prior to removal from its original location, the Puyallup River/Meridian Street Bridge was the longest (371 ft.) riveted steel Warren through-truss span built prior to 1940 remaining on the Washington state highway system. It is very likely unique, although similar to the “Turner Truss” patented in the 1920s.

Unlike the standard Warren truss, this bridge has parabolic top chords (allowing for a longer span length), alternating diagonal truss members, longitudinal braces between diagonals in alternating panels, and vertical struts adjacent to the portals. Its subdivided panels and the addition of longitudinal members at mid-panel heights in five truss panels achieved both strength and economy of steel. In 1991 the portal sway braces and interior panel sway bracing were modified to increase vertical clearance from 14 ft. 7 in. to 18 ft. 7 in. to accommodate oversized traffic.

Maury M. Caldwell, a Virginia native, designed the Puyallup River/Meridian Street Bridge for Pierce County. In addition to that bridge, Caldwell designed other significant bridges in Washington, including the 1,410 ft. Pasco-Kennewick Bridge (1922). Caldwell practiced engineering in Seattle and Tacoma from 1905 until shortly before his death in 1942.

If you are looking for a unique way to preserve Washington's history, relocating and restoring this historic bridge is for you.

The bridge is available for donation to a governmental or responsible private entity. The responsible party taking the bridge must agree to:

• maintain the bridge and the features that give it its historic significance and continued eligibility for the National Register of Historic Places; and

• assume all future legal and financial responsibility for the bridge, including providing an agreement to hold WSDOT harmless in any liability action.

This offer to take ownership and relocate this bridge from a WSDOT storage location is available until June, 2019.

WSDOT will dispose of the steel truss if, after June 2019, no preservation sites or reasonable and sufficient funding sources have been successfully identified for the permanent preservation of the bridge.