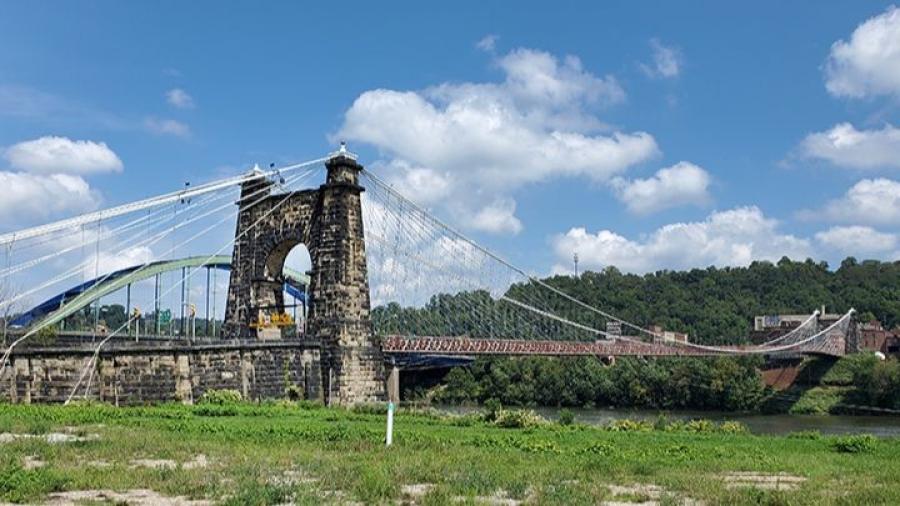 Advantage Steel & Construction LLC was awarded a contract to make necessary repairs to the historic bridge’s superstructure and substructure, replace any damaged suspension cables, renovate lighting, and clean and paint the span.

City officials in Wheeling, W.V., got the word they had been waiting for from Gov. Jim Justice's office on Aug. 30 that a bid had been awarded to repair and rehabilitate the city's historic Suspension Bridge over the Ohio River.

Justice said in a statement that the West Virginia Division of Highways (DOH), a part of the state's Department of Transportation (WVDOT), had awarded a contract to Advantage Steel & Construction LLC, in Saxonburg, Pa., to make the necessary repairs to the Wheeling Suspension Bridge's superstructure and substructure.

The $17.9 million rehabilitation project also will replace any damaged suspension cables, renovate the lighting, perform a structural cleaning, and do a complete painting of the Ohio River bridge.

"It is absolutely fantastic news for the city of Wheeling to know that its most iconic structure, the Suspension Bridge, is going to be fully repaired and rehabilitated," Wheeling Mayor Glenn Elliott said in a statement. "I applaud the effort of the governor and his team at the Division of Highways to secure the funding for this critical project. Without his leadership, the future of this irreplaceable public treasure could have remained in jeopardy."

The future of the historic 1849 bridge had remained in limbo over the past two years. The structure has been closed to vehicle traffic since motorists repeatedly ignored DOH weight restrictions and warnings on the bridge, according to the Intelligencer, a Wheeling newspaper.

In June 2019, an overweight commercial passenger bus crossed the Suspension Bridge before getting stuck under a barrier. The resulting damage to the river crossing led to a temporary closure of the structure. It reopened a handful of times after the bus incident, only to be closed again each time after similar mishaps occurred. This led to the indefinite closure of the span in September 2019.

Even though the state is committing nearly $18 million to repair and renovate the Suspension Bridge, DOH officials said that contractors will not know whether it is too badly damaged to safely reopen to vehicles, noted the Intelligencer. The department indicated that the contractor would have to begin work on the structure before the extent of the damage can be gauged, and only then will the future use of the span officially be determined.

When the DOH put the renovation project out to bid last year, only a single submission was received for the work. In December, the agency rejected the bid, it said, because it far exceeded the engineer's estimate for the work.

The most recent bid letting on Aug. 10, though, garnered three submissions, with Advantage Steel & Construction finally securing the contract.

State officials said Advantage will repair and renovate the bridge in hopes of repairing it to the point where it can be reopened to motorists.

"I'm excited that this incredibly important project to rehabilitate the Wheeling Suspension Bridge is now in the works," Justice noted in a press release. "This bridge is a landmark piece of our state's history, and I am fully committed to doing all we can to preserve it for generations to come. Through our work on this project, we will restore the bridge back to its historic beauty so it can continue to connect the great community of Wheeling to the world for generations to come."

The Suspension Bridge has served the Wheeling area for many generations over its 172-year history. The 1,300-ft. span connecting downtown Wheeling with Wheeling Island was originally part of the National Road — the first major improved highway in the United States that ran from Maryland to Illinois, the governor's office noted. It was the largest suspension bridge in the world at the time of its construction, and the main passageway to the American West.

"This bridge is an icon," said Jimmy Wriston, the DOH's deputy commissioner. "Being able to preserve that structure is important, not only to the city of Wheeling but to the state as a whole."

The Suspension Bridge repairs are expected to be completed along with other major traffic artery improvements and multimillion-dollar investments in Wheeling spearheaded by the state, according to the Intelligencer. Those projects would include the ongoing Interstate 70 Bridge project and the highly anticipated Wheeling Downtown Streetscape Project.

"As I've said many times, I truly believe that Wheeling is an area full of so much potential it's unbelievable," Justice said. "I will continue to do everything in my power to help draw people in to experience all the goodness that Wheeling and the entire Northern Panhandle has to offer."