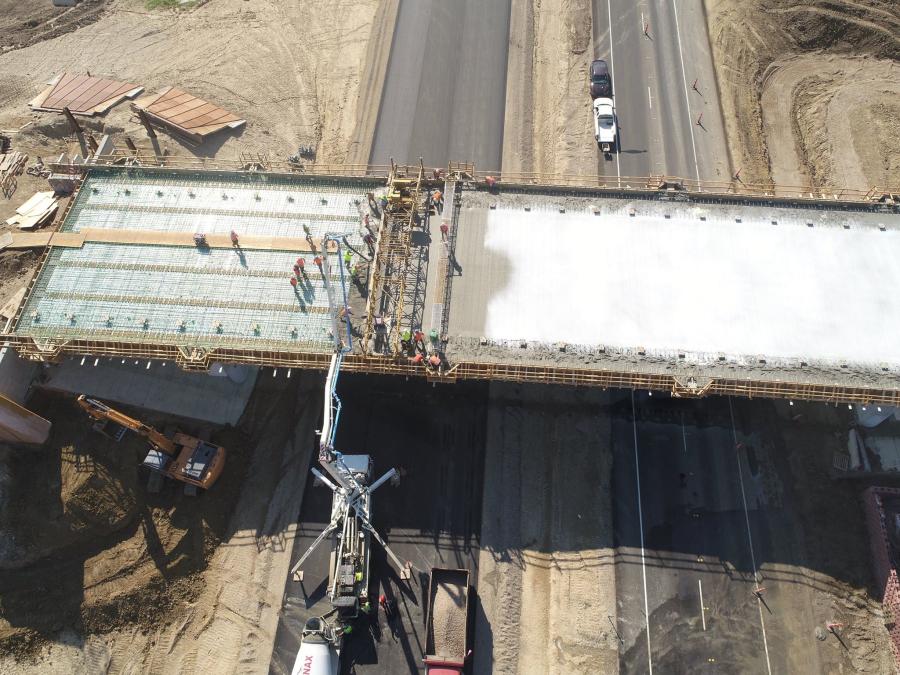 In June, 2016, the Wyoming Department of Transportation awarded a bid to build a new interchange. (WYDOT photo)

Fifty odd years ago when the original Sheridan Interchange was built, it was a fine design for vehicles traveling 50 mph exiting and entering Sheridan, Wyo. Described as a “trumpet interchange,” it led vehicles traveling north in a complete circle when exiting into town. But times have changed significantly, and what worked then doesn't necessarily make sense now.

“Now the speed is 75 mph and you are getting off on very steep incline,” said Ronda Holwell. “You make a complete 180. It wasn't built for cars going 75 mph. The other problem is for cars going south, getting on the interchange, they cannot get up to speed. The vehicle trying to get on going south is going uphill and the most common accident is someone gets rear ended.”

Another common accident is trucks rolling over on the steep and sharp corner when traveling north and exiting into Sheridan.

After years of head scratching and public meetings, in June, 2016, the Wyoming Department of Transportation awarded a bid to the joint venture of Reiman Corp. of Cheyenne, and High Country Construction Inc. of Lander, to build a new interchange. At $46.4 million, it is the largest project let in one sum.

“This is absolutely one of the bigger undertakings by WYDOT,” Holwell said. “It's safe to say it is one of the largest projects WYDOT has ever let at one time monetarily.

The project is divided into four phases, with Phase 1 getting under way last July. The first phase consists of grading operations and dirt work for the new interchange ramps and new interchange bridge.

“This fall they moved about 450,000 cubic yards of dirt,” Holwell said. “There is about a million cubic yards to move. Mostly they've done dirt work. They have moved a lot of dirt via belly dump trucks and loaders and scrapers. They've moved just an astronomical amount of dirt.

WYDOT first started looking to fix the interchange problems in the 1990s and quickly learned solutions were not going to come easy. The current location “serpentines” Goose Creek, and any sort of changes would require new bridges and other structures, adding greatly to the cost. The idea of moving the interchange was controversial because it is located right by the Sheridan business district, Holwell said. “Business owners and residents fought that really hard.”

The state revisited the issue a decade later. Part of the solution was to move the Port of Entry, where all trucks must stop upon entering or exiting Wyoming. That solved some of the problem of the heavy truck traffic, but the interchange remained problematic. And because 90 percent of the funding was federal, the state would have to meet federal standards and requirements to fix the interstate and that wouldn't be possible.

“The only option WYDOT had was to relocate the interchange,” Holwell said. “We started the environmental assessment in 2009. Everything had changed by then. We held multiple public meetings in 2009 and 2010 and finished in 2012. We had the buy-in from all the parties. We moved the interchange one mile north. It's called a diamond interchange and it will become a diamond configuration. There are no sharp curves, and moving a mile north took away the steep incline that vehicles had travel. Now they have another mile to get up to speed.”

“The section leading to the new interchange has a ton of enhancements,” Holwell said. “We're trying to build a gateway into Sheridan. The city is responsible for $11 million of enhancements and the utilities.”

That is set to get under way in 2018. The final phase will consist of isolated reconstruction/widening and new surfacing to the east bound lanes of I-90. The contractor also will complete all enhancements, clean up and reclamation work associated with the project.

“It's a lot of project and that's why it has a three-year completion date of October. 2019,” Holwell said.